Today I have the honor of bringing to you author Stephanie Julian.   Stephanie is author of a number of erotic/paranormal romance stories (several of which have been reviewed on That’s What I’m Talking About). A former reporter for a daily newspaper, Stephanie enjoys making up stories much more than writing about real life. She’s happily married to a Springsteen fanatic and is the mother of two sons, who love her even when they don’t have any clean clothes and dinner is a bowl of cereal. Please help me welcome Stephanie to That’s What I’m Talking About.
Twimom: Stephanie, welcome and thank you for stopping by.
Stephanie: It’s wonderful to be here. Twimom: First off, congratulations on your newest release, What a Goddess Wants and kicking off your new “Forgotten Goddesses” series. (Readers, you can find my review HERE.)  What inspired you to discover and write about Etruscan culture and deities? Can you tell my readers a little more about the Etruscan civilization? (I had to google it!)
Stephanie: Since my dad’s family is from Italy (my grandpop was from Sicily, my grandmom from Rome), I wanted to find a magical tradition that fit with my heritage. I didn’t want to do Wiccan, which is heavily based on Celtic traditions, because almost every magic book I’d read was based on this style. I knew a lot about the ancient Romans because I took four years of Latin in high school (I was pretty much a geek back then. Okay, I might still be a little bit of a geek.). But most people already have a preconceived notion about the Romans. I wanted a tradition I could play around with. And I found the Etruscans, from whom the Romans ripped off a lot of their ideas about government and religion. The Etruscans aren’t all that well known and there’s not so much information out there so I could make up stuff or mold the known details to my own purposes.
Twimom: What are your plans for the future of this HOT series?
Stephanie: There are another two books in the series contracted, How To Worship a Goddess and Goddess in the Middle. I love writing connected series and having favorite characters pop up through the stories. In How To Worship a Goddess, you’ll meet Lucy, Etruscan Goddess of the Moon, who falls hard for a hot, hunky hockey player named Brandon. Why hockey? Because I love it! In my home town, we have an ECHL team and my husband and I have season tickets. In Goddess in the Middle, Amity, Goddess of Health, finds two heroes who come to her rescue when Charun, God of the Underworld, comes after her powers. Remy and Rom are lucani, Etruscan werewolves, who’ve led brutally tough lives and find their special skills needed to save the woman they both want.
Twimom: Yes, sounds HOT! Although you author what I would classify as “paranormal romance,” I would also say you write erotic romance – do you agree? Your sex scenes are very, um… *fans self* titillating. Do you find it difficult writing such sensual scenes? How much time do you spend writing sex scenes, and how do they work into your writing process? 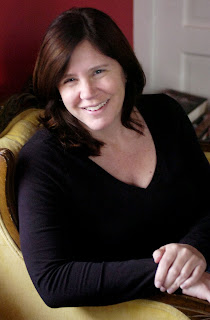 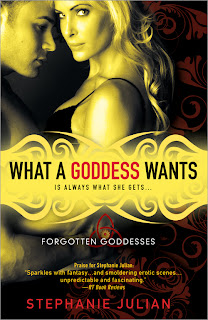 Stephanie: I’m always reading. I usually spend an hour before bed reading. Favorites are so hard because I have so many. In the last year, the books that I’ve kept on my bedside to read over and over again include Meljean Brook’s The Iron Duke, Nalini Singh’s Kiss of Snow, Stacia Kane’s City of Ghosts (I absolutely adore Terrible), Cherrie Lynn’s Rock On and J.R. Ward’s Lover Unleashed.
Twimom: I LOVE The Iron Duke  – my favorite book of 2010! What upcoming 2011 release/s are you most excited to read?
Stephanie: I’m dying to read Brook’s Heart of Steel. And I’m really looking forward to Thea Harrison’s next book, Storm’s Heart.
Twimom: Stephanie, once again thank you so much for taking the time to tell my readers a little bit about yourself and your writing. It was wonderful chatting with you.
Stephanie: My pleasure. Thanks so much for having me.
You can find Stephanie Julian on line at
Her Website
Twitter
GoodReads
Facebook
GIVEAWAY:  I have two (2) copies (two winners) of What A Goddess Wants to giveaway here at That’s What I’m Talking About. Thank you to Sourcebooks (www.sourcebooks.com) for sponsoring the giveaway of Stephanie’s newest release. To enter, please leave a comment and your email at the end of today’s interview. One entry per person. Winners are restricted to US and Canada mailing addresses, only. Contest open from July 27, 2011 until Monday August 1, 2011 at 9:00 PM EDT. Two (2) winners will be selected from the comment entries using random.org. You do not need to be a GFC Follower, but it’s always appreciated.