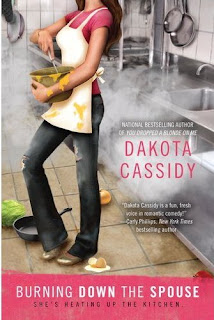 Burning Down the Spouse
Author: Dakota Cassidy
Release Date: July 5, 2011
Publisher: Berkley Trade
Ex-Trophy Wives Series #2
ISBN: #978-0425241080
Genre: Contemporary Romance
Format(s): Paperback (356 pgs), e-book
Book Source: Publisher
After discovering that her famous chef husband was cheating, Frankie Bennett lost her mind-on live TV. Now Frankie is broke, unemployed, and hiding out in her aunt’s retirement village. That is, until Maxine Henderson-Barker-reformed trophy wife and owner of Trophy Jobs Inc. employment agency-arrives to give Frankie a much needed kick in the pants.
Soon, Frankie lands a job as a prep chef at a Greek diner in New Jersey, home to the world’s best meatloaf and an owner who resembles an exquisitely chiseled Greek statue. Falling into bed with Nikos isn’t the best idea, but after years of living in a man’s shadow, this ex- trophy wife is ready to get busy cooking…
As Gikany and Una have expressed before, we are not big on contemporary romance, we prefer it have an element of urban fantasy or paranormal within it. That being said, since Una has read the Accidental Friends series by Dakota Cassidy, she thought it might be fun to give this book a try, especially with the catching title and synopsis. This book, however did not quite live up to our expectations.
Burning Down the Spouse is the second novel in the Ex-Trophy Wives series. You need not read the first book to jump into the series, and we didn’t realize this was the second book until we were getting this review ready. It is a lighthearted contemporary romance, and would definitely be considered a light and quick read. There is some funny banter and moments; however, we had some issues.
Burning Down the Spouse begins with seeing our main character, Frankie, in the middle of her “crazy” after finding out her husband of 18 years is cheating on her. She was forthright and wonderful in her “airing of the grievances.” Sadly, her character turned out to not be the strong, sassy character we were introduced to (and hoping for). She was actually quite timid, battling incredible low self-esteem and plagued by her own pessimism. While her character did seem to fight this through the course of the novel, the battle had a very black-or-white feeling.
One thing that Una would like to point out was the weak dialogue. It was something that normally she might overlook, but was very distracting while reading Burning Down the Spouse. The characters all used a high-school aged vocabulary. For men and women in their late 30s to speak with such, for lack of better term, “immature valley talk” was very annoying. Some may find it very humorous and lighthearted, but we found it not only distracting but annoying. It seems this just might be the author’s voice and it may appeal to some, however it did not appeal to us.
If you are interested in a lighthearted, funny read, give Burning Down the Spouse a try. However, read an excerpt first to see if the author’s voice will appeal to you.

3 responses to “Review: Burning Down the Spouse”