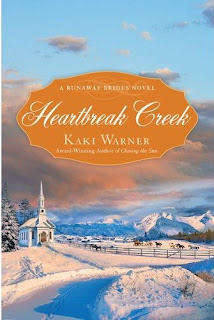 Heartbreak Creek
Author: Kaki Warner
Release Date: July 5, 2011
Publisher: Berkley Trade
Runaway Brides trilogy #1
ISBN: #978-0425241226
Genre: Historical Romance
Format(s): Paperback (384 pgs), e-book
Book Source: Publisher
Honest, hard-working widower, age thirty-three, seeks sturdy English-speaking woman to help with mountain ranch and four children. Drinkers, whores, and gamblers need not apply.
Not very romantic, but after one disastrous marriage, widowed Edwina Ladoux isn’t looking for romance.  What she wants is safety for herself and her half-sister, and a way out of the war-torn South, even if she has to offer herself up as a mail order bride to a stranger a thousand miles away in the Colorado Rockies.  But she hadn’t reckoned on Declan Brodie.
Declan’s first wife ran off with a gambler and was later killed by Indians.  He has no desire to saddle himself with another—and her mulatto “traveling companion”.  But his children need a mother, and he needs help to keep his mountain ranch running, and the proxy papers are already signed.  But there’s something odd about those two. A connection he doesn’t quite understand.  But at least the companion can cook.
Heartbreak Creek by Kaki Warner is the story of a young woman who leaves her home in the war-torn south to become a mail order bride in the wild frontier of Colorado to a widow with four children.
I this book to be a great beach bag read and a fun escape for an afternoon. It was a light easy read with fairly interesting characters and beautiful scenery that was so well described that I could picture everything from the overgrown gardens in war-torn Louisiana to the rugged beauty of the unsettle Colorado territory. It made me laugh out loud in a few places and had me holding my breath in others.
That being said I felt like parts of the book were lacking. The relationship between Edwina and Pru is something I expected to be more fully developed and instead I felt got shelved for other characters like Thomas and Sally. This might have worked had the author not also been trying to explore several other characters at the same time. Leaving a variety of unanswered questions which made it hard for me to continue moving forward, for example Lucinda’s past is touched on but we never really get the back story behind her distrust of men and hate of the wealthy and Maddie’s is portrayed as a starry eyed love struck widow who’s husband, a war hero, is discussed throughout the novel but never fully discussed only to have hints dropped at the end suggesting that maybe it wasn’t all rainbows and flowers after all. Maybe it was the author’s attempt to throw a couple O’Henry twist our way or maybe she was attempting to have several well-rounded characters rather than flat ones but regardless it was unnecessary and distracting in my mind, pulling attention from the main story of Edwina and Declan and even from the secondary stories of Edwina and the kids and Edwina and Pru. Overall I felt as if none characters received the attention they deserved.
Given what I felt were the holes in the story line I can only give this book 3 out of 5 stars. Would I read it again, not likely. But could I recommend it to a friend, sure. If someone were looking for a light, easy, fun read perfect for a summer afternoon at the pool or beach then this book totally works.