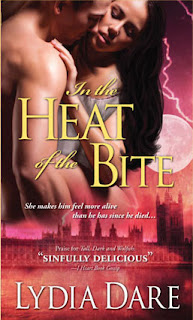 In The Heat of the Bite
Author: Lydia Dare
Release Date: July 1, 2011
Publisher: Sourcebook
Regency Vampyre #2
ISBN: #978-1402245107
Genre: Paranormal Romance
Format(s): Paperback (384 pgs), e-book
Book Source: Publisher
Chivalry is far from undead…
Matthew Halkett, Earl of Blodswell, is one of the few men in the ton who can claim to be a knight in shining armor- because that’s precisely what he was before being turned into a vampyre. When he spies a damsel in distress in the midst of a storm in Hyde Park, his natural instinct is to rush to her aid…
But not every woman needs to be rescued…
Weather-controlling witch Rhiannon Sinclair isn’t caught in a storm-she’s the cause of it. She’s mortified to have been caught making trouble by the imposing earl, but she doesn’t need any man-never has, and is sure she never will…
But when Rhiannon encounters Matthew again, her powers go awry and his supernatural abilities run amok. Between the two of them, the ton is thrown into an uproar. There’s never been a more tempestuous scandal…
The second book of Lydia Dare’s Regency Vampyre Series picks up shortly after the conclusion of It Happened One Bite (review HERE) with Matthew Halkett, the Earl of Blodswell, discovering Coig Witch, Rhiannon Sinclair in the middle of a self-made rain storm. Blodswell, a 650-year-old vampyre, is a valiant knight with a history significant with the Coig, and was a featured prominently in the last Regency story as the maker of Lord Kettering. Rhi is one of the five “sister witches” of the Coig from Edinburgh, Scotland. She has ventured to London to visit her younger sister, who is living with their Aunt Greer.
Although this is the second book in the Regency Vampyre Series, it is the sixth story in Ms. Dare’s paranormal-regency themed world that started with the Westfield Brother’s series.  All of the books are set in the same society and contain many of the same characters. With that said, I feel that the book can be read stand-alone if you don’t want to start at the beginning (I started with the fourth Westfield Brother’s book, The Taming of the Wolf.)  I have to admit, I was a bit confused BECAUSE I had read the earlier books… There was a significant event that occurred to vampyre Lord Kettering at the end of It Happened One Bite, and I was confused why and/or how Blodswell didn’t know about it. Although it was explained later in the book, I found myself wondering why Blodswell acted the way the did when he started “showing symptoms” similar to those Kettering had in the previous book. (Sorry for the vagueness here, but I don’t want to have any spoilers.)
The story was another enjoyable regency piece. Rhi is another strong woman who surrounds herself with close friends and a strong support network. Although she is young, she doesn’t allow others to push her around. I love her interactions with mentor, Duchess of Hythe, who deserves her own backstory – she’s a feisty one! I also love how the Duchess doesn’t take crap from any of the Hadley Brothers (Lycan) or the “evil step-motherish” Aunt Greer.
I fell for Blodswell in the last book and couldn’t wait to read his story. While I had hoped for more backstory and his detailed history, I still felt it was a satisfying and enjoyable tale. Blodswell was a true gentleman, caring for Rhi’s welfare above his own. Good thing Rhi wouldn’t let him get away with that! And *phew* were they HOT together! I enjoyed their forbidden rendezvous quite a lot. Their romance was innocent, yet sizzling.
There are two outstanding side stories I need to mention.  First, the Hadley Brothers (brothers to the hero from book 4). Together the three men/wolves are a riot, but eldest brother, the Viscount Radbourne, is a standout. He is playful and charming, but fiercely loyal and protective. I hope we will see more of him soon.  The second is the beloved Alec MacQuarrie.  For those that have read the earlier books, you will enjoy seeing what has become of dear Alec after the surprising events at the conclusion of the last story.  If you are new to the series, the author does a superb job of bringing you up to speed on his history. Alec is the focus of the next book, Never Been Bit (September 2011), and I look forward to watching him finally discover his destiny.
One thing I will suggest for new readers is to jot down notes to keep track of the characters because there are a lot. And when you toss in the fact that some characters have both given names and titles, it can get confusing. All-in-all another fun, romantic tale from Lydia Dare. I enjoy the paranormal spin on a regency romance.  For me, each story in this series gets a bit better and more enjoyable.

2 responses to “Review: In the Heat of the Bite”