Posted July 11, 2011 by Jen in 4 stars, Rating A, Reviews, Sci-Fi or Fantasy Fiction Tags: Book of the Order, Philippa Ballantine 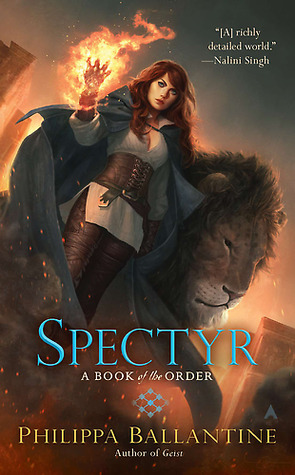 Author: Philippa Ballantine
Release Date: June 28, 2011
Publisher: ACE Fantasy
Book of the Order #2
ISBN: #978-0441020515
Genre: Fantasy
Format(s): Paperback (320 pgs), e-book
Book Source: Publisher
Though one of the most powerful Deacons, Sorcha Faris has a tarnished reputation to overcome. She and her partner, Deacon Merrick Chambers, find themselves chasing down rumors of geists, but long for a return to real action. So they jump at the chance to escort a delegation sent to negotiate the terms of the Emperor’s engagement. Their destination: the exotic city of Orinthal.
But a string of murders has Orinthal on edge, and Sorcha and Merrick are asked to investigate. Meanwhile the Emperor’s sister has unwittingly released a cruel and vengeful goddess, one who it bent on destroying her enemies, including the geistlord who resides inside the shapeshifting rival to the throne—Sorcha’s lover….
Wow – another great story in Ms. Ballantine’s richly-detailed, exotic world of Arkaym! Spectyr picks up shortly after the explosive conclusion of the first Book of the Order, Geist (my review HERE), with the return of key characters and the addition of a few new players. Deacons Sorcha Faris and Merrick Chambers are dealing with the blows of betrayal from within the Order, meanwhile, geist (paranormal) activity has been slow, leaving the pair with little to do. (In Ms. Ballantine’s world, intrusions by creatures from the “otherside” are commonplace and the Order’s Deacons are the “ghostbusters” of society.) Suddenly, strange events begin to occur, leading the Deacons, and a slew of other important players to the desert city of Orinthal.
Just like its predecessor, Spectyr, is full of amazing details, distinctive locals and unique lexicon. It is a beautifully crafted and involving story that requires a reader’s full attention.  The action is intense, and the plotlines are elaborately crafted. I will admit that I had forgotten several details from Geist, but Ms. Ballantine did a marvelous job “reminding me” of key events.
Once again, the three-way bond of Sorcha, Merrick and Raed, the ousted heir to the Empire and Sorcha’s lover, was a focal part of the story.  The bond penetrated the threesome’s actions and grew in sometimes unexpected ways. The emotional impact of their deep connection reverberated throughout the story, leaving me wanting more.
Ms. Ballantine used their bond as a starting point for this story and then expanded the emotional ties to include new characters and situations. The ramifications of the newer bonds pulled on the threesome, causing emotional dilemmas between old and new friends, family and duty. I believe I held my breath more than once!
As events unfold, sections of the Empire began to crumble and I was left wondering what will happen next. Although this book didn’t have what I would term a “cliff-hanger” ending, it did leave many unresolved issues and open-ended plot lines. I cannot wait to find out what will happen to Sorcha, Merrick and Raed, along with the fate of several new an returning characters.  I will warn you, this story is NOT a quick read, and while it may take a bit longer to complete, it is addictive and worth the time!