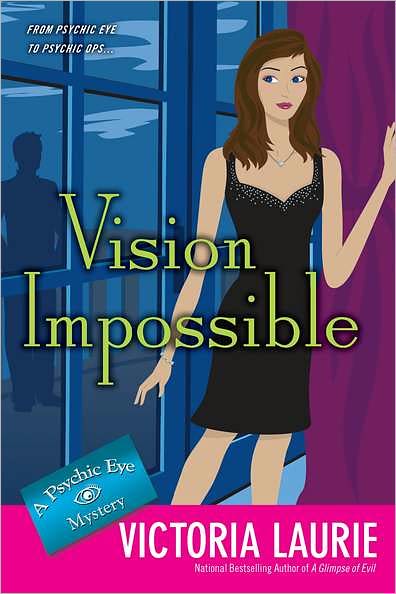 Vision Impossible
Author: Victoria Laurie
Release Date: July 5, 2011
Publisher: NAL
Psychic Eye Mystery #9
ISBN: #978-0451234063
Genre: Paranormal Suspense
Format(s): Hardcover (358 pgs), e-book
Book Source: Publisher
Abby Cooper’s next mission may truly be impossible…
Abby Cooper, the FBI’s newest Civilian Profiler, is adding Spy to her resume. The military’s digital photography software that captures one’s aura- just like Abby can-sits in a drone aircraft that’s been stolen. It’s a major breach in security as every country’s leader can be identified by their aura…
Abby springs into action to stop the criminals before they set their diabolical plan into motion, while making herself a prime target.
Vision Impossible is the ninth book in the Psychic Eye Mysteries.  Gikany and Una did not read the previous books (nor do we anticipate picking them up) so we have jumped into this one blind.  However, that being said as we did our research for this book to put together our review, we noticed that (besides fans either loving or hating this novel) this book was a departure from the previous books in the series.  Abby’s usual friends and crew were not featured, except for her fiancé Dutch.  Therefore if you want to pick up this series with this book, it might be a good starting point.  We do not feel we had missed out on anything by starting here (unless you want to know how Abby and Dutch got together).
We had a very difficult time thinking of how to review and rate this book.  Gikany has come up with a great illustration.  This book is like being on a rollercoaster…the first part is torturously slow, the middle is interesting and the last part is a thrill.  That being said, we must admit to skimming parts of the first third of Vision Impossible (okay, Una skimmed, Gikany was good and didn’t… gold star for her) where the “spy training” occurs.  The plot picks up once they are put in the field, doing the spy work and the drama begins to unfold.  Then at the end where the action explodes, it is fantastic… the end could be taken from a James Bond movie.
One overwhelmingly difficult element that Una faced is her dislike of our main character, Abby the psychic.  We must note: Gikany didn’t find her as annoying as Una did.  Maybe it was reading this book so soon after Burning Down the Spouse (review HERE), but Una felt the main character (who is the voice of the novel) was a bit similar (though not nearly as bad or frustrating as the above referenced book).  But it is hard to truly enjoy a novel when you feel your main character, a professional and mature women, talks about a swear jar, pinky swears, and whose speech reminds you of a high school student.  What saved the book for Una was the spy drama, the intrigue of who stole the device and the mysterious character Maks.
Sadly, this is not a series we can see ourselves picking up.  It is meant to be a lighthearted paranormal mystery type series.  For Gikany and Una, there is too much fluff for our liking.  This book is a departure from that typical storyline, but we assume Ms. Laurie may go back to that.  That being said, Vision Impossible is a good starting place for those that would like to start the series and not feel the need to read the previous books.