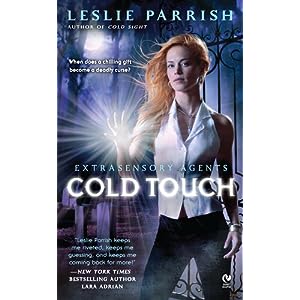 by Leslie Parrish
Signet Eclipse
July 5, 2011
Oh, yeah.  They’d hit pay dirt.
“How many” she asked, not sure she wanted to know.
“Three so far.”
Three people murdered in this small, innocent-looking patch of woods.  And those were just the ones Derek could see on the bike.
What a strange world he must live in and how cautiously he had to tread in it.  Derek never knew when he rounded a corner if he was going to be presented with the violent images of a phantom body flying through a car windshield or someone being flung back after being shot in the chest.  Deaths happened everywhere.  The quiet ones eluded his sight, but the violent ones, oh, they left their mark.
“Are you alright?” She asked.
“Yeah, fine.”  Shaking his head as if to clear it, Derek finally turned to look at the ruins of the old barn, which she’d pointed out to him.
That didn’t help.  His whole body stiffened, his head jerked and a small groan emerged from his throat before he muttered, “Well fuck me.”
“What is it?”
“It’s Liv,” he said, his deep voice not much more than a whisper.  “Young.  Just a kid.  But it’s her, no doubt about it.”
Shocked, Julia followed his stare, even though she knew she’d see nothing.
But Derek definitely did.  He focused on what once had been the side of the barn.  Where, she knew from hearing Olivia’s story, there had once stood a large barrel full of water.  His eyes were narrowed, his teeth clenched, judging by the stiffness of his jaw, but he wouldn’t look away.
“I don’t understand.  She’s not dead,” Julia said, confused, as she often was by the abilities of these people she worked with day in and day out.