Dear Readers, Today I have a special treat for you… A guest post from author Justin Gustainis. Justin grew up in northeastern Pennsylvania and is now a college professor living in upstate New York. Prior to his career in academe, he was, at various times, a soldier, garment worker, speechwriter and professional bodyguard. His books include the novels THE HADES PROJECT (2003), BLACK MAGIC WOMAN (2008), EVIL WAYS (2009), SYMPATHY FOR THE DEVIL (2011) and HARD SPELL (2011), as well as an anthology he edited, THOSE WHO FIGHT MONSTERS: TALES OF OCCULT DETECTIVES (2011).  He is a graduate of the Odyssey Writing Workshop.  Please help me welcome Justin to That’s What I’m Talking About. 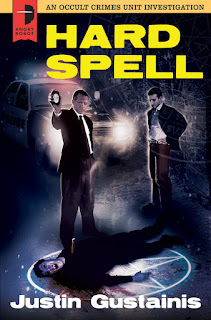 Q. How many urban fantasy writers does it take to change a light bulb?
A. One can do it, but two is safer.
Chloe Badass knew she should wait to change the bulb until her partner Raoul returned from the Vampire Council meeting. But there were ghouls living in this part of the city, and Chloe knew that they hated bright light.  She unscrewed the dead (or was it undead?) light bulb and was reaching for a new one when she smelled the fetid odor from the breath of the ghoul who had just sneaked up behind her.
Q. How many crime writers does it take to change a lightbulb?
A. That’s the question, ain’t it, Louie: how many?  And you’re gonna tell us — either before Bruno here goes to work on you with that blowtorch, or after.
Q. How many techno-thriller writers does it take to change a light bulb?
A.  The bulb had to be changed, and quickly.  Viewing it from 800 yards away through the GE Model 19 Omnispectra Night Scope, Ryan could see that the one in place now was a Hasselbad D-44, produced in limited numbers by a secret factory in Stuttgart and issued only to elite SS units in 1943.  That it was still burning showed just how close the Nazis had come to winning the war, but even the D-44 wouldn’t last forever.  Ryan had a Series IV Omnispectrum Illuminator from Bell Labs stashed in his Captain America backpack, which had been purchased in Wal-mart but made in China by slave labor.  If he did not replace the D-44 with the new state-of-the-art bulb within the next eighteen seconds, the world would be forever plunged into darkness.
Q.  How many Western writers does it take to change a light bulb?
A.  If you think they had light bulbs in Deadwood back in the 1870s, Slim, you probably ought not to be writing Westerns.
Q. How many erotica writers does it take to change a light bulb?
A. “Stick a fresh bulb in there, darling – quickly,” Clarissa said, her voice a caress.  “I want you to see everything that Susan and I are doing to you.  Not to mention what Sharon will be doing, and Hans.  Mistress Victoria, too.  And the twins, who will be here any minute now.”
Thank you Justin for a little humor break today! I especially enjoyed the erotica one!
Here is more information about Justin’s latest release, HARD SPELL: 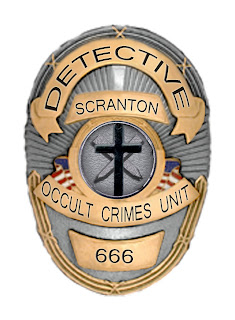 In this “alternate” universe, the supernatural really exists, and everyone knows it.  Supernatural creatures are acknowledged, if not always welcomed.  America’s “supe” citizens have rights now, but that also means they have to obey the law.
Like the rest of America, Scranton, PA has an uneasy ‘live and let unlive’ relationship with the supernatural. But when a vamp puts the bite on an unwilling victim, or some witch casts the wrong kind of spell, that’s when they call Stan Markowski, a Detective Sergeant on the Scranton PD’s Supernatural Crimes Investigation Unit. He carries a badge. Also, a crucifix, some wooden stakes, a big vial of holy water, and a 9mm Beretta loaded with silver bullets.
Somebody’s been killing vampires in Scranton.  Stan would be inclined to cheer, but the bodies all have occult symbols carved into them, suggesting black magic at work.  It turns out that a renegade wizard is using the vampires as sacrifices, part of the ultimate evil spell.  If the conjuration is completed, Bad Things Will Happen.  That’s why Stan is determined to find and stop this evil magician – at any cost.  But Stan doesn’t realize just how high that cost will be.
Thanks once again to Justin for stopping by. You can find Justin at his website: http://www.justingustainis.com/