Please welcome my friend, VampBard who wrote today’s review of… 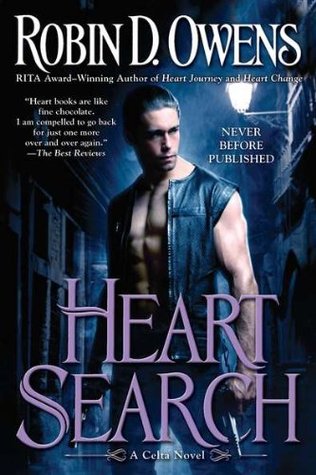 Heart Search
Author: Robin D. Owens
Release Date: August 2, 2011
Publisher: Berkley Trade
Heart Book Series #10
ISBN: #978-0425241387
Genre: Paranormal Romance
Format(s): Paperback (368 pgs), e-book
Book Source: Publisher
Laev T’Hawthorn — one of the highest nobles in the land — must rebuild his life after a devastating mistake.  He married a woman he believed was his HeartMate, only to learn she was a greedy social climber.  She callously used him, stealing his family heirlooms.  He is determined to reclaim all that he has lost — beginning with his self-respect.
Abandoned at fifteen, Camellia Darjeeling values her independence above all.  She’s fought to establish her own businesses — elegant tearooms — only to have her father and uncle re-enter her life.  They emotionally scourge her and extort money.  Trusting men, even her HeartMate, is too risky.
When Laev and Camellia meet, they refuse to acknowledge that they are true HeartMates.  After her shady relatives are implicated in the theft of Laev’s property, Camellia and Laev’s lives become ever more entangled bringing each to the brink of despair and passion…and a destiny they can no longer avoid.
Heart Search is the tenth book in Owens’ series. This is my first time reading her work. Let me just start by saying I L-O-V-E the world she’s created! This world is the perfect blend of fiction and reality for me. Just enough sci-fi tossed in to make it interesting, too. The mythology behind this novel was well-researched, and the combination of Wiccan and Druidism as well as some of the Celtic myth definitely kept my interest, as I constantly find myself drawn to stories of this type.
The hero, Laev, is an extraordinary hero. At the onset of the story, he’s a ruler that has not stepped up to his role. By the end of the novel, however, Laev is THE man! He rights wrongs, and seeks solutions to problems. Most importantly, he finds the love of his life – his HeartMate – in Camellia.
Camellia, a heroine as strong as they come, provides the story with a strong dose of reality. We all have skeletons in our closet, and poor Camellia has to deal with hers quite often. She loves passionately, works hard, and is self-sufficient. While she doesn’t really have room nor time in her life for a man, she finds the compelling draw to Laev immutable.
Not only were the love scenes incredible (even when they were on the mental plane), but the rest of the action in the book was stellar as well. Owens kept the novel moving by using problems and solutions throughout her story to move the reader through Camellia’s life and got us to the point where she was ready to share not only her successes but her struggles with someone else – her HeartMate. Funny thing, Camellia, for having known Laev was her HeartMate for quite a bit of time, was very hesitant to allow him into her life in any capacity. The independent woman found flaw with any logic that brought Laev into her life in a significant role. Ya might call Camellia a little stubborn, but that’s OK. Eventually, she realized that certain things in life were meant to be shared, and who better to share them with than the one that was meant to be with you for eternity!
Owens is a great writer! While I did have some problems settling into the story, I couldn’t put it down once the characters drew me in to their world. This grammarian, additionally, enjoyed the author’s writing style, and wasn’t caught up by poor writing. No banishment to the Grammar Dungeon for Ms. Owens! I’m definitely adding the first nine Celta novels to my TBR list, and hope that I can, sooner than later, loose myself in the semi-Druidian world created.