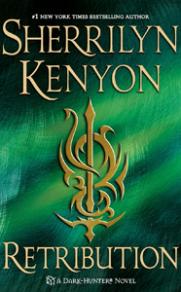 Retribution
Author: Sherrilyn Kenyon
Release Date: August 2, 2011
Publisher: St. Martin’s Press
Dark/Dream Hunters #20
ISBN: #978-0312546595
Genre: Paranormal Romance
Format(s): Hardcover (432 pgs), e-book
Book Source: Library
Harm no human…
A hired gunslinger, William Jessup Brady lived his life with one foot in the grave. He believed that every life had a price. Until the day when he finally found a reason to live. In one single act of brutal betrayal, he lost everything, including his life. Brought back by a Greek goddess to be one of her Dark-Hunters, he gave his immortal soul for vengeance and swore he’d spend eternity protecting the humans he’d once considered prey.
Orphaned as a toddler, Abigail Yager was taken in by a family of vampires and raised on one belief- Dark-Hunters are the evil who prey on both their people and mankind, and they must all be destroyed. While protecting her adoptive race, she has spent her life eliminating the Dark-Hunters…
This is going to be a hard review to write. I’ve put it off as long as possible, so here I go…
According to Goodreads, this is the 20th Dark Hunter book, and if you include the novellas, it’s even higher than that.  I’ve read them all.  The Dark Hunters Series has been one of my favorites over the past several years.  But…  I have to say that I feel the series is losing steam and heading downhill.  What started as an amazing series mythology and intricately spun world, has turned into a confusing stream of words and names. I was a bit mortified that Ms. Kenyon added yet ANOTHER pantheon and set of rules into her series. This series already has the single most complex set of rules of any I read, WHY add more to it?! And it seems that she has dropped several key characters and open-ended subplots for a couple books now.  As a long-time series reader, I was very frustrated with these points.
However, if you take this book completely out of the series and look at Retribution on its own, the book is an enjoyable read.  The Native American mythology was very interesting.  I was a bit overwhelmed trying to understand how all the players fit in, but in the end, it didn’t deter me from enjoying the story.
Jess was a wonderful character. I enjoyed his dark side and strength.  He was a complete cowboy gentleman, full of humor and so laid-back.  I wanted him all to myself! Misguided Abigail took a little while to grow on me – I mean she started out as Jess’s enemy!  The build-up of their relationship was mostly non-existent, and with only one sex scene in this book, you may feel like you got gypped in the romance department. However, they do fall in love as their growing adoration actually plays out in “flashbacks and memories” from past lives.  It mostly works, but I found myself sometimes wishing for more (and slightly confused).
So, in the end, I do recommend this book to both new comers and Dark Hunter regulars.  Because the mythology is a new one, it’s not a bad place to start; however, you are missing out on some AMAZING stories if you don’t go back and read the earlier books.