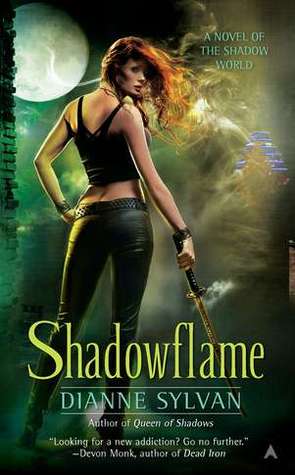 Author: Dianne Sylvan
Release Date: July 26, 2011
Publisher: Ace
Novel of the Shadow World #2
ISBN:978-0441020652
Genre: Urban Fantasy
Format(s): Paperback (360 pgs), e-book
Book Source: Publisher
It’s been three months since musician Miranda Grey became a vampire and married David Solomon, Prime of the South. As Queen, Miranda must quickly come to terms with her new role and learn how to negotiate the treacherous waters of Signet politics, inevitably making dangerous enemies along the way.
As if complicated vampire politics and a rising music career weren’t enough, an enigmatic but powerful force from David’s past appears, leaving a wake of chaos and uncertainty for the Pair’s fledgling relationship. Miranda begins to realize how little she really knows about her husband. But when an assassin begins targeting her friends and allies, the Pair must track down the killer, even as their lives hang in the balance…
Shadowflame is the second novel in the exciting new Shadow World series.  It begins three months after the resolution of the first book Queen of the Shadows.  Due to the nature of the story and character development, and since there is only one book prior to this one, we recommend you read this series from the beginning.  Trust us, it is worth it.
The Shadow World is a world that exists within our own.  This is where vampires (and possibly … other things) exist.  Shadowflame is a gripping read as Miranda, the newly turned vampire and new Queen of the Southern Territory, tries to find her place and role within this world while still trying to hold on to some human ties.  There is a strong, grounded feel to this series, which allows the reader to truly lose herself in the storytelling.  The suspense of the action/mystery is expertly woven with the drama of the relationships.  It was very difficult for us to put it down.  The duality of the worlds and the interactions between them are fascinating and add to the richness of the story.
Some of the drama between Miranda and her Prime, David, is surprising.  We found it somewhat interesting, knowing how much “older” David is than Miranda, that they don’t spend more time getting to know each other and asking those “early relationship building” questions.  We understand that there are some secrets that people feel they must keep, but in some ways it felt as if they don’t talk about themselves or their pasts to each other.
However we should warn you…the author has absolutely no problem with killing characters.  We were amazed at the body count of characters and we are only two books into the series.  It has added to the grounded reality of the series but if it continues we fear it may make us leery of becoming attached to the minor characters within the series.   It makes it difficult to become enraptured when, as a reader, you avoid connecting with a character because you fear their demise is coming.  Their deaths, however, were essential for the overall story arc, which is why we feel we can’t see it as a negative issue.
Gikany and Una look forward to the next book in this intriguing new series and hope some of the characters that we have come to really enjoy do not meet an untimely end anytime soon.  However, some of the foreshadowing in this book has us quite anxious for the next Novel of the Shadow World.