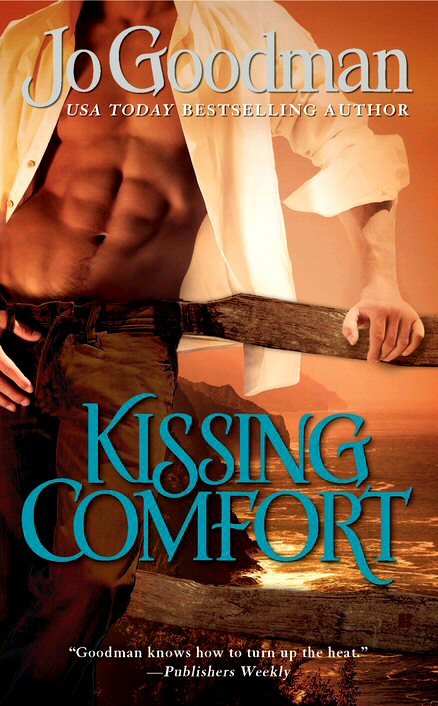 Kissing Comfort
Author: Jo Goodman
Release Date: September 6, 2011
Publisher: Berkley Sensation
ISBN: #978-0425243909
Genre: Historical Romance
Format(s): Paperback (400 pgs), e-book
Book Source: Publisher
Bode DeLong knows that his playboy brother Bram isn’t really in love with Miss Comfort Kennedy, even though it’s clear that she’s enamored with him. With Bram’s motives for the engagement suspect, Bode figures the safest place for Comfort to be is in his arms. Now, Bode just needs to convince Comfort that the childhood fancy she has for his brother is no match for the incredible desire that sparks between them every time they touch.
I must say that Kissing Comfort started out as a book I thought I’d probably not finish.  I’m not really a fan of historical romance, but when Twimom gave me a chance to read one (it’s been awhile) I thought, ‘hey, why not!’.  Let’s just say, I need to be in the right frame of mind to read historical romance – otherwise dialect and grammar issues get in the way for me.
Brief synopsis:  Two Texas Rangers find a small child orphaned at the sight of a slaughter on the road to California in the early days of the West.  She was raised by them, and they ended up making a good life for the threesome.  The child was raised as the niece to the two TX Rangers, and no one was the wiser.  As time marched on, the girl, Comfort, grew into an intelligent woman.  From the time of her coming-out party, she seemed to be chums with Bram.  Bram surprised Comfort early on in the book with the announcement of their engagement at a birthday party for his brother, who was detained for some yet-to-be-revealed (until the end of the book) reason.  Comfort learns a lot about herself, her origins, and the way she wants a man to treat her over the course of the book, which can’t be more than several weeks.
Goodman really did a great job with her research and bringing the west during the time of the gold rush to life.  I felt as though I were wearing petticoats and the fancy-schmantzy hats.  The one thing that did annoy me throughout the book was her choice of character names.  The two brothers, both competing for Comfort Kennedy’s affections, were named Bode and Bram.  While that might not be close for some people, it was too close for me, and I did find myself re-reading sections to make sure that I was thinking the right character.
Grammarians beware:  this book needs one more good editing!  Several errors – not dialectical – caused me to put the book down and come back to it.  However, these things frustrate me beyond measure and probably won’t bother the non-obsessed to the same degree.  Some of the plot was a bit weak for my liking, and could have been made stronger by using other literary devices… but that would have made for a longer book, which I wouldn’t have minded.  I’d be interested to watch how the author develops over the next several years, periodically picking up a novel.

One response to “Review: Kissing Comfort”