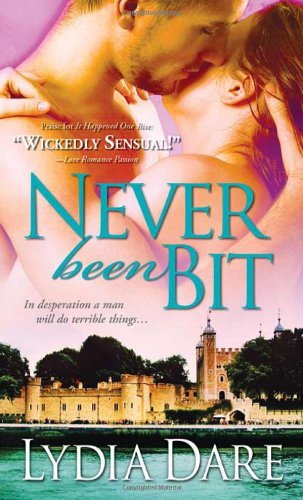 Never Been Bit
Author: Lydia Dare
Release Date: September 1, 2011
Publisher: Sourcebooks
Regency Vampyre #3
ISBN: #978-1402245138
Genre: Paranormal Romance
Format(s): Paperback (384 pgs), e-book
Book Source: Publisher
The glittering world of high society is the playground for the rich, titled, and reluctantly undead…
Alec MacQuarrie’s after-life has become an endless search for pleasure in an effort to overcome his heartbreak and despair. Wandering through the seedy world of London’s demimonde, he’s changed into a dark and fearsome creature even he doesn’t recognize until he stumbles into a magical lass he knew once upon a time and sees a glimpse of the life he could have had.
But the ton is no match for one incorrigible young lady…
After watching each of her coven sisters happily marry, Sorcha Ferguson is determined to capture a Lycan husband of her very own. When she encounters Alec, she decides to save her old friend from what he’s become, all while searching for her own happily-ever-after.
Over his dead body is Alec going to allow this enchanting innocent to throw herself away on an unworthy werewolf, but that leaves him responsible for her, and he’s the worst monster of them all…
Never Been Bit is the third installment of the Regency Vampyre Series, and the 7th book in Ms. Dare’s paranormal/historical adventures, which started with the Westfield Brother’s series.  For those that have followed the series (or my reviews), Never Been Bit is the conclusion of the stories about the sisterhood of Scottish witches, collectively known as the Coig. Youngest witch, Sorcha, finally finds her HEA (happily ever after) with long-time friend, Alec MacQuarrie.
If you are new to the series, you certainly can read this one as a stand alone, but like with most series, you appreciate the characters more if you’ve read their history. And Alec MacQuarrie is one of those characters that has changed and developed over the course of several books.
I have been looking forward to reading Never Been Bit ever since the dramatic conclusion of It Happened One Bite (review HERE) when Alec was transformed into a vampyre. It was done to save his life; however Alec found little happiness in continuing forward without hope and love in his life. Alec spent years pining for Cait, only to have her marry another (The Taming of the Wolf, HERE), so now he feels he has no chance of ever becoming human again like others of his kind. (A vampyre that finds true love will become human.) His character transformed from a overly-concerned friend to a heart-broken playboy, bent on ruining his own existence, yet not wanting to completely die. I was actually a bit shocked at how low Alec had gone – using whores and earning a reputation among the women who enjoy spending “quality time” with vampyres.
Sorcha, on the other hand, is a sweet and innocent young thing. She has spirit and determination and causes those around her to smile and enjoy life a bit more. She has supported each of her friends as they found true love and she’s determined to find a love of her own. However, along the way, she makes it her mission to save Alec from himself. As the two spend time together, Sorcha realizes that Alec is a lot more special than just an old friend. Sorcha’s purity gives her a refreshing outlook in even the darkest of situations.
As someone who has read the series, I have to say I was a bit put off by how badly Alec had changed. The introduction of Delia, Browning and Tillie (associates from the “gentlemen’s club”) seemed almost contrived to create conflict for Alec and Sorcha. However, I was able to look past it, even when Delia was found in Alec’s bed.
I was also frustrated with Alec’s continued disbelief that he would never find love. The author did a good job of building his case, but maybe it’s just the hopeless romantic in me – I felt that once he realized he didn’t love Cait, that he would have hope for himself.
Overall, the story was entertaining and a fitting conclusion for the series. And I am hopeful for more stories based on the ending of Never Been Bit (which was adorable and I enjoyed it!) When I met her at AAD in Philadelphia, I asked Ms. Tammy Falkner (one half of the Lydia Dare writing team) about future books for Radbourne and his brothers, and she smiled.  That made me smile. Ms. Dare’s mix of regency and paranormal is one I’m not ready to give up.

7 responses to “Review: Never Been Bit”