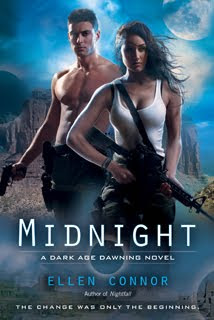 September 6, 2011
REVIEW HERE
God, what had she said?
“Cristián.”
Release hit him like a sledgehammer to the back of the head.  With a hard grunt, he shot against the wall.  He used his free hand, fisted tight, to bang the slippery stucco.  Pleasure washed over his skin.
Chris came back to the world with the sudden feeling of being watched.  Shit. With as much confidence as he could muster, he turned.
Rosa was leaning against the opposite wall.  A small bundle of bath supplies waited at her feet.  She wasn’t standing in the doorway as if she’d just walked in.  No, she had settled in.  To watch him.
“All done?”
“Yeah,” he gritted out.
He was still stark naked, holding his flaccid cock.  Shit.  Shit.  Shit.  He grabbed his washcloth off a nearby hook and wiped his hands, then ran a little water to rinse the wall.  As calmly as he could manage, he found his towel and began to dry off.
Rosa didn’t budge.  She followed his every movement with a dark, unreadable gaze.  “Don’t do that again unless you want a hard-up bravo to help you out.  There are one or two.”
“Lay off, all right?”
She looked perfectly relaxed, her hands tucked behind her back.  That pose thrust her breasts against a white button-down, one long enough to just cover her ass.  Did she use it as a nightgown?  It looked rumpled as if she’d slept in it.  Beneath the clinging cotton her nipples were rock hard.
In the dream he’d been arrogant.  He’d known what it was to be wanted.  Maybe that was because she’d looked at him the way she was doing just then.  Stark appreciation shone from her luminous brown eyes.  He could knock down trees with his bare hands when she ate him up with her stare.
Chris wrapped the towel loosely around his waist and eased nearer.  Any minute she’d pull a gun on him, but he didn’t care.  She was the inspiration behind two of the most satisfying orgasms he’d had in years.  And he felt like paying homage to his muse.
“Thank you,” he said.
“For what?”
“Letting me finish.”
She licked her lower lip and smiled.  “I won’t lie, Cristián.  I enjoyed the show.”
PURCHASE INFO:

One response to “Sunday Snippet #77”