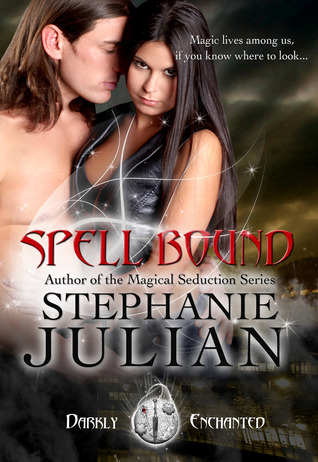 Author: Stephanie Julian
Release Date: September 22, 2011
Publisher: Moonlit Night Publishing
Darkly Enchanted #1
Genre: Paranormal Romance
Format(s): e-book
Book Source: Author
She’s running from fate…
Shea Tedaldi is the only thing standing between her six-year-old brother and the men who killed their parents. Descendants of the ancient Etruscan magical race, Shea and her brother keep powerful secrets that make them the targets of the evil Malandante. They’ve been looking for a safe haven but the bad guys are gaining on them and Shea needs a hero, a guardian who won’t falter in the face of danger…
He’s looking for the key to break the spell…
Gabriel Borelli is a warrior born to protect the Etruscan witches living under a curse. He’s dedicated to breaking the spell and avenging the murder of his father by the Malandante. He won’t let anything—or anyone—get in his way. Not even the one woman who may hold the key to his quest…and his heart.
Working in a strip club wasn’t the kind of dancing Shea Tedaldi thought she’d be doing to pay the bills, but she made enough money to take care of her little brother, Leo, and that’s all that matters. But when the men chasing them get too close, she’s forced to reach out to one of the fabled grigorio for help. Whether she’d end up kissing or kicking the arrogant warrior is the real question.

Gabriel Borelli doesn’t need the frustration of a young woman and the small child with her showing up on his doorstep asking for help. Sure, as a grigorio, he’s bound to assist them, but he’s got a mission of his own to deal with: killing the man who murdered his father and brother. A man who has also been hunting down and killing the members of a group of cursed witches for 500 years.

I was very pleased to find that Julian’s latest novel centers on the streghe, or witches, of her Etruscan community. Typically, holding a peripheral role to the shifters, these amazing women are seers and healers, as well as possessing other “Goddess Gifts” which they use to help those in need. Shea is born to an especially secretive group of streghe, and the more she learns about her family’s history, the more she realizes her own time is running out.
Gabriel is one of my favorite alpha males to date. His arrogance is initially quite palpable, but fades quickly as his duty to Shae and her brother take precedence. As he becomes dangerously attached to the pair, he learns a valuable lesson about the things that really matter, and what’s worth dying for.
In addition to plenty of well-crafted suspense, the characters’ romantic progression was by turns growl-worthy and sweet, which suited them both perfectly. The cameo by Tivr, the moon god, was a happy surprise as well, his insight and use of humor a welcome break to the rising turmoil Shae finds herself in. The ending, too, I enjoyed very much, even though it wasn’t at all what I expected.
I’m so pleased to have had the opportunity to read and review Spell Bound, the first in the Darkly Enchanted series, by Stephanie Julian. Her tales of the Etruscans and their deities have become more enjoyable with each addition to the Lucani Lovers series, and Spell Bound, while broadening the hidden society of witches, shifters, and fairies, is easily as delightful, if not more so.

Books in the Series

GIVEAWAY:
Stephanie is graciously giving away one (1) electronic copy of her newest release Spell Bound. Please leave your comments for Stephanie at the end of today’s review or on YESTERDAY’S AUTHOR SPOTLIGHT. Comments must be received by Saturday October 22, 2011, at 9:00 PM EDT to be eligible for the contest. One entry per person, winner will be selected from eligible entries using random.org. Contest is open internationally; please leave your email address so we can send you the book. Thank you to Steph for this fun giveaway!