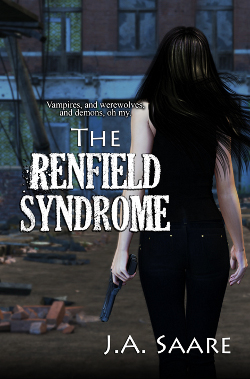 The Renfield Syndrome
Author: J.A. Saare
Release Date: August 23, 2011
Publisher: Mundania Press
Rhiannon’s Laws #2
ISBN: #978-1606592663
Genre: Urban Fantasy
Format(s): Paperback (212 pgs), e-book
Book Source: KLB Virtual Events
Rhiannon thought facing off against a deranged child vampire was the most dangerous task she would ever have to undertake, but she’s about to discover making a deal with a demon is far, far worse. Sent forward into another reality, one in which vampires are now dominating nearly extinct humans, she realizes the sooner she returns to her vampire lover, Disco, the better. 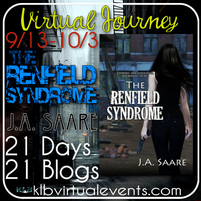 Unfortunately, time changes a lot of things; including those most trusted around her. When she’s faced with a loss and betrayal unlike any she has ever known, her focus shifts from severing the debt between the demon that wants to kill her, to exacting a revenge that will bring forth consequences she never could have fathomed. By reaching out to the darkness lingering within her, she’ll find the strength to push forward despite the circumstances that would see her dead and buried.
After all, when it’s all said and done, all that she has left to lose is her soul.
After I finished reading the first book in the Rhiannon’s Law series, Dead, Undead, or Somewhere in Between (review HERE), I couldn’t wait to get my hands on The Renfield Syndrome. Book 1 ended with a MAJOR cliff-hanger, taking our heroine, Rhiannon over 100 years into the future where a disease has wiped out much of the human population and vampires live out in the open.  Renfield picks up immediately after the conclusion of Dead. Due to the drastic changes between book 1 and 2, you can read Renfield as a stand-alone story, but I suggest starting with the first book to give you more background about the main characters.
The story begins with Rhiannon trying to get her bearings after learning she has been thrust into the future as the result of making a deal with an evil demon. She is quickly captured by a group claiming to protect her from the vampires. Their leader, Carter, takes an immediate liking to Rhiannon and tries to convince her why she can’t be around the vampires.
Carter’s compound seems more like a cult hideout. Everyone wears the same military uniform and there are strict rules governing their lives. Rhiannon tries to learn as much as possible without telling anyone the real truth. Although at times it felt like I was being told rather than experiencing this history, it allows the author to clue the reader in on the changes that have transpired over the past 100 years.
Rhiannon realizes that she needs to seek out contacts from her past so that she can attempt to return home and set the future on a different path. She is able to convince Carter to take her into the city where the vampires live, and once there, she breaks from his group to stay with her former friends. It is with them that she learns the full extent of how awful the future is. With only a few days left until the demon comes to claim her, Rhiannon decides to take matters into her own hands, even if it means betraying those that she loves.
This book is full of awesomeness. First, the story is just incredibly exciting and absorbing, managing to take me to the edge and back with twists and turns. Time travel and alternate universe themed stories can be tricky, but Ms. Saare created something that drew me in without a lot of hoops to jump. She attempts to address some of the impacts of time travel via Paine’s “no changing the future” dialogues, but it never weighs down the flow of the story.
Second, there is true emotion in this book. Rhiannon learns that her one true love, vampire Gabriel (Disco), died shortly after she disappeared in the past. The reunion scenes with her friends in the future and Disco later on, pulled at my heart strings and left an ache in my belly. The true depth of this story, however, is watching Rhiannon interact with Paine, a man she cares about but does not love. At first I was very worried where Ms. Saari was taking the story, but she did an amazing job dealing with guilt, love, and loneliness.
Ms. Saare created several new and interesting characters for this second story. I hope we see more of Carter, Jennifer (both present and future) and Bells. I enjoyed the first section with Carter and was a bit sad to see him practically disappear from the second half of the book. I liked how he appeared the savior, then the bad guy, and in the end, we just don’t know.
The conclusion of the story was a bit easier to take for folks like me who cannot do cliffhangers. I was a little put off by the reintroduction of characters from the very beginning of the first book, but I trust in the author and her ability to weave an exciting tale.  Things were most certainly left open-ended, and I am a bit afraid yet full of anticipation of where Ms. Saare will take Rhiannon next.

2 responses to “Review: The Renfield Syndrome”