Hello Readers! Today I have two special guests, Gayle Donnelly and Robyn Mackenzie. Both authors both hail from the Midwest. Writing partners as well as friends (perhaps even sisters in another life), both are married and each has two wonderful children. The similarities don’t stop there. Both earned degrees in English education, both have a profound weakness for Starbucks coffee, and both are completely captivated by the ethereal beauty found in the Pacific Northwest. Their individual passions for writing and storytelling, led them to create Infinite Betrayal, the first book in their Infinity Series.  (Please see Vampbard’s review of Infinite Betrayal HERE.) And KEEP READING for your chance to win a copy of Infinite Betrayal… Details for GIVEAWAY are below.
Gayle and Robyn are both featured authors attending Author’s After Dark in New Orleans. For more information about AAD2012, click HERE.
Please help me welcome Gayle and Robyn to That’s What I’m Talking About.

1) Can you each tell us a little something special about the other one? 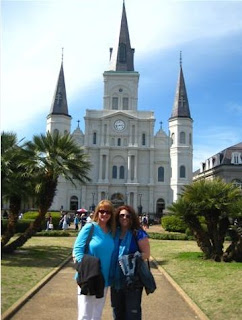 Robyn: Probably one of the most special things about Gayle is she balances me and forces me out of my comfort zone when needed. She’s much more of an extrovert than I am and I’ve grown so much in that area because of her. She’s also the type of friend you can call at 2:00 in the morning and she’ll be at your house in 10 minutes, no questions asked.
Gayle:  There are several things I can think of but I think the most important is that she  – no matter what the situation – will always fill where I am lacking.  If I am depressed or stressed about something, she always ends up being my touchstone to bring me back to reality.  When I need something, she provides – no matter what.
2) Book one is Infinite Betrayal. Tell us a little about Mathias and Mina’s story.
Gayle/Robyn:  Infinite Betrayal starts out with the death of Mina Roarke’s mother and the mystery surrounding the background of an absentee father.  She travels to Germany to try and get answers when she comes in contact with Mathias; who says he has been sent from this mysterious father of hers that she knows nothing about.  She soon finds out that her heritage is not what she ever thought it would be and is quickly thrust into a war between two species that have been in existence for thousands of years.  Mina becomes the target and well, you will have to read the story to get the rest!!
3) Tell us about Mathias & Mina…
Gayle/Robyn:
Mina is a complete smart ass but her best attribute is her loyalty to the people she loves.  She has major trust issues but once someone is in her fold, they stay there.  She has long, auburn hair, is about 5’6, lives outside of Seattle and works as an insurance adjuster.
Mathias is the youngest General of the Coteri.  His parents died when he was young so he was raised by Roderick, King of the Coteri Race.  He worked extremely hard to overcome the stigma of being raised by the king and proved to himself and everyone around him that he earned and deserved the rank of General of the German Coteri forces.
4) Book two is Infinite Surrender.  This is your current work in progress.  Can you tell us a little more about it?
Gayle/Robyn: Infinite Surrender follows the story of Chloe and Talon, who are both introduced in Infinite Betrayal, and continues the storyline progression from the first book. It takes place in the Pacific Northwest but unfortunately, we can’t tell you too much about the story since we don’t want to give away too many secrets from the first book. We can tell you that Talon is all Alpha and he definitely meets his match in Chloe. Infinite Surrender is action-packed and introduces several new interesting secondary characters. And of course, the romance/heat level is hot, hot, hot!

5) I can’t wait to read more! Book three is Infinite Desire.  What can you tell us about this book?
Gayle/Robyn:  Infinite Desire takes place in New Orleans and centers around the General of the South; Devereux.  I don’t want to get too much into the story but I love the outline we have come up with.
6)  What made both of you want to attend the 2012 Authors After Dark Conference?
Well, we had planned on going to the last conference because Larissa Ione was the Mistress of Ceremonies (and we both completely worship her and her books!)  Unfortunately, my (Gayle’s) daughter got sick and we ended up not attending.  But for 2012, the minute we heard it was going to be in New Orleans, we KNEW we had to go!  There are so many of our favorite authors attending this session that just being there is going to be a treat!
But to add a cherry on top, we found out that we were nominated in 5 categories for the AAD Bookie Awards!!  Best Non-Wolf Shifter novel, Best Cover, Best World Building, E-book Only novel of the year, and debut author.  We were stunned to say the least!  Of course, we would love to hear our name called but honestly, just to be back in the Big Easy will be prize enough!  We both cannot wait to go to Pat O’s and grab a hurricane to-go and walk down to the French Market and shop!  Of course, we’ll melt along the way with the conference being in August but hey, what’s the South without a little heat!!
Then to top it all off, we recently found out that Infinite Betrayal has also been nominated by Romantic Times for Best Indie Paranormal/Fantasy/Futuristic book for 2011!
Needless to say, it has been a whirlwind of a year for us and we can only hope that 2012 will bring more fantastic stories and allow us to continue to live our dream!
Well first, I’d like to say CONGRATULATIONS on all of your nominations! What an honor for you both!  Second, I have never been to New Orleans and cannot wait to get there – I hope to enjoy a hurricane to go with you both!
ABOUT Infinite Betrayal:
He would protect her with his life…
Mathias has been ordered to protect Mina Roarke at all costs while keeping her Father’s secrets concealed.  But from the moment he sees her, the hunger he’s desperately tried to bury, roars to life.  The beast within is awakened and wants only one thing…Mina. 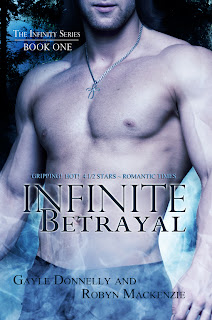 But when his enemies target her life, Mina and Mathias become caught in a lethal game of revenge.   To save her, Mathias must not only expose the truth…but also what lies deep within him.
She was just looking for answers…
Mina had always been told she was special. In what way, she never fully understood until her life and everything she thought she knew and believed in was turned completely upside down.
After the unexpected death of her mother, Mina finds clues about her past that trigger more questions than answers. Her quest to find those answers thrusts Mina deep into the Black Forest of Germany and into the arms of a man who tests her control…in more ways than one.  She is wrenched from her own reality into a world filled with adrenaline-charged danger, blazing sexual heat, and the answers that have been hidden her entire life.
Mina alone holds the power to change her future but when she comes face to face with ultimate betrayal, can she still trust in the one man that has captured her heart?
Thank you Gayle and Robyn for stopping by That’s What I’m Talking About.  Gayle and Robyn are graciously giving away one (1) electronic copy of Infinite Betrayal. Please leave your comments for the authors by Tuesday November 22, 2011, at 9:00 PM EST to be eligible for the contest. One entry per person, winner will be selected from eligible entries using random.org. Contest is open internationally; please leave your email address so the authors can send you the book. Thank you to Gayle and Robyn for this fun giveaway!