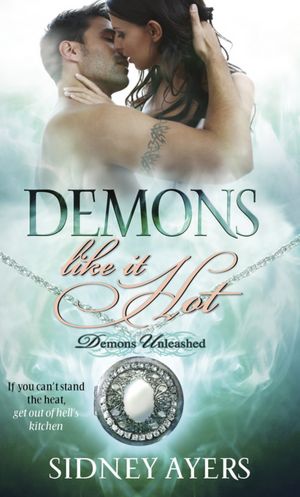 Demons Like It Hot
Author: Sidney Ayers
Release Date: Dec. 6, 2011
Publisher: Sourcebooks Casablanca
Demons Unleashed #2
ISBN: #978-1402251771
Genre: Paranormal Romance
Format(s): Paperback (448 pgs), e-book
Book Source: Publisher
A RECIPE FOR DISASTER…
Matthias Ambrose is a demon mercenary who never took sides, until his attraction to the spunky caterer he was hired to kidnap leads him to almost botch a job for the first time in eight hundred years. Now he must protect her from his former clients, but even an ice-cold demon like Matthias struggles to resist her fiery charms.
OR THE PERFECT RECIPE FOR PASSION…
Completely engrossed with planning menus and prepping recipes for her shot at cooking show fame, star caterer Serah SanGermano refuses to believe she’s on a fast track to Hades.
But how’s she supposed to stick to the kitchen if she can’t stand the heat of her gorgeous demonic bodyguard?
As a diabolical plot to destroy humanity unfolds and all hell breaks loose in Serah’s kitchen, she and Matthias find themselves knee-deep in demons and up to their eyeballs in love…
What self-respecting chef with a demon problem wouldn’t jump at the chance to be on a popular televised cooking show if it meant saving her catering business from financial ruin? Serah SanGermano has gotten used to the idea of demons (both good and bad), imps, the existence of succubae, and angels, and she’s fine with it, really, if only they’d stop trying to sabotage her catering jobs and blow up her kitchen.
Some mistakes can never be undone, and while Matthias Ambrose has learned that lesson well over the long centuries of his existence, his latest mistake could mean the end of the world. Literally. Once a target he was paid by the Infernati to kidnap, Serah has now become his mission, and keeping her safe is his one chance to save all of humanity.
Serah was the heroine’s best friend in Demons Prefer Blondes (review HERE), the first novel in the Demons Unleashed series, and I was glad to see her get her own book this time around. As the more reserved of the pair, she is reluctant to accept her destiny, but proves that she is truly heroic at heart. The entire novel is filled with a quirky, fun mix of contradictions. Serah doesn’t have faith in herself, but has no doubts as to her friend (and Paladin) Kalli’s ability to return her demonically trashed kitchen to sparkling cleanliness within moments.
Matthias is an alpha male in need of redemption. Rather than coming across as a tired device, however, Ayers seems to gleefully heap all manner of discomforts on our hero, giving his role in the story an unexpectedly sweet turn, and making it easier than it otherwise might have been to hope for his eternal happiness alongside Serah’s.
Serah and Matthias are convinced they are completely wrong for each other, but they are destined to be together anyway. This sort of planned HEA could have played out too predictably, thereby robbing the story of some of it’s hottest and best moments, but Ayers makes it a lot of fun to watch their collision into each other. The tension between the two is both charming and sexy, and is perhaps even more erotic than when they are giving into temptation.
One of my favorite things about Demons Like It Hot is that Ayers gives her heroine a healthy sense of humor and plenty enough snark to drive her man insane. Matthias has a slightly easier time of it than Rafe, from the first book in this series, but he’s still left grinding his teeth a good bit, which I found fairly delightful. It would be difficult to explain why, exactly, that is so much fun, so it’s much better to just read along and enjoy.