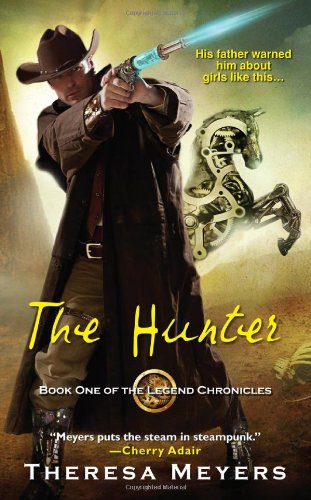 The Hunter
Author: Theresa Meyers
Release Date: Nov. 1, 2011
Publisher: Zebra
Legend Chronicles #1
ISBN: #978-1420121247
Genre: Paranormal Romance, Steampunk Western
Format(s): Paperback (352 pgs), e-book
Book Source: Author-I won an ARC as a prize at AAD Philly
Colt Jackson has gotten his name on many a wanted poster with success in the family business: hunting supernaturals across the frontier. Lately, though, there’s a sulfur stink in the wind and the Darkin population is exploding. A rift in the worlds is appearing. To close it, Colt will have to do the unthinkable and work with a demon to pass arcane boundaries no human alone can cross.
Except when he summons his demon, he doesn’t get some horned monstrosity: he gets a curvy redheaded succubus named Lilly, who’s willing to make a bargain to become human again. He also gets Lilly’s secret expertise on the machinations on the dark side of the rift. And her charm and cleverness help to get them out of what his silver-loaded pistol and mechanical horse can’t. Of course, when all hell breaks loose, he might have to sacrifice his soul. But what’s adventure without a little risk?
The Hunter is classified as a paranormal romance, steampunk western. With that said, let me translate: The story’s setting is a western – taking place during the late 1800’s on the planes of the wild west. The paranormal factor is strong and is the heart of the storyline. The steampunk attributes are more related to the props than the setting and way of life. Think Will Smith’s Wild Wild West with demons.

The story focuses on the youngest of the three Jackson brothers all raised to be Hunters – men and women that hunt down and kill the Darkin which torment the human world. Colt was told by his father long ago that someday the boys must collect and unite the three pieces of the mythical Book of Legend to prevent the coming of the creatures from Hell to end of the world. In his solitary journeys, Colt discovers a piece of the Book is hidden behind a door that only a demon can access.
Enter Miss Lilly. A human-turned-succubus after making a deal with the evil demon lord, Rathe, to protect her sister, she makes a bargain with Colt to help him open the door. Although a Darkin, Lilly comes across more human than demon, and it makes me wonder how she survived the past 25 years as a succubus. At times I felt she was a bit too prim and proper to be a believable succubus.  Also, I felt the use of her demon powers was not consistent throughout the book – sometimes flashing in an item to help them and at other times sitting back remaining “helpless.”
Together Colt and Lilly take on the challenge of finding the first section of the book. Both are instantly attracted to one another, but are cautious given their respective backgrounds and situations. Colt constantly questions if his growing need for Lilly is because of her demon powers, and Lilly doesn’t trust because of her father’s grifter ways.
At first I found their budding romance sweet. I adored that she refused to use her succubus powers, hoping to find out if Colt was really falling for her. I admired their baby steps forward and loved when they would give into a passionate kiss.  However, after about three-quarters of reading this back and forth play, I grew a bit weary of the constant inner-monologue each had questioning his/her own feelings and the other’s motives.  I felt that there was too much contemplation and not enough action.
The overall plot of reuniting the pieces of the Book is interesting and I like the mythology Ms. Meyers has fleshed out in The Hunter. The conclusion was adequate, but I was not completely satisfied with the actions Colt took to fulfill his promises to Lilly. Knowing that there are still two books in the series, I am okay that the details of her world aren’t rock solid or completely laid out in this first book – it leaves room to grow. However, I am a little disappointed that the steampunk factor wasn’t a bigger part of the story. Maybe it’s the engineer in me, but I wanted a larger integration of the devices and instruments – for the world to be reliant on the steampunk way of life.
All-in-all a good read and definitely worth picking up if you enjoy westerns and paranormal romances. I look forward to finding out where the story is headed and how the Jackson brothers will save the world. The next book, The Slayer, is due to release next April, and I will be looking for it in the stores.

Theresa is one of the featured authors attending Author’s After Dark in New Orleans. For more information about AAD2012, click HERE.

Raised by a bibliophile who made the dining room into a library, Theresa has always been a lover of books and stories. First a writer for newspapers, then for national magazines, she started her first novel in high school, eventually enrolling in a Writer’s Digest course and putting the book under the bed until she joined Romance Writers of America in 1993. In 2005 she was selected as one of eleven finalists for the American Title II contest, the American Idol of books. She is married to the first man she ever went on a real date with (to their high school prom), who she knew was hero material when he suffered through having to let her parents drive, and her brother sit between them in the backseat of the car. They currently live in a Victorian house on a mini farm in the Pacific Northwest with their two children, three cats, an old chestnut Arabian gelding, an energetic mini-Aussie shepherd puppy, several rabbits, a dozen chickens and an out-of-control herb garden. You can find her online on Twitter, Facebook, at her Web site or blogging with the other Lolitas of STEAMED!.

5 responses to “Review: The Hunter”