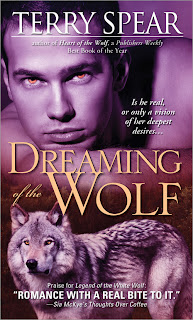 Dreaming Of The Wolf
Author: Terry Spear
Release Date: Dec. 1, 2011
Publisher: Sourcebooks Casablanca
Werewolf Series Book 8
ISBN: #978-1402245558
Genre: Paranormal Romance
Format(s): Paperback (384 pgs), e-book
Book Source: Publisher
About the book:
A fierce hunter…
Alicia Greiston is a no-nonsense bounty hunter determined to bring a ring of mobsters to justice. Her dogged pursuit of the crime family has forced her to avoid relationships—any man would only become a target for retribution. Luckily, Jake Silver is more than a man, and his instincts are telling him to stop at nothing to protect her.
An animal passion…
However, the mob isn’t entirely human either, and soon Alicia must flee for her life. When Alicia and Jake’s passion begins to spill over into their dreams, Jake learns he will have to do more than defend her—he’ll have to show his mate the way of the wolf.
What B is talking about:
Driven by the recent loss of her mother, Alicia Greiston is determined to bring the men responsible for her murder to justice. No sacrifice is too high a price to see them behind bars, even if the cost is her own life. Unprepared to meet a man she was certain could never exist in her wildest dreams, the intervention by the sexy stranger turns her world inside out.
Jake Silver thinks his quick fascination with the pretty woman he spies outside an upscale restaurant is purely sexual. He’s a werewolf, after all, and the human he’s determined to get to know a little better could be just what he needs—at least for the night. But, when he’s compelled to do anything to keep her safe, even if it means defying his own pack, he realizes she’s much more than what she seems.
Alicia and Jake are a great match for each other from the beginning, and due to both her resignation to her fate, and the urgings of his wolf, they fall into one another early on in Dreaming of the Wolf. Jake is one of the more perfect males I’ve pleasure of reading yet, having a keen enough intelligence to balance his alpha-male impulsiveness, as well as keeping his affections sweet and comfortably easy throughout. The mutual need he and Alicia share is tender, yet incredibly sexy as well.
Spear takes her time letting us get to know Alicia and Jake in the beginning of the story, but once Alicia is turned, Dreaming of the Wolf really starts to take off. The random pieces and connections begin falling into place with increasing speed, and ratcheting up the tension for the remainder of the novel.
Dreaming of the Wolf proves, yet again, that Spear is very capable of weaving the many elements of a paranormal romance series into her tales, while ensuring each novel is strong enough to stand successfully on its own. Spear’s wolves are welcoming, devoted, clever, and loving. The chemistry between Alicia and Jake shines from the beginning, and doesn’t fade as their story progresses. Though a happy ending is a guarantee, getting there is a happy, sexy adventure that will likely appeal to all fans of werewolves, and the feisty mates that win their hearts.
B’s Rating:

FOR CHANCE TO WIN THIS SEXY BOOK, please see the guest post from author Terry Spear HERE.
Purchase Info
Dreaming of the Wolf

2 responses to “Review: Dreaming of the Wolf”