How To Worship a Goddess 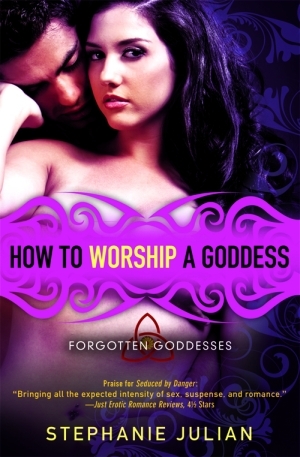 Author: Stephanie Julian
Release Date: Dec. 1, 2011
Publisher: Sourcebooks
Forgotten Goddesses #2
ISBN: #978-1402251504
Genre: Paranormal Romance
Format(s): Paperback (304 pgs), e-book
Book Source: Publisher
HE’S EXACTLY WHAT SHE’S ALWAYS WANTED…
Lucy was once the beloved Goddess of the Moon. These days the goddesses of the Etruscan pantheon are all but forgotten. The only rituals she enjoys now are the local hockey games, where one ferociously handsome player inflames her divine blood…
AND SHE UNLEASHES HIM LIKE A FORCE OF NATURE…
Brandon Stevenson is one hundred percent focused on the game, until he looks up and sees a celestial beauty sitting in the third row. A man could fall hard for a distraction like that…
Lucy is one of the “forgotten goddesses” of the Etruscan pantheon who now lives in the United States. She, like her sister goddesses, has lost most of her powers and keeps a fairly low profile. Unlike other goddesses, Lucy still has a small group of loyal subjects, the Lucani (werewolves), who remain respectful of the old ways.  She passes time running a bar for her followers and attending hockey games.
Brandon plays for the local hockey team and has been keeping an eye on Lucy. One evening, he finally tracks her down and sparks fly from the moment the two lay eyes on each other. The bond is so strong from the first moment, that Brand is able to find her again, even after Lucy erases his memories of their (very, steam hot) first encounter.
I was drawn into Lucy and Brandon’s story right from the start. The “lust/love at first site” trope worked for this story, and I didn’t feel like they rushed into things. I was glad that the characters didn’t find ways to drive apart their bond. The two “share their love” *wink* often – and aggressively, at times. Ms. Julian is an expert author of steamy smex scenes.
How to Worship a Goddess is the second story in Ms. Julian’s Forgotten Goddesses series. However, it is a spin off of sorts from her Lucani Lovers series, and as someone that hasn’t read that series, I kept wondering if I was missing references from other books. It didn’t detract from the story, but it was always in the back of my mind. However, I was a bit disappointed in how little the Involuti and to a lesser degree, underworld god Charun, played in this storyline.  Both were major parts in the first book, What a Goddess Wants, and I still had questions lingering from reading that book this summer.
There were some interesting twists that I would have liked to have  had more details flushed out for me. One involves a Lucani named Catene. This young woman was surrounded in mystery for almost the entire book, and once it was revealed why, I wanted to know more. I wonder if she’ll make another appearance in this series, or if she’ll become the focus in the Lucani Lovers series.  Also, I wanted more interaction with Brand’s parents – I feel like there was no closure on that end.
Overall, I enjoyed How to Worship a Goddess and most certainly will continue reading this series. I have many questions about this little known (to me) pantheon, and I look forward to finding out where Ms. Julian will take her goddesses next.

One response to “Review: How to Worship a Goddess”