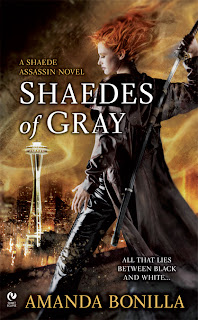 Shaedes of Gray
Author: Amanda Bonilla
Release Date: Dec. 6, 2011
Publisher: Signet Eclipse
Shaede Assassin Series Book 1
ISBN: #978-0451235299
Genre: Urban Fantasy
Format(s): Paperback (336 pgs), e-book
Book Source: Publisher
About the book:
Darian has lived alone for almost a century in the shadows of the night. Made and abandoned by her former love, Darian is the last of her kind—an immortal Shaede who can slip into darkness as easily as breathing. With no one else to rely on, she has taught herself how to survive, using her unique skills to become a deadly assassin.
Darian finds herself struggling to keep her employer, Tyler, at arm’s length, especially since his seductive smile makes her want to break her rules about love. The work he offers is necessary to protect the innocent—and a welcome distraction. But when Darian’s next mark turns out to be Xander Peck, King of the Shaede Nation, her whole worldview is thrown into question. Darian begins to wonder if she’s taken on more than her conscience will allow, but a good assassin never leaves a job unfinished….
What B is talking about:
Darian has spent nearly a century as an eternal Shaede, and most of that time she’s been alone. Born an embarrassingly outspoken daughter in an era when women were only worth the connections they could ensure through their marriage, she’d lived most of her human life alone, at least figuratively, as well. Believing herself to be the last of her kind after the death of her lover and maker, Azriel, she learned to take care of herself, and remade herself into a deadly assassin.
So many things change for Darian from the very beginning. She starts out believing she’s the biggest, baddest thing out there, but that notion is immediately shaken, and once the shattering of the illusion she’s been living under begins, it doesn’t stop. Bonilla doesn’t spare her main character anything, yet Darian proves to be surprising and capable, not only to the other characters in the novel, but to me as a reader as well.
Bonilla uses the first person narrative to near-perfect effect and does an excellent job of opening up Darian’s world to the reader step-by-step through her eyes. Darian proves to be a methodical guide into her new world from her realization, through her acceptance, and finally, to her thorough immersion in it.
One other thing I very much enjoyed about Shaedes of Gray, was that there is real romance awakening throughout the novel. As with most other Urban Fantasy novels I’ve read, it is not the main focus or objective to the narrative, but it is woven into the rest of the story, and is prominent enough to soften the edges of the journey Darian must take to learn the truth of what she is.
There were one or two stumbling blocks I encountered during key moments of conflict, but they weren’t enough to keep me from being riveted by Darian’s story. I have to say I’m especially happy to have been able to read the first novel in this series. Bonilla is a gifted writer, and has gotten the Shaede Assassin Series off to a very promising start. If Shaedes of Gray sets the standard for the rest of the novels to follow, I’ll definitely be on board for the entire ride.
B’s Rating:

7 responses to “Review: Shaedes of Gray”