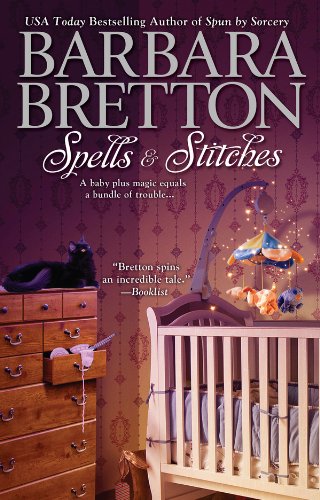 Spells & Stitches
Author: Barbara Bretton
Release Date: Dec. 6, 2011
Publisher: Berkeley Trade
Sugar Maple Chronicles #4
ISBN: 978-0425241059
Genre: Paranormal Romance
Format(s): Paperback (336 pages), e-book
Book Source: Publisher
Sugar Maple, Vermont, knitting store owner Chloe Hobbs couldn’t be happier about her pregnancy. But with the arrival of the town’s newest resident, things are about to get a lot more magical.
Baby Laria is six pounds, eleven ounces of perfect, and Chloe and Luke are over the moon. But when they learn that Laria takes after her mom in the sorcery department, it becomes clear that their baby might have more power than even a pro like Chloe can handle…
Spells and Stitches is the fourth book in the Sugar Maple Chronicles, by best-selling author Barbara Bretton. The book doesn’t read or even really feel like a romance.  It’s not a narration of how two people came together in love.  Rather, it’s the story of what happens after the “happily ever after” of the romance that developed in the first three books of the Sugar Maple Chronicles between Chloe Hobbs, sorceress, and Luke MacKenzie, police chief and only 100% human resident of Sugar Maple.  After a lengthy and tumultuous pregnancy full of some very funny magical mishaps, we finally have the arrival of their daughter Laria—pronounced like “Mariah” but with an “L”—Hobbs MacKenzie.  Her birth is no small event and germinates the overall theme of the book, “family.”
In this set-up for the mysteries to come, there are still romantic elements.  It is definitely romantic to be cared for and anticipated by the man you love.  When baby Laria has cause to be seen at the local human hospital, Chloe is grateful that Luke has provided for medical insurance, something that it never occurred to her she or her daughter would need in their protected, magical community.  While they’re waiting on doctors, Luke thoughtfully brings Chloe her knitting bag with a simple, “I thought you might want this.”  Chloe notes, “At that moment those socks-in-progress were all that stood between me and utter panic.”  The book changes narrating voices between Chloe, Luke, and Luke’s sister Meghan.  Even as a mother myself, I thought it was incredibly romantic not when Chloe reflected on the experience of childbirth, but when Luke did.

The lump in my throat was the size of a hubcap.  The rush of love I felt for Chloe and our daughter almost brought me to my knees….  Now I knew that anything was possible.  Even building a new life from the wreckage of my old one.

You can’t help but utter, “awwwww” under your breath while turning the page.
The family theme raises its hand for attention over and over again.  With the arrival of Laira, comes to two especially significant realizations for Chloe.  First, “I am a mother now.  The baby sleeping against my chest was my daughter.  I would never again draw a breath without worrying how it would affect her, without wondering if she was safe, without praying her life would be blessed with everything wonderful.”  Secondly, Chloe understands in a new and personal way just what it was that Luke lost when his first daughter was killed in an auto accident.  “For the first time I truly understood the depth of his loss and how strong the human spirit really was.”
You can’t have a family theme without including extended family.  While Chloe has lived most of her life with the protection and support of a village full of magical creatures, she has also lived without the stability of her own biological family, killed when she was very young.  She craves and wants very much for her daughter to have that connection so she embraces the pushy MacKenzie clan, nosey mother-in-law and all—despite Luke and Elspeth’s, the surly troll who lives with them, very vocal misgivings.  Having that many humans want to insert themselves into a carefully concealed life of is not without amusement.  The interaction of humans and creatures of fantasy is a great source of conflict for paranormal authors.  For Bretton, it’s also a great fodder for her natural comedic style. I laughed out loud when Chloe makes a joke at a MacKenzie family brunch that falls flat and she complains it was like, “having a ton of bricks fall on my inner wiseass.”  Some of my favorite punchlines included:

*I don’t know who you are, but if you lead me to the Belgian waffles I’ll send your kid to Harvard.

*But it wasn’t the good kind of silent because I could hear her bitching in three other dimensions.

*I definitely loved the knowledge that every day that passed brought me twenty-four hours closer to meeting our daughter.  And let’s be honest, bigger boobs didn’t hurt either.

*Was I overreacting?  Of course I was, but believe me when I say postnatal hormones can kick PMS ass.

*(And my personal favorite) I’d rather be trapped in a wind tunnel with Donald Trump’s hair.

The story of Meghan’s latest doomed romance sets up the main climax at the end. This is where the book fell short for me.  The set-up was obvious and made the ending a little on the predictable side.  I sensed Meghan has more to her than what was written for her.  As Luke’s favorite sister, I expect we’ll see her in future books, and hopefully with a little more depth.
Laria proves to have formidable powers despite being three-quarters human.  At a week old, they are already stronger than her mother’s.  That fact will make parenting her in the years to come especially worth following.
Spells and Stitches can stand on its own, but it is a much richer experience if you have the back story of the first three Sugar Maple Chronicles. Included bonuses of the paperback edition:  Knitting glossary of terms, a complete list of Sugar Maple’s Residents, a recipe for Arroz con gandules, and multiple patterns and commentary from assorted bloggers, writers, and knitters.