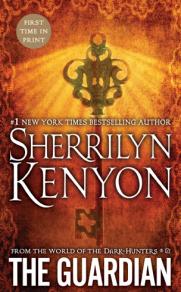 The Guardian
Author: Sherrilyn Kenyon
Release Date: Nov. 1, 2011
Publisher: St. Martin’s
Dark Hunter #21
(Dream Hunter #5)
ISBN: #978-0312550059
Genre: Paranormal Romance
Format(s): Paperback (345 pgs), e-book
Book Source: Library
As a Dream-Hunter, Lydia has been charged with the most sacred and dangerous of missions. She’s to descend into the Nether Realm and find the missing god of dreams before he betrays the secrets that could kill all of them. What she never expects is to be taken prisoner by the Realm’s most vicious guardian.
Seth’s time is running out. If he can’t hand over the key to Olympus and the heart of Zeus, then his own life and soul will be forfeit. No matter the torture, he hasn’t been able to break the god in his custody. But when a rescuer appears, he decides to try a new tactic.
When these two lock wills, one of them must give. But Lydia isn’t just guarding the gates of Olympus, she’s holding back the darkest of powers. If she fails, an ancient evil will roam the earth once more and no one…
For those of you that have followed me for a while, you probably know that Ms. Kenyon’s Dark Hunter series is one of my favorites; however, I have been disappointed with the last few books. I feel that the overall story arc has been lost in an ever too-expanding mythology, and that the individual stories were beginning to suffer for it. I was this close to not reading The Guardian, but then I was told by another that this story was worth the read and brought the story back to basics.
Well, I’m sad to say that The Guardian was a big disappointment to me.
Lydia is a sweet, but fierce woman. In an effort to save the only father she’s ever known, Dream God Solin, she travels to a horrible hell dimension where she is captured by the creature tormenting her father. Seth has been lied to, betrayed, used and tortured beyond any of your worse nightmares for 4,000 years. He holds Lydia in hopes that Solin will hand over the one thing that will free them all… “the key.”
In general, I never felt a connection between Seth and Lydia. For me, there was no real romance – heck, they didn’t even really kiss until the book was two-thirds over. I felt that cared about one another, but I never saw a spark ignite. The sizzle factor in this book was pretty non-existent.
Seth has been held captive and misused for so long, it baffled me that he was able to deal with Lydia at all. All too often, Seth seems way too well adjusted: having normal feelings of lust and desire for Lydia, wanting to protect and care for her… It just didn’t seem plausible based on the descriptions of his torture. Then later, when the couple FINALLY get together, he knows how to be gentle and caring with Lydia. I just didn’t buy it.
Lydia had some great moments, but wow – was she a bit whiney and easily antagonized. For example, after the pair final escape from the hell they’ve been in, she gets all bent out of shape when a (stranger) woman asks Seth for directions and was flirting with him. It was ridiculous how badly she overreacted.
As for the overall story, I felt that it never really went anywhere. Malevolent god Noir wants the key to Olympus so he can kill off the Greek pantheon. Some Dream Hunters betray Solin. Bad guys want to kill Lydia. The climax and conclusion of the story was abrupt and I felt didn’t hold many satisfying answers.
I will say that there are parts of this book that were well written and enjoyable to read. And maybe a new-comer to the series would like it more than I. It could be I’m a bit harsher on this book because I loved this series and have been disappointed recently. Whatever the case may be, I have to say The Guardian was a take it or leave it kind of book for me.

5 responses to “Review: The Guardian”