Well, another year has come and gone. I am happy to report that I have conquered another year blogging and reviewing so many wonderful books. Once again, my total number of books read has declined from 2010 to 2011, I’m guessing it will be roughly 20 fewer books this year than last. However, my total number of blog posts increased dramatically, going from 237 posts in 2010 to over 360 in 2011! The joys of adding to the review team, increasing author visits and more giveaways has all added up to a year of fun!
I really have enjoyed blogging and discussing books with all of you. I hope you have enjoyed our time together as well! Putting aside my failed Reading Challenge and the disappointments of not keeping up, I have had a wonderful year! Below is my TOP TEN for 2011… How did 2011 go for you? What were your favorite reads during the year?
10) One big highlight was adding to the review team, for a total of six of us reading and reviewing books for That’s What I’m Talking About. B started late in 2010, while Una, Gikany, VampBard & Nima all joined me in 2011. I may need to change my blog name to That’s What We’re Talking About! 9) I finally started the Immortals After Dark series by Kresley Cole. I’ve been hearing what an amazing series this is forever, and I finally got around to reading it… well, the first 5 books or so. Anyhow, at least I started it!
8) STEAMPUNK! After testing the waters with The Iron Duke by Meljean Brooke in 2010, I came across another great steampunk book, Phoenix Rising by Pip Ballantine and Tee Morris (Review HERE) Then later in 2011, was the Meljean’s second steampunk novel: Heart of Steel. I adore the Iron Seas series. I also had the privilege to read Theresa Meyers new wild west steampunk The Hunter. I was in gadget heaven this year!

7) It was the year of the HAWKE, when Nalini Singh released the tenth Psy/Changeling book (in hard cover): Kiss of Snow. (Review HERE) I wasn’t sure if I’d like the pairing with youngling Sienna, but Ms. Singh did not disappoint!
6) I celebrated by one year blogiversary back in January with a huge celebration (and tie in with my 40th birthday), and I also participated in Book Blogger Appreciation Week this year. That was a lot of work, but fun as I got to “meet” so many new (to me) bloggers.
5) Larissa Ione may have ended the most awesome Demonica Series, but her new spin-off series, Lords of Deliverance, had two spectacular releases this year. This series takes her Demonica world to the next level and I cannot wait to see what she has in store for us next!

4) Kate Daniels. Do I really need to say more? Oh yes… Curran! Ilona Andrew’s Kate Daniels series is the bench mark for urban fantasy series. This year’s release, Magic Slays (review HERE), proved this series gets better as it ages and matures. The only problem with this series? The dear authors cannot keep up with their fans’ rabid desire for more Kate!
3) It was time to say goodbye to one of my absolute favorite series, ACRO, by Sydney Croft. In June 2011, the sixth and final book, Taken by Fire (review HERE) concluded one of the hottest, action-packed series around. The writing team of Larissa Ione and Stephanie Tyler outdid themselves with what I would call the ideal ending to the series.

2) The third book in Allyson James Stormwalker series, Shadow Walker (review HERE) was my favorite read in 2011. At only three books in, this series is definitely in my TOP 5, and this book was the best yet! Motorcycle-driving, tattooed dragon shifter… need I say more?
1) Attending AAD Philly and meeting my favorite authors and blogging sisters. For photos and details about the trip, click HERE. That trip alone has its own Top 10 list, and will be hard to ever beat! But I do have to mention one little thing: werefly!  Best. Night. Ever! 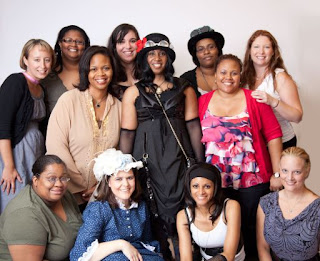 Thank you all for stopping by and supporting me and That’s What I’m Talking About.  Joyous New Year and Happy Reading!!