Hello Readers! Today I bring you debut romantic suspense author Jessica Lauryn. At two years old, Jessica became a devoted fan of both listening to and reciting the books her parents would read to her at night. When she was a little older (about four), she sought a greater challenge in her life, and began making up stories of her own, acting them out with her dolls. “When the dolls got “boyfriends,” she says, “I knew I was getting too old for dolls!”
A life-long lover of romance, Jessica took several writing classes in college, and told her professors she was one-day going to write soap-operas. When graduation came, she joined a critique group, and on a whim, decided to “write a romance novel.” That first attempt will forever be staying under the mattress…
Then, on a train ride to her internship in the fashion industry, Jessica finally cracked open her first romance novel. That hot August morning, she fell head-over-heels for the genre, and has been writing it ever since.
Jessica is most intrigued by dark heroes, who have many demons to conquer…but little trouble enticing female companions into their beds! She feels that the best romances are those where the hero is already seducing the heroine from that first point of contact. “Isn’t it the hero’s job to seduce?” she says with a grin. Jessica loves to see the sparks fly when a stubborn, domineering hero crosses paths with a bold, feisty heroine, and uses the combination frequently in her stories.
Jessica is here today to share with us a little about her debut novel, Dangerous Ally.  KEEP READING for your chance to win a copy… Details for GIVEAWAY are below. 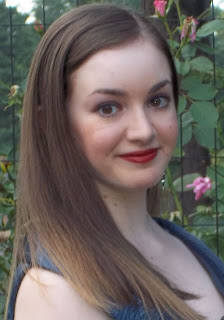 Please help me welcome Jessica to That’s What I’m Talking About. Take it away Jessica…

In fiction, villains typically serve as adversaries, wicked individuals whose intent is to foil the hero’s and heroine’s missions.  Not necessarily the case with The Pinnacles of Power Series.  In this series, (which will consist of somewhere between three and five or more stories) villains can be seen as flawed but mysterious individuals who, when understood, can come to be viewed as people, who’ve made the choices they have for a reason.  Given the love they’re starving for, they may even come to reform.  This is precisely how Lucas Ramone, diamond smuggling kingpin and hero in Dangerous Ally, came to be.
When I first began writing (what wasn’t then supposed to be a series), Lucas was a power-hungry billionaire, living in Westchester, NY.  Unbeknownst to his then-fiancé Lena Benson, Lucas was spending his days (and nights), managing several underground enterprises, including one which was importing stolen gems into the country.  He’s supposed to come off as evil and scary (and does).  But as an author who found these qualities fascinating, I wanted to know why Lucas had made the choices he had, and more importantly, to see if he could ever reform.
Delving into Lucas’s psyche, I learned several things about the character that I didn’t already know.  As a child, after refusing to take his lesson with his swimming instructor, Lucas’s father tossed him into the pond in their backyard.  Lucas survived, but didn’t walk away from the incident unscathed.  It was lessons such as this that taught him to regard everyone who crossed his path as an adversary, including the woman he will fall in love with in Dangerous Ally, Lilah Benson.  In turn, I gained a great appreciation and sympathy for Lucas.  With the understanding I acquired from learning about this and Lucas’s other past tragedies, I strove to create a character readers could love as much as I did.  I became so enamored with the character of Lucas Ramone, in fact, that Dangerous Ally, (which is NOT book 1 in the Pinnacles of Power Series) wound up coming first.  Like many of the best surprises in life, I found this to be a great one indeed.
Excerpt:
Feeling the warmth of tears in her eyes, Lilah rose from the table. She never became so emotional over nothing. What in God’s name was wrong with her?
Lucas’s strong hand came against her shoulder. She didn’t pull away. In fact, she had the strangest urge to just lean into him. Like somehow, he would take away all of her doubts.
“Lena’s happy in her life with her children, and with Alec Westwood,” he said. “I’d never begrudge her that. All I ever wanted was her happiness.”
The way he said the words, she almost believed them. He seemed to care, or at least, maybe was trying to be a better person.
“You’re trembling,” he said, reaching in before she could stop him. His finger brushed her quivering lip. 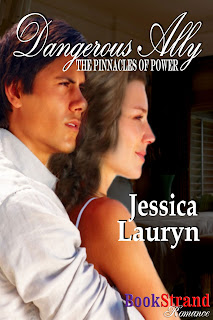 Her instinct was to smack his hand. But the tingling sensation racing from mouth to spine kept her in place. Lucas’s touch was so soft. It made her crazy. She was consumed by the strongest desire for his lips to be where his finger was now.
He took her wine glass and held it out to her. “Here,” he said. “This’ll calm your nerves.”
Senses returning with a bang, Lilah held up two hands in protest. “Are you trying to get me drunk?” she snapped, not entirely sure whether it was him she was angrier at or herself.
“Am I that obvious?” He laughed as if the whole thing was funny, setting the glass back down.
She enjoyed being in the company of a monster—there was nothing lighthearted about it!
“I’m guessing you’ve probably been down this road too many times, hmm?” Lucas replaced his hand on her shoulder.
“What road would that be, exactly?”
His gray eyes looked deeply into hers. “I’m sure I’m not the first man who’s tried to get you into a relaxed state, Lilah.”
“Actually—” She hesitated, not wanting to get so personal yet feeling she could probably tell him anything and he’d somehow understand. “It’s been a long time, longer than you’d imagine. After I finished college, I had every intention of becoming a journalist. Meaning I’d be out most of the time chasing a story despite whatever danger came with it. It’s all I’ve ever wanted, for as long as I can remember.”
He nodded, coming closer. “You must have been very persistent. It takes a good deal of perseverance and sacrifice to become a success at such a young age.”
Lilah sure knew that. While her friends had been enjoying their last semester of college, she’d been frantically gathering writing samples, sending them out to every newspaper who would give her the time of day. But had her father noticed? Even when she became one of the youngest reporters at the New York Times, he’d barely raised a brow.
Deep down, she knew this was why she’d accepted Raphael’s offer, even in spite of the danger that came with it. A story about Raphael Ramone’s family laundry wasn’t going to impress Blake Benson. But exposing Lucas’s diamond smuggling operation would be a print-worthy unearthing that would win her father’s admiration as well as her first Pulitzer.
She lowered her gaze. “I haven’t given up anything so wonderful.”
Lucas lifted her chin. “But if it came to that, do you think you’d be willing to make that sacrifice? Give up something you want—maybe something you want more than anything—to attain some ultimate level of self-victory?”
A chill came over her at his words. Lilah came back a step, unsure of what had just happened but wanting desperately to pretend it hadn’t.
Lucas cleared his throat. “Let’s get some air, shall we?”
Something she needed desperately. She followed him to the balcony, welcoming the cool night breeze as it caressed her hot skin.
“It’s beautiful here,” she said, hoping very much to steer the conversation in a new direction.
“It is.” He nodded and came beside her, bracing the rail with one hand. He slipped an arm around her back.
His body was warm—like a furnace—and he felt strong, as if he spent his days loading lumber instead of dabbling away at a computer.
Lilah shivered, goose bumps forming along her bare arms. It felt so nice being close to Lucas. Too nice. Maybe she’d just stay there with him a few minutes longer. They weren’t exactly hurting anyone by being in each other’s company.
He leaned into her, speaking in a tone she could only describe as husky. “Those men you never met,” he said, “that was their loss.”
She blinked, keeping her eyes on the night sky. “Please. A man’s the last thing I need in my life.”
“Are you sure about that?” Lucas asked, his warm breath coming against her ear. “Or is it possible you’ve been hiding behind your work for so long, you don’t even know how things could be?” His palm brushed her bare shoulder as he turned her to face him. “No one knows what it’s like to be hidden from the world more than I do, Lilah. You can trust me on this. I think we’re more alike than you realize. And it’s possible we’re both missing out on something incredible.”
She didn’t push his hand away as it cupped her cheek. Or his arm as it encompassed her waist. No, she let him do what he wanted. She wanted him to touch her…
Be sure to stop by later today for VampBard’s review of Dangerous Ally.
GIVEAWAY:  Ms. Lauryn is graciously giving away one (1) electronic copy of Dangerous Ally to one lucky commenter. Please leave your comments for Jessica by Thursday January 12, 2012 at 9:00 PM EST to be eligible for the contest. Comments may be left here or after the review of the book, later today. One entry per person, the winner will be selected from eligible entries using random.org. Contest is open internationally; please leave your email address so the author can send you the book. Thank you to Jessica for this fun giveaway!
You can find Jessica online at:
WEBSITE
FACEBOOK
TWITTER
LINKED IN