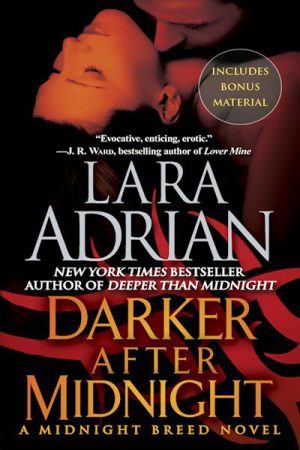 Darker After Midnight
Author: Lara Adrian
Release Date: Jan. 24, 2012
Publisher: Delacorte Press
Midnight Breed #10
ISBN: #978-0345530875
Genre: Paranormal Romance
Format(s): Hardcover (384 pgs), e-book, audio
Book Source: Author
In the dark of night, a blood war escalates within the hidden world of the Breed. After existing in secret for many long centuries, maintaining a fragile peace with the humans who walk beside them unaware, a single act of retaliation has put the entire vampire nation at risk of discovery. It falls to the Order–a cadre of Breed warriors pledged to protect their own and humankind alike–to stop Dragos, the power-mad vampire at the center of the conflict, before his push for domination can explode into catastrophe.
At the center of the Order’s quest is Sterling Chase, once a morally rigid enforcer of Breed law, now a warrior fallen from grace, whose biggest battle is the one he wages against his own savage nature. With addiction beckoning him toward eternal darkness, Chase’s path to redemption has never seemed more out of reach–until he finds himself drawn to a beautiful young woman who may be something much more than she seems . . .
Okay, so I’m just going to come out and say it: I LOVED THIS BOOK! I am in awe of the mastery Ms. Adrian has put onto the pages. If you have not read the Midnight Breeds series, go pick up book 1, Kiss of Midnight, NOW and do NOT start here if you want to enjoy the full potential of this book.
Last we saw outcast Breed warrior, Chase Sterling, he was sacrificing himself to save his former friends and comrades. Darker After Midnight picks up immediate after the conclusion of Deeper Than Midnight. Chase has been incarcerated by the human police force, the Order has gone into hiding and Dragos is taking over Boston. It’s a scary time for law-abiding Breeds. Chase is hell-bent on bring Dragos down, which includes killing off some very high-profile human Minions (mind-slaves to Dragos).
Right in the center of Chase’s path of vengeance is the exotic Tavia Fairchild, and soon they both discover she is so much more than anyone understands.  Tavia has been lied to her entire life and is inexplicable drawn to Chase. Although she fears him, she stays with Chase because he tells her the truth. Together the two attempt to discover her true origins and bring down Dragos.
So much happens in this story, but it never felt overwhelming or forced. I could write three pages alone of basic plot summary. But the bottom line is that whether you are new to the series or a long time fan, Ms. Adrian does a fantastic job bringing the reader up to speed on both the story arc and the characters without being redundant or intrusive. In the beginning, she writes “slice of life” sections, which give insight into the lives of all of the characters, but also provide an effortless way to catch up on the first nine books (which is especially great for those of us that don’t have the best memories). She also does a superb job of covertly mentioning facts so the can remember who is mated to whom, which warriors have moved on, etc.
I also love how Ms. Adrian paints a scene for her readers. She provides details that help construct almost tangible images. It’s done in a way without being wordy or obtuse.
The pairing of Chase and Tavia is exemplary! They both feel damaged by life and don’t trust others. They find truth and salvation in each other’s arms, but it takes time. I adore that they both make mistakes, and then realize that they want to be better for each other. And their smex scenes… WOW! They are intensely erotic.  Like most romances, the pair must give and go through a lot, but this is one of those situations where the couple just comes together for all the right reasons, and it feels perfect.
The book also brings the series fans full circle with a Gabrielle and Lucan subplot. The couple doesn’t dominate the book, but rather compliments the overall story – we started with them in the very first book, and it is fitting to come back to the Order’s leader and his mate. Lucan’s struggle between wanting to have a child and concerns over a violent future are heart-felt and emotionally wrenching. There is a scene between the two – a discussion about having a baby that showcased Lucan’s inner-turmoil and the complete love and devotion each has for the other, and it tore me up inside.
This was most definitely the conclusion of a major story-arc involving Dragos and his Gen One Hunters. But this is NOT the end of this amazing series. Ms. Adrian has already announced that the upcoming story arc will focus on the younger characters, with the next release focusing on the mysterious Mira.
So much happened that leads to the next story. We are given glimpses of the Breeds and Breedmate origins, Jenna is still evolving and Tavia is a miracle that leaves so many possibilities for the future. Without giving spoilers, I will tell you that this book changes the game in a MAJOR way and I am more excited than ever to see what comes next!
I honestly could go on and on. I have so much exuberance for Darker After Midnight because it is the perfect climax to this amazing series. I only hope that I got a fraction of how wonderful this book is within my review.

Personal favorite – a must read (A+)
In addition, Darker After Midnight is one of…

12 responses to “Review: Darker After Midnight”