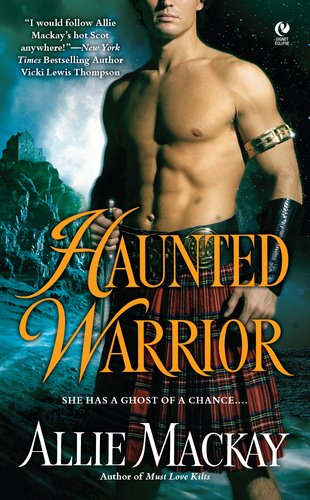 Haunted Warrior
Author: Allie Mackay
Release Date: Jan. 3, 2012
Publisher: Signet
ISBN: #978-0451235480
Genre: Paranormal Romance
Format(s): Paperback (352 pgs), e-book
Book Source: Publisher
Kendra Chase is exhausted from her work as a ghost whisperer, so she’s been looking forward to her vacation in Edinburgh. But work awaits her as the tiny fishing village is being excavated, and supernatural uprisings have been reported.
Graeme MacGrath knows the source of the psychic trouble. The excavation is disrupting the protective veil between this world and darker, more ancient ones. He hates to admit it but he will need the fetching Kendra and her paranormal abilities to save the town he loves from unspeakable evil.
Initial reaction: um. Wow. The heat with this one starts right away **fans self**. The tension in this title builds from page 1. The inner conflict for both the hero and heroine are tremendous, especially since they’re both keeping secrets from one another – secrets they believe will push the other away. Ha. As. If.
Kendra, our heroine, finds herself in the Scottish Highlands, walking. She senses something powerful – electric even – on the Highlands with her, and notices Mr. Hottie, clad in a kilt and cape. Wowza. She’s totally worried that she looks like scum – Ladies, don’t we always worry about this when we see the Man of Our Dreams!?!?! Kendra and Graeme are tossed together until Graeme makes it his mission in life to ‘protect’ her from the bad guy. Kendra, on assignment for Ghosthunters International, fears she is breaking one of her cardinal rules: never fall in love while on assignment. Meh. Can’t help when love finds us, right? Animal lovers: this one is for you! Kendra is an animal lover, too! What I really enjoyed about Kendra was her drive to be independent, but she wasn’t stupid about it. You know, the kind of heroine that does really stupid stuff just to prove she can do it, or to make a point? You won’t find Kendra pulling that stuff. Gotta say, I loved the epilogue… don’t ditch it 😉
Mr. Mystery Man, making his premier in the first several pages of the book, has looks and magnetism to spare. Think: Ronn Moss (from the soap The Bold and the Beautiful) in his younger days. After wiping up the puddle of drool and getting ice for my beverage, I continued to read. Graeme is Mr. Tall-Dark-and-Smokin’-Hot. His family has lived in the same village for ages, and they protect something powerful. Graeme had his own set of ‘inner turmoil’ going on, surrounding ‘who’ he was as well as his place in this world. Rather, his DUTY in this world. Once all that business was figured out, the HEA commences.
ABSOLUTELY breath-taking setting descriptions! I felt as though I was in the small Scottish town described. The castle ruins, as well as the general ambiance of the various locations were explained so well that I thought that I felt the harr on my face at times. What was above and beyond was Ms. Mackay’s ability to pull the ‘inner monologue’ from her characters and give us crystal-clear insight as to their thoughts about various things. While we mostly heard from Kendra’s perspective, there were a few gems from Graeme’s point-of-view as well. Character descriptions, especially those of Graeme, are stellar, as shown in this little snippet:

And she was about to fork her last bit of bacon when a shadow fell across her table. Looking up, she met Graeme’s smiling eyes, and her heart nearly threatened to burst from her chest.

“Lain serves up the best breakfast on the coast.” His deep, buttery-rich burr quickened her pulse, pouring over her like molten honey.

The look in his eyes made her prickle with awareness.

She blinked, sure her face was heating. “Yes, he does.” It was all she could think to say. He looked so good in his jeans and cream-colored, cable-knit Aran sweater. “I’ve never had a better breakfast.”

Her words deepened his smile. The attractive way his eyes crinkled did dangerous things to her emotions. She could so easily fall in love with this man. She feared she was already halfway there.

“It is a lot of food…” She put down her fork, hoping to hide her feelings by looking at her plate. “I’m not sure I can finish.”

“You’ll hurt Iain’s feelings if you don’t.” He set a hand on her shoulder, squeezing lightly. His touch send delicious shivers along her nerves. “Dinnae worry yourself. Even if you’re feeling full now, you’ll be glad for the energy when we’re out on the open water. A good Scottish breakfast will keep you warm.”

If her personal heat index rose any higher, Scotland would feel as balmy as Florida.

If I had to choose one thing that annoyed me, I’d have to say that a few plot-points were ‘expected’ and could have been done a bit more creatively, based upon the world that Mackay’s created. Not enough to REALLY bug me, but it’s really the only thing keeping me from giving this title 5 stars…