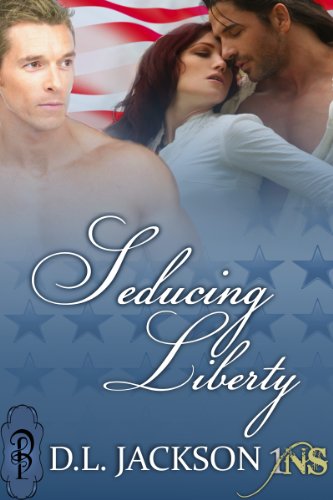 Seducing Liberty
Author: D.L. Jackson
Release Date: Nov. 7, 2011
Publisher: Decadent Publishing
One Night Stand Series
ISBN: #978-1613331521
Genre: Erotic Romance, time travel, historical/contemporary
Format(s): e-book (12k wds.)
Book Source: Publisher
Out of the mists of time, rides a story of espionage, love, and a 1Night Stand.
When Ryann Summers, an actress playing the role of Lady Liberty, an Agent in Washington’s Culper spy ring, asks Madame Eve of 1Night Stand for a date, a night she’ll never forget—where her identity is kept secret—she gets more than she bargained for.
Now she’s caught in the middle of the American Revolution and between two of the sexiest men she’s ever set eyes on. If she can survive the musketballs and the invading British forces, she just might find everything she’s been searching for—sex hot enough to set the sea on fire.
Seducing Liberty begins with a history lesson, and Jackson has clearly done her homework. One of the most well kept secrets of the Revolutionary War was the Culper Spy Ring, which operated in New York for General George Washington. Underneath the big clashes and key players in the war, these men and women fought another, equally perilous, battle for information that could be used against the British.
Madelyn Summers, recently betrothed and the daughter of a staunch British loyalist, refuses to accept her fate as a “brood mare,” and instead decides to help the rebels by passing them any military secrets she overhears. With tempting curves and a figure described as “lush,” Madelyn would be a dream come true for any man of the day. If only she weren’t so willful, of course. But a series of mishaps soon reveals that she’s not the only spy under her father’s roof.
The story then shifts to New Hampshire in the year 2011. Ryann Summers is a well-known movie actress portraying a Revolutionary spy. Unfortunately, being a star with curves in an age when chivalry seems dead isn’t pleasant, especially when working with two hot, but unavailable costars has given her a hunger for a ménage a trois.
From here on, Jackson tosses the rules out the window. Ryann thinks what she wants is impossible, given her status as an A-list actress. Luckily for her, with Madame Eve and her 1 Night Stand dating service, anything is possible. Ryann takes the reader through two more time shifts and a lot of sexy improbability before her story’s through.
Despite the engrossing beginning (I happily ignored other obligations to spend several hours researching Jackson’s historical details), the abrupt change to modern times and what follows is a bit jarring. The formal, partial authenticity of the first part of the story isn’t present in the second, and the adjustment took a little while. Soon enough, though, it became easier to just read along and let the story go where it would. There are a few highly amusing passages, especially when the very modern Ryann finds herself in the middle of Madelyn’s escape.
In the end, Seducing Liberty was a lot of fun to read. As with all the 1 Night Stand stories I’ve read so far, Ryann gets her wish and then some. As one of the stories in the series that isn’t about weres or other paranormal creatures it has a lot to offer. The sex scenes are relatively short, but oh so hot, and with the suggestion that the fun may not be limited to just one night after all, Jackson ends her tale on a very happy note.