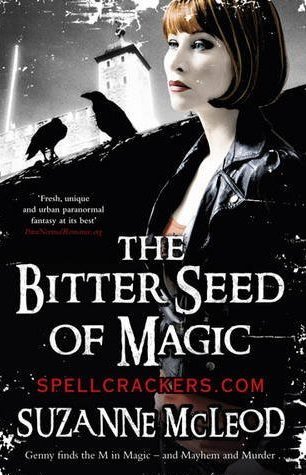 The Bitter Seed of Magic
Author: Suzanne McLeod
Release Date: Dec. 27, 2011
Publisher: Ace
Spellcrackers #3
ISBN: #978-1937007201
Genre: Urban Fantasy
Format(s): Paperback (357 pgs), e-book
Book Source: Publisher
On the surface, Genny’s life seems ripple-free right now. Finn, her sexy boss and — well, Genny’s not sure what else she wants him to be — has stopped pushing for a decision on their relationship. The seductive vampire Malik al-Khan has vanished back into the shadows. And the witches have declared her no longer a threat. But unless Genny can find a way to break the fertility curse afflicting London’s fae, she knows this is just the lull before the magical storm.
Then a faeling — a teenage girl — is fished out of the River Thames, dead and bound with magic, and Genny is called into investigate. As she digs through the clues, her search takes a sinister and dangerous turn, exposing age-old secrets that might be better left buried. Then another faeling disappears, and Genny finds herself in a race against time to save the faeling and stop the curse from claiming its next victim — herself!
The Bitter Seed of Magic is the third installment in the Spellcrackers novels.  As usual, Genny is up to her eyeballs in fae issues, curse issues, vampire issues and all important relationship issues.  By the end of this novel it seems everything is resolved.  Almost.
This is a difficult review to write.  Now that we have read two of these books, one of our main issues with these novels is something that seems to be characteristic of the author’s writing style.  The first half of The Bitter Seed of Magic is slow…Genny agonizes about past events and continues to be torn about on-going issues (see the list above).  However, as the murder mystery develops, the last half is gripping and exciting.  The ending is so sudden that it feels like “poof” here’s the ending.  The build-up to the end is too long and the ending is more summarized than experienced by the reader.
Genny is an interesting character.  She tries to be very independent and strong but she isn’t…and she can be incredibly dense at times.  It was very refreshing to watch her ask and plan for help in this novel.  She didn’t try to do it all herself.  She was much more open and worked well with others.  This brought us to a somewhat abrupt and information rich ending, but it did resolve the curse issue.
What really kept us reading The Bitter Seed of Magic were the on-going issues between her, Malik and Finn.  And because we just are too curious for our own good, we’ll read the next one.  We also enjoyed the fact that the novel is written with British slang and terms.  It is just fascinating to hear in one’s head when reading.  The mythology continues to be interesting, especially how the paranormal world blends with the mundane one.  The supporting characters are funny and captivating.  The fae and vampire politics add an entrancing element to the novel.  According to Ms. McLeod’s website, the fourth book, The Shifting Price of Prey is due out in June in the UK.

Books in the Series:
The Sweet Scent of Blood (Spellcrackers 1)

The Cold Kiss of Death (Spellcrackers 2)

The Bitter Seed of Magic (Spellcrackers 3)

One response to “Review: The Bitter Seed of Magic”