Hello Readers! Today I bring you paranormal author Jae Lynne Davies. Jay Lynne has always had an affinity for writing of any kind. However, it wasn’t until she lost her beloved Grandfather, and found herself writing a heartfelt eulogy, that her passion awakened.
Her favorite stories are those that don’t involve an average, everyday couple. She wants conflict, and she wants believable, but forbidden relationships. The more complex, the better. It’s the reason she loves the paranormal as much as she does. She wants to create those impossible situations that leave readers intrigued and thirsting for more.
She considers herself extremely blessed to be a wife to a wonderful and supportive husband, a mother to two of the most wonderful children a woman could ever ask for, and two dogs who have energy that rival her toddlers. When she’s not writing, she works in the ever-changing Real Estate and Mortgage industries, and she is always looking for creative ways to promote her work as an author.
Jae Lynne is a featured author attending Author’s After Dark in New Orleans. For more information about AAD2012, click HERE.
In addition, Jae Lynne is a nominee for the 2012 AAD Bookie Awards, for Fantasy Short Story of the Year with her release: The Contract. Keep reading to learn more about this story and enter to win a copy! GIVEAWAY details are below.
Please help me welcome Jae Lynne to That’s What I’m Talking About.
Twimom: Jae Lynne, welcome and thank you for stopping by.
Jae Lynne: Thanks so much, Jen. I’m excited to be here!
Twimom: I love that you want to write about complex couples that leave your readers thirsting for more. It’s why I love paranormal as well – the ability to stretch boundaries and go places not allowed in contemporary settings. Please tell my readers about the complex relationships found in your story MYTHIC.
Jae Lynne:  I’d love to. Let’s begin with my heroine, human/vampire hybrid, Gianna Marino. Her unique DNA, places her in great danger in the vampire world, as she shouldn’t really exist. As a result, her parents were eliminated by a vampire for creating an abomination. 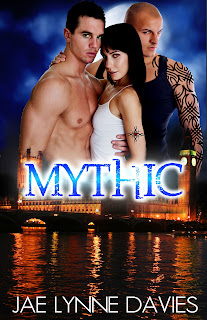 Over two hundred years she’s hunted the vampire responsible. When she finally locates her target, Mattias Vitale—the powerful leader of London’s vampire coven, he becomes infatuated with Gianna. Deciding to use this against him, she disguises herself as a human with the desire to be turned and infiltrates the coven with the hope of bending him to her will and destroying him from the inside. But, despite the fact she wants to enact revenge with every fiber of her being, she’s undeniably drawn to him.
Things become increasingly complicated when Nicholas Sutton—a vampire from another coven—enters the scene looking to put an old issue to rest.
She finds herself attracted to both men who happen to be sworn enemies. Neither of which know about her genetic make-up.
But when she discovers a secret that blurs the lines between good and evil, forever changing the course of her existence, destiny will soon determine on which side she’ll stand.
Twimom: You are currently working on the follow up story to MYTHIC. What are your plans for this series?
Jae Lynne: Yes, I’m currently neck deep in BLOOD MOON. This novel tells the story of Dante Diakos, a secondary character we meet in MYTHIC. We also continue Gianna’s journey as her story isn’t over.
This novel has taken a bit longer to complete than I’d like because of the extensive research of ancient Greek mythology. There are so many small details vital to the storyline that I simply can’t rush. But I promise to deliver an entertaining tale that readers will want to get their hands on at AAD in NOLA.
I have BIG plans for this series! The third novel takes Gianna and company to New Orleans in search of answers. What sort of answers? You’ll have to read BLOOD MOON to find out.
After the completion of book three, I have four additional novels outlined with more waiting in the wings. I hope people are as eager to read them, as I am to write them!
Twimom: Congratulations on your BOOKIE AWARD nomination. Can you tell us more about your your story The Contract?
Jae Lynne: Thank you! It truly is an honor to be nominated amongst so many talented authors. It’s a debut author’s dream come true.
THE CONTRACT was a completely new writing experience. The thought of a word count restriction sent a wave of panic (it also helped to have a few seasoned author friends turn up the pressure), but the outcome was such a rewarding one, I can’t wait to continue where I left off.
The story is a paranormal/urban fantasy featuring the Roman goddess, Diana (Greek, Artemis) as a contract killer for her father, Jupiter. 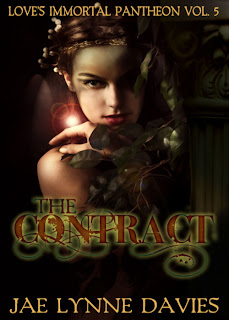 Set in modern day Philadelphia, Diana is a huntress donned in leather and armed with a crossbow, ordered to eliminate the sexy Cole Hunter who possesses an ancient artifact that has the potential to expose her entire Pantheon.
Of course, Jupiter won’t stand for exposure and sends Diana on the most difficult mission of her entire existence. Having spent a prolonged period of time in the modern world, Diana has shed a great deal of the selfishness most deities possess. That said, she’s also aware of her father’s wrath and fears for what might happen if she should fail—something she’s never done.
What happens when she gets more than she bargained for and develops feelings for her target? Read THE CONTRACT to learn more!
Twimom: You have attended Authors After Dark in the past and are a featured author in 2012. Why AAD? What are your favorite aspects of AAD?
Jae Lynne: I had the unique opportunity of attending AAD as both a reader and an author. In 2010, I attended my first AAD with the hope of mingling with authors and readers who shared my passion of romantic fiction.
Admittedly, I was blown away by the level of comfort. Everyone was so welcoming and the atmosphere was extremely relaxed, it was difficult not to enjoy myself. When they say AAD has the reader in mind, it’s not a gimmick. The convention offers a slew of free books unlike anything I’ve ever seen! Aside from the giveaways, there are informative panels, author/reader special events, parties, and other opportunities for readers to mingle with authors. Let’s not forget that the AAD staff is a team of intense individuals who work tirelessly behind the scenes—usually on a few hours of sleep (and endless amounts of coffee) to ensure a good time and very little hiccups.
I made the transition from reader/aspiring author to published author in late 2010 and can tell you that while things are different from the author perspective, AAD remains the convention that I’ll make a point to attend each year.
Twimom: I always like to ask authors about their reading habits… What types of books do you enjoy reading? What was your favorite read in 2011?
Jae Lynne: My favorite authors include Joey W. Hill, Sherrilyn Kenyon, Sharon Page, and Larissa Ione.
I recently discovered Jennifer Lyon’s Wingslayers and I’m completely hooked!
My favorite read in 2011? Each of my favorite authors released a new novel in 2011and I’ve enjoyed every one! But I’d have to say that Bound by the Vampire Queen by Joey W. Hill was a sequel I’ve been anticipating for a long time. As always, Joey created a masterpiece.
Twimom: What upcoming 2012 releases are you most excited to read?

Jae Lynne:  I’m looking forward to more Lords of Deliverance from Larissa Ione, Joey W. Hill’s first venture into mass market with Something About Witches, Sharon Page’s next Blood novel, and anything Sherrilyn Kenyon releases!
Twimom: Jay Lynne, once again thank you so much for taking the time to tell my readers a little bit about yourself and your writing. It was wonderful chatting with you.
Jae Lynne: It was an absolute pleasure to be here! I’ll be available to answer any questions or comments your readers might have. Hope to see you all in NOLA!
You can find Jae Lynne on line at
Her Website
Twitter
Facebook
Blog
Goodreads
More on The Contract:
The goddess of the hunt carries an entirely different meaning in Diana’s world.
A contract assassin for her father Jupiter, the Roman deity traded her traditional gowns for a crossbow and vowed to fulfill her duties by eliminating anyone who threatened the pantheon.
When she receives a contract to kill the sexy Cole Hunter—the heir to an artifact that could expose the existence of her people, she willingly sets out to meet her two week deadline and deliver Jupiter the man’s heart as proof of her success.
But when she grows close to her target, the heat between the two ignites. Diana develops feelings she’s never experienced and is faced with the decision to give Jupiter the human’s heart, or give Cole hers. The race is on to protect him from Jupiter’s wrath, before she loses him forever.
GIVEAWAY Thank you, Jae Lynne, for stopping by That’s What I’m Talking About.  Jae Lynne is graciously giving away one (1) electronic copy of The Contract. Please leave your comments for Jae Lynne by Wednesday February 8, 2012, at 9:00 PM EST to be eligible for the contest. One entry per person, the winner will be selected from eligible entries using random.org. Contest is open internationally; please leave your email address so the author can send you the book. Thank you to Jae Lynne for this fun giveaway!
Purchase Info:
Mythic:
Amazon
All Romance
The Contract:
Amazon
All Romance