Samantha: Thanks for having me! We met at AAD 2011 when you were having a fangirl moment with my friend Stephanie Julian. Not sure if you remember it, however. It was rather late in the evening at one of the parties. lol.
Twimom: OMG! I do remember that – I mean, I remember that moment when I was stalking Steph and meeting her friend, but I didn’t realize that was you! This year I’ll be on top of things!
Love’s Surrender, your ninth Brothers in Arms book was recently released (Ellora’s Cave, Dec. 2011). Can you please tell us a little bit about this sexy new story and the erotic series?
Samantha:  The series is based around veterans of the Peninsular War, which was one campaign in Britain’s war against France in the late 18th, early 19th century (@1800). The men became very close during the war and paired off as either best friends who shared women in bed, or as lovers. After the war the men can’t give up those close relationships and they look for one woman who can accept them as they are and make a three-way commitment so they can have a family and children.
In Love’s Surrender, Nick Wilkes and Oliver Gabriel are best friends, and have been since the war. At Waterloo, Nick was injured and Oliver thought he was dead for several days. Now Oliver has panic attacks anytime he is out of Nick’s presence. Because of this, the two have shared lovers for the last few years. At a party one Christmas Eve they are caught by Vanessa Carlton-Smythe as they try to seduce a young woman in a dark alcove. As soon as they see Vanessa both men forget about everything but pursuing the cool, blonde aristocrat. Vanessa is dangerously close to spinsterhood because of her family’s high standards, and she feels trapped in her life. During the holiday season the three have a whirlwind, scorching affair, but they know it has to end after the final day of Christmas–Twelfth Night. Or does it?
Twimom: Mmm… sounds hot! What are your plans for the future of the Brothers in Arms series?
Samantha:  I don’t have a set number of books planned in the series. I have several characters that have been part of the series since the beginning that still have not had their happily ever after. As long as readers continue to ask for more books, I’ll write them!
I’m tentatively planning on having Daniel’s book done this year. This book will be different than the others in the series because it will have two separate love stories, one m/m and the other m/f. No ménage in this story, since Daniel is, and has always been, homosexual and not bisexual.

Twimom: Are you working on any other titles at this time? Do you write any other genres?
Samantha: Right now I’m working on edits for the first book in a new Regency historical series called The Saint’s Devils. This series is mainstream, not erotic, and book one, The Devil’s Thief, will be the first new historical published by the new Loveswept line at Random House/Bantam. I’m very excited about this new series. It’s centered on a group of rakes that were friends in school. They’ve been nicknamed the Saint’s Devils after their unofficial leader, Sir Hilary St. John. Hil is a sort of Sherlock Holmes character, brilliant, enigmatic and hedonistic, and in each book he helps one of his friends solve a mystery involving their heroine. The Devil’s Thief will be released in November 2012, and book two, Tempting a Devil, will be released in December 2012.
I hope to finish another Brothers in Arms this year. Daniel’s story, as yet unnamed, should be out sometime at the end of the year, too.
My agent is also submitting an alternate history Western steampunk series that I’ve co-written with Mari Freeman, so I’m hopeful the series will sell this year!
Twimom: Wow… that all sounds great! I look forward to hearing more.  You have attended Authors After Dark in the past and are a featured author in 2012. Why AAD? What are your favorite aspects of AAD?
Samantha: I went to AAD last year because I’d heard such great things about the previous con from writers like Eliza Gayle. I was looking for something different since I’d decided not to attend RT (the Romantic Times Booklovers Convention). AAD was reasonably priced for my promo budget, sounded like it was a blast, has a lot of reader interaction and was in a city I’d never visited before. It was a win all around.
My favorite thing about AAD was the workshops. By far the best workshops I’ve attended or given. A great deal of thought went into the panel memberships, they were very well attended, and there was a wide variety.
Twimom: I always like to ask authors about their reading habits… What types of books do you enjoy reading? What was your favorite read in 2011?
Samantha:  Ack. I’m clueless. I can’t remember what I read last year. What books came out? I’m always behind. I’m behind on about four or five of my favorite series, so I always end up reading them a year or two later than everyone else! That’s bad, isn’t it? In my defense, I am kind of busy with the kiddos and a career.
(After a quick look at my Kindle) Oh, one of my favorite reads last year was actually a YA historical called She Walks in Beauty by Siri Mitchell. Loved, loved, loved it. About a young girl and her come out in Victorian New York. I highly recommended it, and everyone I know who’s read it has loved it, too.
Twimom: What upcoming 2012 releases are you most excited to read?
Samantha:  Again, behind. So books I can’t wait to read came out a year or so ago, lol. But I do want to read Kresley Cole’s Lothaire after all the hype. I hear good things. And I just read about a book called Bro-Magnet that sounds hilarious. I confess that I don’t pay attention to what’s coming, only what’s here. So until a book releases I usually don’t know about it.
Twimom: Sam, once again thank you so much for taking the time to tell my readers a little bit about yourself and your writing. It was wonderful chatting with you. I look forward to meeting you all over again in New Orleans.
Samantha: Thanks for having me! Can’t wait to see you again at AAD. 😀
You can find Samantha on line at 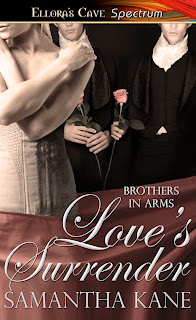 Her Website
Twitter
Blog
More on Love’s Surrender:
Lady Vanessa Carlton-Smythe is from one of England’s most well respected families and the daughter of an earl. She has lived an exemplary life—the perfect daughter, the perfect lady. Until one Christmas Eve she meets two men who unleash her secret desires. She can’t surrender her heart, only her body, and only for the next twelve days. After Twelfth Night their affair must end and she will return to a life that is slowly suffocating her.
Veterans Nick and Oliver have been constant companions since Waterloo. They share everything, including women and a bad reputation. When Lady Vanessa catches them in a compromising position, they are seduced by the longing in her eyes. Cool, distant, unattainable—the more she protests, the more they want her. Vanessa’s desires prompt the two men to finally give in to their feelings and become lovers. When desire becomes love, can they convince Vanessa to leave her privileged life behind and surrender to them forever?