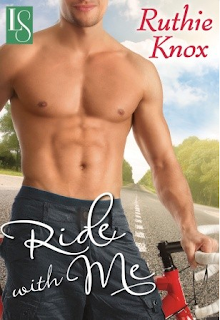 Ride With Me
Author: Ruthie Knox
Release Date: Feb. 13, 2012
Publisher: Random House
ISBN: 978-034553450
Genre: Contemporary Romance
Format(s): e-book
Book Source: Publisher
When Lexie Marshall places an ad for a cycling companion, she hopes to find someone friendly and fun to cross the TransAmerica Trail with. Instead, she gets Tom Geiger-a lean, sexy loner whose bad attitude threatens to spoil the adventure she’s spent years planning.
Roped into the cycling equivalent of a blind date by his sister, Tom doesn’t want to ride with a chatty, go-by-the-map kind of woman, and he certainly doesn’t want to want her. Too bad the sight of Lexie with a bike between her thighs really turns his crank.
Even Tom’s stubborn determination to keep Lexie at a distance can’t stop a kiss from leading to endless nights of hotter-than-hot sex. But when the wild ride ends, where will they go next?
Ride With Me is a contemporary romance tailor-made for anyone who loves to travel, or loves to dream of travel.  This is especially true if you are captivated by those quirky, one-of-a-kind places that are scattered across the country.  Everyone should probably see the Redwood National Forest and the faces of Mt. Rushmore in person, but have you ever seen the Shoe of Shoes in Clayton, Missouri?  Ride With Me revels in some of these unique destinations that you’re unlikely to see except from the kind of travel that happens at the pace of bicycle touring as well as must-see’s like Yellowstone National Park. The story opens with Knox’s over-thinking, over-planning Type-A heroine Lexie “Alex” Marshall and her search for a riding partner to take on the TransAmerica trail from Astoria, Oregon to Yorktown, Virginia, a total of 4,262 miles.
Knox’s anti-hero Tom Geiger does want to make this ride.  He does not want to do it with a partner and definitely does not want that partner to be a girl.  As a bike mechanic, he balks at being saddled with any partner; envisioning himself riding painfully slow, repairing flats, and never veering off the charted course for sight-seeing or adventure.  His sister Taryn, answers Alex’s ad and sets-up the pairing without knowing that “Alex” is a girl.  When Taryn finally confesses to what she’s done, Tom makes his own best introduction to the reader:

“Please Tom.  You can’t ride your bicycle across the country alone.  It’s insane.  You’ll end up being slaughtered by a serial killer.”

“I’m thirty-five, single, tattooed, and antisocial.  I am the serial killer.”

Despite his protests, he does agree to meet with Alex and ride with her until another partner can be found.  They meet at the coastal city of Astoria, Oregon and set out on an adventure neither of them will forget.
From an analytical perspective, Ride With Me is an interesting study in first impressions and all of the conclusions that we jump to in the initial fleeting moments of introduction with little or no real information.  Can we trust our gut?  Ride With Me, is aptly named.  The reader is literally along for the ride with Alex and Tom across hundreds and thousands of miles while they decide if their first impressions were sound.  We get their ups, their downs, and watch as their relationship grows and changes from awkward introduction to can’t-live-without-you hot.
When you just can’t escape each other, nothing can stay static.  You can’t hide your real self for weeks at a time, twenty-four hours a day.  The real you is going to show up whether you like it or not.  Alex almost makes a game out of naming all of Tom’s different moods and personalities.  Tom is more insightful than he’s willing to let on, but he’s watching Alex intently too.
There is an inherent intimacy in camping, sharing meals, and enduring any prolonged experience together.  On a bike, the only place to really escape the other person is into your own thoughts.  We spend almost as much time in Tom and Alex’s heads as we do listening to their outward dialog.  “There was little point in trying to bullshit yourself when it was just you and your thoughts, day after day, mile after mile.”  As Tom delineates however, he can’t escape Alex and gives in to his attraction fairly quickly.  The reader doesn’t have to wait too long for the heat.
The instant chemistry between Tom and Alex when they first meet is apparent even though they don’t want to like each other.  Alex even makes up a fictional husband in a weak attempt to just keep a measured distance between them.  When the daily intimacy of being riding partners forces them to acknowledge each other, the chemistry wins.  In Knox’s bio-brief, she makes the statement that she abhors an epilogue and insists a decent romance requires at least three good sex scenes.  I would say she more than delivered on her philosophy.  There is a certain predictability in the storyline, but it leads to a definite, finite happy ending which was more poignant than I expected.  I can also report there’s more than Knox’s requisite number of varied and creative sex scenes. *fans herself*

Really liked it a lot – recommend (B++)
And for more about AND chance to WIN Ride With Me, please see author Ruthie Knox’s guest post HERE.
It’s no surprise why of all the women on the That’s What I’m Talking About review team, this book came to me.  I love my carbon Trek Medone 4.5 road bike with a Terry Butterfly saddle almost as much as I love my kids—and it doesn’t talk back.  This is actually what I like about cycling.  It’s the only part of my day when I’m truly alone with my own thoughts.  Anyone who wants to ask something of me has to catch me first!
The TransAmerica trail which brings Knox’s characters together was established to celebrate the bicentennial of the United States back in 1976.  The event was titled The Bikecentennial.  All fifty states were represented by 4,100 participants in the first ride.  I was ten years old in 1976 and remember well the many celebrations.  I loved to ride my bike then too.  I can’t imagine making that trip on the heavy steel frames that were common then.  Many of the bike manufacturers from that decade are no longer even in business.  It’s not surprising that only 2000 riders, less than half, actually went the entire distance.

Tradition has it that riders first dip their wheels in the Pacific Ocean on the west coast and then in the surf of the Atlantic on the east coast at the completion of the ride.  Of course with today’s lighter bikes, you can dip your feet and actually hold your bike out of the water.  Without wheels, my frame is only 1100 grams, or two pounds.

The route was chosen to include multiple historic sites, but avoid the Great Basin desert, major highways, high-traffic zones, and large cities.  While I read, I imagined the possibility of making this trek.  When I wasn’t reading, I day-dreamed about it—especially if I could do it with a super hot guy like Tom Geiger.  By the time the unlikely couple reached the Blue Ridge Parkway in Ashville, North Carolina, where I’ve actually spent some time on the back of my husband’s Harley, I began to believe I might be able to really do it.  The fact that I’ve never ridden more than 30 miles in a single day before is entirely irrelevant, right?

View from the Blue Ridge Parkway
When I read the set-up and Tom’s sister’s reasons for not telling Tom about it until it was too late to back-out, I was reminded of the time my husband conveniently neglected to tell me we were going to ride the Tail of the Dragon, 318 turns inside of eleven miles.  Like Tom’s sister, my hubby knew if I knew ahead of time, I would find an excuse to avoid the experience.  At least Tom had a day’s notice.  I had about five minutes.  I have a pink dragon sticker on my helmet that you can only buy in Deal’s Gap which proves I lived to tell the tale.

Tom explains to the reader that, “He spent his days alone, fixing bikes, and riding them for free, and that was the way he liked it.”  The guy who fixes my bike, sadly, is a very skilled high school student.  He can make my bike hum, he’s as antisocial as Tom, but it isn’t like wondering if Taylor Lautner is legal yet. Perhaps if Tom were my mechanic, I might have a few more “issues” with my bike that needed his special attention.

After reading Ride With Me, I think I have to add riding the TransAmerica Trail to my Bucket List.  The question now is who is going to ride it with me?
Spoiler for RIDE WITH ME:  Like Tom, my husband too proposed very unceremoniously over Mexican food.  It still wasn’t glamorous, but I made him do it a second time on his knee, with a ring.
Endnote:   For more information on adventure cycling to go http://www.adventurecycling.org/
Bikecentennial ’76 Inc. evolved into the Adventure Cycling Association in the late 1970s. The success of the 1976 event led the Adventure Cycling Association to map several additional bicycle routes across the United States and Canada, in addition to the TransAmerica Trail. Among them are:

3 responses to “Review, Giveaway & Personal Notes: Ride With Me”