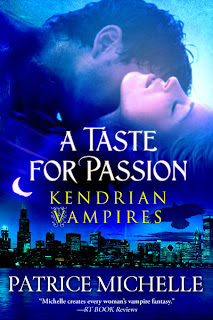 A Taste for Passion
Author: Patrice Michelle
Release Date: Dec. 2, 2011
Kendrian Vampires #1
Publisher: Self-published
Genre: Paranormal Romance
Format(s): e-book
Book Source: Author
Rana Sterling finally meets the man of her dreams and boy does he know how to push all the right buttons. Only, Mr. Tall, Dark and Too-Good-to-Be-True turns out to be just that–he’s beyond her world.
Lucian Trevane has a duty to fulfill. He’s expected to take the role of Vité, leader of all the vampires, but he knows he won’t take the position without his mate by his side.
Now, after searching seventy years for his reincarnated fiancé, he finally finds his mate in Rana. Only he has a slight problem, Rana refuses to become his vampire wife. Add to the mixture a vengeful vampire, a surprise twist and time ticking against him, Lucian will have to call upon all his vampire skills and beyond in order to draw Rana fully into his world.
Stopping by a small, out of the way antiques store after her beloved grandfather’s funeral, Rana Sterling has no idea that the rest of her life is about to intersect with her past one. A devoted loner, she’s completely unprepared for the gorgeous stranger that visits her in her dreams.
Lucian Trevane is perfect: thoughtful, adoring, sexy…and a vampire. Destined to lead, but unwilling to do so, he won’t take his rightful place until he’s found his long lost mate. Once he finds her, everything should be wonderful. If only she wasn’t so stubborn.
I was pleasantly surprised by this story, which is considerably more elaborate and involved than the cover copy suggests. Rana isn’t the flighty heroine just digging her heels in to spite her alpha male lover. Rather, she’s grieving and hesitant, and wary of the easy promise of happiness that Lucian seems to represent.
Lucian is a great character all around, his frustration with Rana generally due to a lack of information about her evolving role in his ascension to the leadership. He is generous and patient, and utterly devoted to Rana, despite all her misgivings, yet is never weak, either in his love for her, or in his dealings with other vampires.
The sexual heat between Lucian and Rana is lots of fun to read, as well. They have tons of chemistry and heat, and not just because the author suggests they do. Rana’s bafflement over her own reactions to Lucian isn’t too strong, and his determination to win Rana over with pleasure is a fine example of well-written, yummy goodness.
To be fair, there are a few of moments in A Taste for Passion that strain the workable boundaries of the unbelievable. Overall, though, it’s a good read with some great characters, and enough erotic tension that these moments don’t detract too much from the story. Michelle doesn’t ask too much of her audience in the way of blind acceptance, instead offering what I found to be an enjoyable paranormal love story with some interesting quirks. Overall, A Taste for Passion is a pleasing read, and I have high hopes that the next two in the series will be just as much fun.

4 responses to “Review: A Taste for Passion”