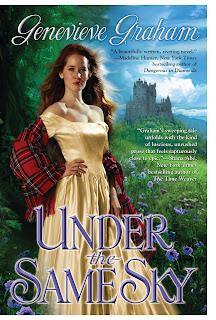 Under the Same Sky
Author: Genevieve Graham
Release Date: Jan. 3, 2012
Publisher: Berkley Trade
ISBN: 978-0425245233
Genre: Historical Romance
Format(s): Paperback (336 pgs), e-book
Book Source: Publisher
About the book:
The year is 1746. A young woman from South Carolina and a Scottish Highlander share an intimacy and devotion beyond their understanding. They’ve known each other their entire lives.
And yet they have never met.
Maggie Johnson has been gifted with “the Sight” ever since she was a child. Her dreams bring her visions of the future, and of a presence she knows is real. She calls him Wolf, and has seen him grow alongside her from a careless young boy into a fearsome warrior. And when her life is torn asunder by unspeakable tragedy, he is her only hope.
Andrew MacDonnell is entranced by the vision of a beautiful woman who has always dwelt in his dreams. When war ravages his land and all he has ever known, he leaves the Scottish Highlands on a perilous journey to the New World to find her, knowing that their only chance of survival is with one another.
Their quest to find each other across a treacherous wilderness will test the limits of courage and endurance, guided only by their dreams–and by the belief in the true love they share.
What VampBard’s talking about:
Under the Same Sky didn’t really feel like historical fiction.  There was actually a paranormal element that drew me in, kept me guessing.  Normally, I’m not one for historical romance.  However, Ms. Graham chose to use a Scottish Highlander as her hero.  I never turn down a man in a kilt!
Maggie was a strong heroine.  Warning:  she goes through some tough situations that can trigger emotional responses.  I liked the way she bounced back from some terrible stuff.  I also enjoyed the way she integrated with her special ‘skills’ into the Cherokee lifestyle.
Andrew was one helluva Highlander Warrior.  The battle scenes were well-described, and I felt as though I could hear the clash of swords and the smell of blood.
I think Ms. Graham did a great job with description.  Sometimes, however, I felt she went beyond what was necessary for the reader to understand where the characters were physically & emotionally.  For my tastes, there was too much side story happening and not enough about the ‘union’ of Maggie and Andrew.  While that might not bother others, it’s something I need.  I need to watch the building of the relationship.  I didn’t feel as though Andrew and Maggie had really enough to base a relationship when he rode in ‘on his white horse’, and it seemed to be a wham-bam thing.  I like the concept of knowing someone before you’ve even met, as was done in this book; however this story just didn’t hit home for me.
VampBard’s Rating:

Purchase Info:
Under the Same Sky

UPCOMING RELEASE & BLOG TOUR (plus Giveaway!) Readers: I am happy to announce that we are going to be a part of Genevieve Graham’s upcoming blog tour for Sound of the Heart, the sequel to Under the Same Sky. The blog tour runs during the month of May. The Grand Prize for the tour is a signed copy of Sound of the Heart PLUS a four cd set of relaxation cds created by my incredibly talented musical friends, Cori Ashley and Ed Franks. Please visit Ms. Graham’s blog tour website for more details AND check back here on May 4, 2012 when we will host Ms. Graham’s blog tour! 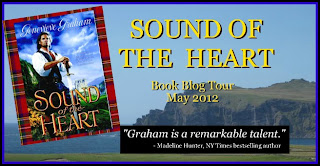 One response to “Review: Under the Same Sky”