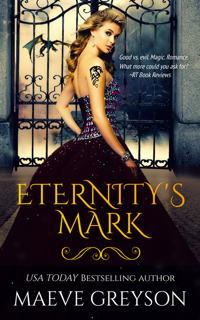 A chill wind howled around the skirting wall, whistling its way in from the churning sea. An early-evening mist swirled atop the chopping waves battering against the base of the gray, jagged cliffs. Hannah shivered as she scanned the black, weather-worn stones of the castle. She hugged herself, tightening her jacket closer as she rubbed the tingling skin at the back of her neck. Wow. All this place needed was some eerie organ music, a howling wolf, and the rattle of chains echoing in the back ground.

And that smell. Whew. The air reeked with an unbearable fog. Hannah choked back a gag. Heaven above, what caused that stench? Something pungent and acrid, like a cross between rotten eggs and singed hair, battered against her sense. Hannah wrinkled her nose and covered her face with one hand as her eyes watered until tears streamed down her cheeks. The memory of lab experiments with smoking sulfur came to mind but something indescribable layered along with the noxious vapor… decayed fish, maybe?

“Taggart, what is that god-awful smell?” Hannah mumbled behind her fingers.

Taggart lifted his head and sniffed. “I dinna smell anything unusual in the wind. What does it smell like to ye?”

Hannah squinted more water from her eyes and prayed the tears would relieve the ferocious burning caused by the toxic ammonia-like fumes cutting through the air. She tightened her grip on her nose and gasped a quick intake of air through her mouth. “I caddot belieb you caddot smell dat. It sbells like sodedody’s filled a hair bag with chidden shid and sed id on fire!”

Taking another quick breath through her mouth, Hannah released her nose and repeated, “I said I cannot believe you cannot smell that. It smells like somebody’s filled a hair bag ful of chicken shit and set it on fire!”

“Oh that.” Taggart nodded. “That’s Draecna scat. Dinna worry. When the tide comes in it will cleanse the feces from the rocks below and the odor willna be nearly as offensive.”

Hannah stared at him and clamped her hand over her face. Did he just tell her she smelled Draecna shit? This enchangted wonderland that was supposed to sweep her off her feet reeked so ripe it nearly burned her eyes out of their sockets. “Can’t you teach them to shit out to sea? Or will it destroy the ecosystem in this part of the ocean?”

“Ergonomics,” Taggert replied with a shrug. “They canna fly and shit at the same time.”