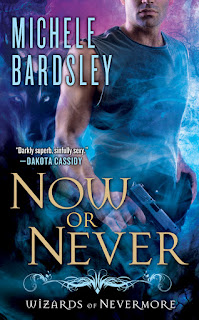 “Thank you,” she managed. “It’s nice to be able to speak again.” She eyed the young wizard and then tilted her head up. “Are the globs all gone?”

Taylor made a noise between a growl and grunt, and the boy took the glass from Norie, then scurried away. When she looked at the sheriff, she saw him scowling in Emmett’s direction.

“He doesn’t mean any harm,” she said.

“That’s worse,” said Taylor. “He’s like an overgrown puppy, all legs and enthusiasm and no damned sense.”

Norie bit back a grin and looked down at the floor until she could school her features. She didn’t think the sheriff would be too thrilled to know that she found his ire cute rather than fearsome. Wait. No. Not cute.

“Can you remember what happened?” asked Gray. He knelt down, his expression creased with concern. Nevertheless, she saw the shadow of suspicion lurking in his gaze. Well, why should he trust her? She wasn’t exactly a reliable witness, not even to her own trauma.

“I called up some ghosts,” she said. “I tried to do what Emmett told me, but honestly, his instructions were …” She trailed off, trying to think of a kind way to describe his harried teaching style.

Gray slanted a look up at the sheriff. Norie saw the man’s lips quirk, and then watched as he swallowed the laugh that had certainly threatened. He returned his attention to Norie.

“So, yeah, I tried to follow his instruction, but it wasn’t like he said at all. The magical strands and tying them all together? It was more like … seeing this ocean of cold and dark. I could touch it. I was afraid of falling into it, drowning.” She shivered. “Death really is all around us. I can see it. Well, I could.”

“And the ghosts just came to you?”

“All at once. Dozens of them, and they were all talking and trying to tell me so much.” She blew out a breath. “The worst part? All those emotions. Sad and scared and angry and desperate. They were like coiling snakes, squeezing me.

Gray nodded. “Emmett said you were a thanaturge.”

“Yes,” she said. “But I don’t understand. I’ve lived my whole life without magic. I was raised mundane. If I really do have powers, I don’t know how to control them. Or what my purpose is.” She glanced at Taylor. He was frowning down at her, his arms crossed. “Taylor saved me. Again.” Her gaze dropped to his hands. “What happened?”