Hello Readers! Today I bring you romance author Dara Young. Dara was born in Lafayette, Louisiana, one of two children and grew up in Florida and Alabama. She later graduated from Auburn University, Montgomery with a BS in Political Science and a minor in History.
Her mother once asked her what she would do with a poly sci degree. At that moment she happened to have a romance novel in her hand, the author of which was a poly sci major. She quickly held it up and said, “Well, I can write romance novels!” How prophetic!

She met her husband her first week living in New York City. While he does not share Dara’s love of books, he does support her writing wholeheartedly! They were married in November 2000, and now share a beautiful home in Southern California.
GIVEAWAY: Dara is hosting a giveaway during her blog tour for The Cancan Dancer and the Duke. For each comment posted over the 12 days, Dara will give you one entry into a drawing for a $25 gift card to Amazon.com. Click HERE for more information.
Please help me welcome Dara to That’s What I’m Talking About. Take it away Dara…
The Trials and Tribulations of Being a Duke
I am here to talk about my new release, The Cancan Dancer and the Duke. In this story Ethan is out carousing and becomes infatuated with a lowly dance hall girl. He pursues her as a fling, thinking once he has her she will no longer hold the same allure. Of course, we all know these things never work out the way the characters expect. Some of this is because, as a writer, I am perverse in my need to make my characters miserable before I let them have happiness. *evil grin* But in a historical romance, society’s rules and strictures govern a large portion of the character’s actions and reactions.
“Following are some rules of conduct a proper female must adhere to:
-Courting the Victorian Woman by Michelle J. Hoppe 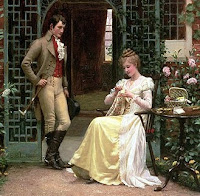 As a Duke, Ethan does not have the freedom to marry as he chooses. There are certain expectations he must meet in choosing a bride.
“In the Victorian era, marriage was not as romanticized or fairytale-like as depicted in many novels of the time. On the contrary, love actually played a very minor role in the majority of matrimonies that took place. An engagement was entered into as one would approach a business deal, and there were some generally accepted rules and guidelines to follow.
The Rules
-Marriage in the Victorian Era by Jen Ziegenfuss
Needless to say, Ethan’s dance hall girl does not measure up, being of low birth with no dowry. At least, this is what he believes.
It was fun making him struggle with the strictures of his life vs his emotional blossoming. He attempts to find a viable solution, one that could be expected of a man of his era. I wrote him this way because it felt true to his character. He is willing to flaunt lesser rules, but he has yet to come into his own enough that he would be comfortable throwing caution to the wind to marry so far beneath his class.
He is an alpha male, but still a newly made Duke. He walks that fine line that most alphas walk, but his heart with its soft gooey center (sorry I’m on a diet and craving junk food!) pulls him back from the brink of assholedom. In the end, he wants nothing more than to claim and care for the woman he loves.
So, are you a fan of alpha men? What do you like most about them? How about all those rules for courting and marriage? Were you aware of how complicated life was?
Thanks for stopping by to celebrate with me and remember to comment on each post during the blog tour for more chances to win! (Not sure what I’m talking about? Click here.)
Post Resources:
http://www.literary-liaisons.com/article009.html
http://www.clas.ufl.edu/users/agunn/teaching/enl3251/vf/pres/ziegenfuss.htm
The Cancan Dancer and The Duke
The Wild Rose Press
Can a lady on the lam and a duke on the make find love at the Moulin Rouge?
Cathedrals and museums are not Lady Charise Colton’s idea of European adventure. Turn-of-the-century Paris beckons, and she wants to grab it while she can…or rather, cancan. Flirting with fate and half of Paris, Charise eludes her chaperones and joins the cancan revue at the Moulin Rouge.
Ethan Greer, Duke of Lofton, is in Paris to settle some estate business. Chafing under his responsibilities, he discovers an enchanting distraction at the Moulin Rouge, a flirtatious dancer who stirs his lust and something more. He must have her—even if it means offering carte blanche.
Terrified of discovery, Charise tries to hold her persistent suitor at bay, though her heart has already surrendered. Will she lose him if he learns the truth, or is love enough to bind the cancan dancer and the duke? 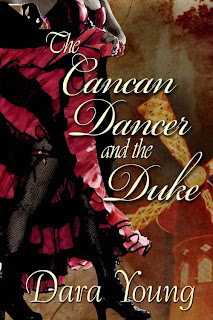 Excerpt:
The singular sound was a soft whisper at first. The audience strained forward to catch even a note of the eerie melody carried on the fetid air of the cafe. As the song picked up, her voice grew stronger, the words more clear. Ethan relaxed into his seat and let the warm rich alto caress him. His body grew warm with the promises carried by the witch’s husky tones.
He remained unaware of anything in the room except the siren walking toward him. Each steady, unhurried step she took further drew him in. His gaze feasted on the curve of her hip, the swell of her breast. Ethan rode the knife’s edge between lust and propriety.
The song described, in lurid detail, two lovers in the throes of passion. Upon reaching him, the dancer propped the toe of her boot onto the edge of his seat—square between his thighs. The luscious creature presented impossibly sheer bloomers which hid everything and yet nothing, causing him to let out the breath he, until now, unknowingly held. His cock grew rigid, the uncomfortable throbbing causing him to shift. The desire to haul her into his arms and demonstrate every action she described with the most sensuous mouth he’d ever seen rode him hard. Her full lower lip begged for his kiss. Ethan wanted to see it slick and glowing pink from his attentions.
The wanton dancer continued to taunt him, but his good breeding won out. Forcing himself to stay seated, his fists balled and his jaw grew rigid with frustration, but his raging lusts remained leashed. The song ended, sending her into the nether regions of the cafe in a swirl of skirts.
Add it to my shelf at: GoodReads
You can find Dara at:
Website
Facebook
GoodReads
Klout
Lady Jane’s Salon San Diego
LinkedIn
Pintrest
Twitloss
Twitter