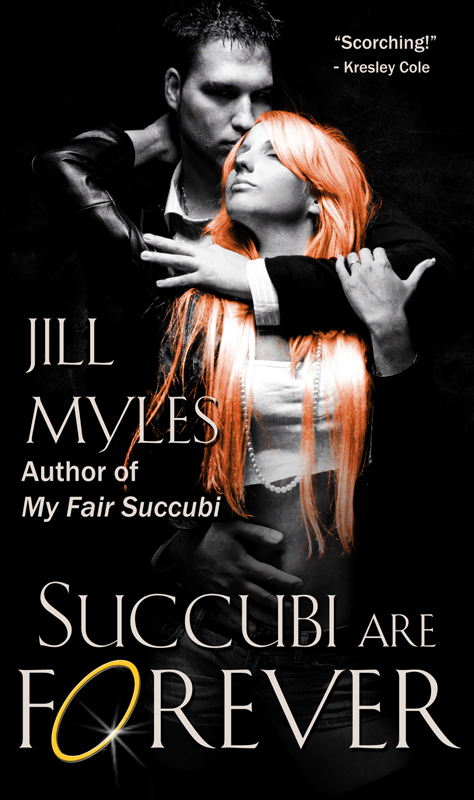 Succubi Are Forever
Author: Jill Myles
Release Date: April 19, 2012
Publisher: Self-Published
Succubus Diaries #4
Genre: Paranormal Romance
Format(s): Paperback (coming soon), e-book
Book Source: Author
Tasked by the Archangel Gabriel, Jackie Brighton must find two more lost archangel halos before she’s free of her deal. But she’s not the only one hunting for the immense power the halos bring, and everyone around her has motives – succubi, serim, and vampire. It’s a race to the finish line, and only one person is going to come out on top.
But will Jackie stand tall when even her allies are set to betray her? Noah Gideon is back, and he’s never liked taking ‘no’ for an answer. The mysterious assassin Sophie is helping out, but Sophie has her own agenda. So does Jackie’s newest rival, the ancient hetaera Phryne, who wants to use the halos to give a new world to succubi everywhere – one that doesn’t involve their masters.
Every immortal wants those halos, but Jackie’s not sure they’re worth her life, or Zane’s freedom.
But she might not have a choice…
This book is truly a work of love from Ms. Myles to all of the fans of her fabulous Succubus Diary series. It is a fitting close for Jackie’s story and a must read for those that follow this series. IF you have not yet picked up Ms. Myles’ series – do so now and start with the first book, Gentlemen Prefer Succubi. This series is a crazy, fun, sexy tale told from the first person POV of newly created succubus, Jackie Brighton.
The fourth full-length story, Succubi Are Forever, opens with Jackie and BFF, fellow succubus Remy, along with Jackie’s boyfriend, Zane (*swoon*) in the midst of an attempt to find out the hidden location of two lost halos hidden here on Earth. In a previous story, Jackie made a deal with Archangel Gabriel to find the remaining two halos for a boon.
Of course, this is Jackie, and things never go smoothly. Remy and Jackie are kidnapped by a powerful succubus, Phyrne, who feels that all succubi masters are evil and no good. (Succubi are created through a process involving both a vampire and fallen angel / Serim. These two males become the succubi masters and have the ability to control the succubus completely.) Phyrne uses the premise of “freeing Jackie from her masters” to try and find the halos for herself.
Once Jackie and Remy escape, they set off in a race to find the missing halos. Unfortunately for Jackie, the journey involves her Serim master, Noah. In the past, they parted on difficult terms and he is jealous that Jackie chose Zane, her vampire master, over him. The adventure is thrilling and action packed, and the chase for power doesn’t slow down until the very end.
I am going to sum up my feelings about this book with WOW! This book is really good! Jackie has grown up in the past year. She’s picked Zane over Noah and is more focused, less whiny. And even throughout this book, we see sides of Jackie that were never really present in previous books. She and Remy make a great team. And the humor… it is abundant. Ms. Myles makes me laugh! Remy is also growing up due to her relationship with Ethan. I just adored the entire gang and couldn’t get enough of Zane/Jackie and Remy/Jackie.
Noah is the perfect jaded ex-lover. His character is aptly written, showing the reader all the reasons why Jackie went with Zane over Noah. He continually compels Jackie to suit his needs. He knows it hurts her when he commands her, and I think he does it because she hurt him in choosing Zane (not to mention the punishment he is receiving for his unknowing part in creating Jackie.) If you were on the fence about Team Noah/Team Zane before this book, I think Succubi Are Forever more than seals the deal!
Zane is still sexy as ever! I am in love!! (For those that missed it, I wrote a love letter to Zane for Vampire Book Club, HERE.) He cares deeply – loves – Jackie, and is so hot – made more so now that he can show his love without fear. His support of Jackie during this book brought new depth to both characters, and I really cannot say enough about how much I adore this couple.
Newcomer badie, succubus leader Phyrne is an ideal protagonist. She is evil and manipulative. Her Vagina Sisterhood (Ms. Myles’ humor is fabulous!) is a mix of both willing and unwilling succubi, but since they are “trapped” by Phyrne, they form a potentially powerful nemesis.  She continually gave me the creeps.
Remy is a dear and shines in Succubi Are Forever. She has matured – caring more about her friends than herself… at times! BUT she is still crazy and self-involved. She has retired from the porn industry and is writing her memoirs (under the supervision of straight-laced boyfriend, Ethan). Each chapter has a quote from Remy’s work in progress. The quotes are freakin’ hilarious–same with the ever changing name of her book.
The story has several well-planned twists and turns. But there is one – a MAJOR one – that will leave your jaw on the ground (and really, don’t read it at 3:30 in the middle of the night – not good!) I felt the story overall was very strong and fulfilling. The only negative thing I have about the book is that Phyrne disappears a bit too quietly. In my opinion, she wouldn’t have taken defeat so easily. However, with that said – Ms. Myles may bring her back in a future story. I would love for some succubi smack-down!
All-in-all, Succubi Are Forever is a wonderful romance and thrilling action-packed ride, full of great twists and a delightful ending. It is an entertaining mix of action, suspense, and heart. I certainly hope Jill gives us more from this series!!

Succubi Are Forever (The Succubus Diaries #4)

3 responses to “Review: Succubi Are Forever”