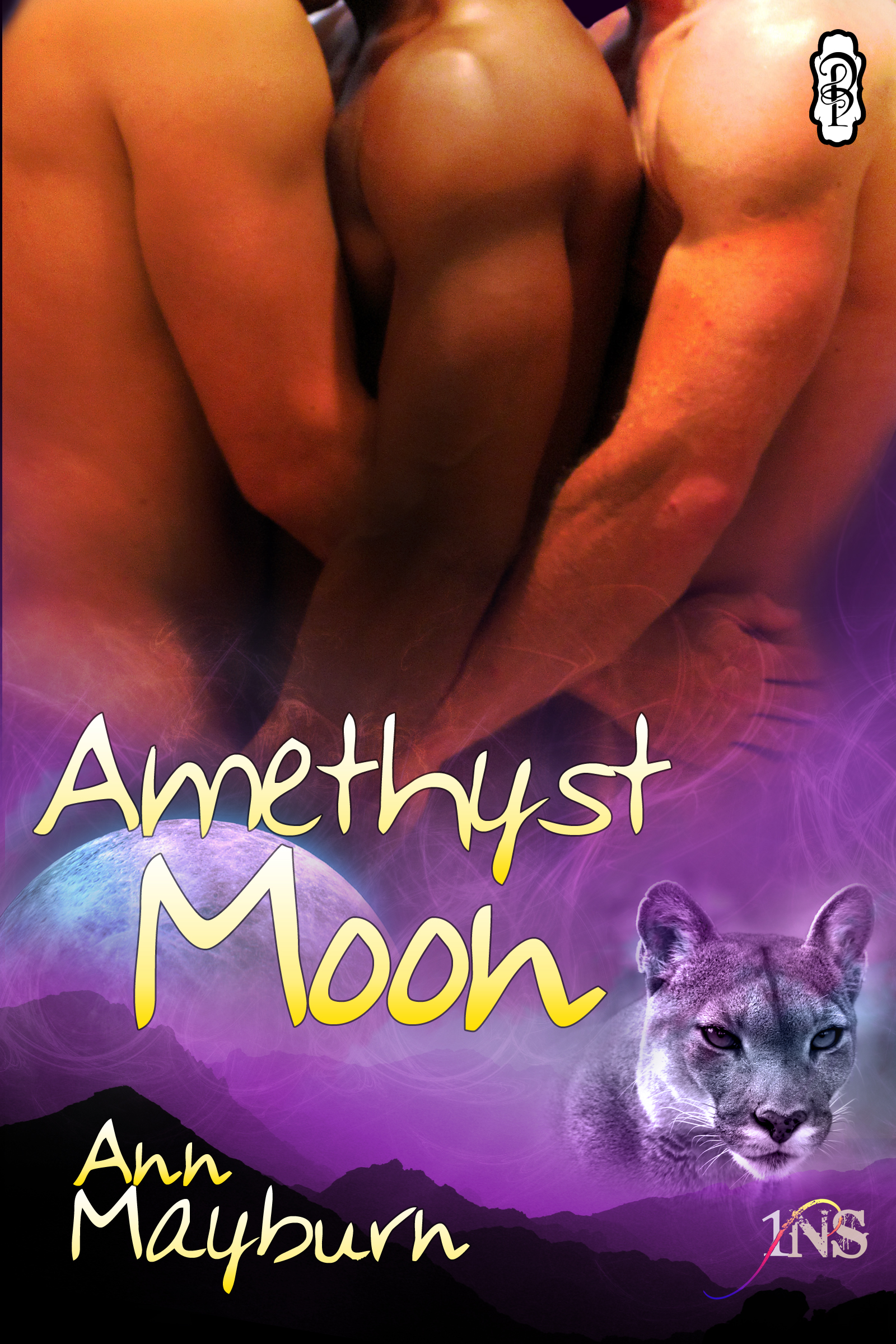 Amethyst Moon
Author: Ann Mayburn
Release Date: Dec. 27, 2011
Publisher: Decadent Publishing
Prides of the Moon #5
1 Night Stand Series
ISBN: 978-1613331828
Genre: GLBT, Paranormal Erotic Romance, m/m/m, Novella
Format(s): e-book
Book Source: Publisher
Noah Braxton’s world has been turned inside out and upside down ever since the fateful moment six months ago when he was turned into a shifter by a dying college girl. She made him promise to look after her sister, Giselle, and in an effort to sooth the dying girl he promised her that he would, not realizing the sacrifices he would have to make to keep that promise. Bound by his oath, Noah struggles to fulfill his role of beta to Giselle, an Alpha female, but he can’t be everything she needs. He’s gay and in order to bond properly with his Alpha female they would have to have sex. Without that bond with an Alpha he is slowly going crazy but he can’t force himself to be attracted to a woman. His last hope at saving his mind and his soul lies with Madame Eve of the 1 Night Stand matchmaking service being able to find him a male Alpha that can bridge the gap between himself and Giselle.
Marcus and Vashan have come to Morgantown, WV in the hopes of finding an Alpha female to complete their Pride. Instead they find Noah, a man on the edge of insanity who is also a natural dominant. Despite this both men are instantly drawn to Noah and decide to help him. Marcus will have to use all his strength as an Alpha to dominate Noah and show him that submission to his Alpha doesn’t make him weak.
Noah has a problem. As a newly-turned werepuma, a rarity in the shifter world, he has a lot to learn, but the human that he was and the beta he’s expected to be are warring within him. His Alpha, Giselle, has tried to help him, but there’s only so much she can do without a full bond with Noah, and he’s becoming increasingly unstable. With the help of the 1 Night Stand dating service, they finally have a chance at a bond through Markus and Vashan that would lead to Noah’s salvation as well.
As a fan of Ms. Mayburn’s Prides of the Moon series, I was very excited to be able to read Noah’s story. Markus and Vashan are two of my favorites from the series so far, and the glimpse I got of Noah when reading Giselle’s story in Opal Moon made me even more eager to find out about him. As always, the omniscience of Madame Eve is right on target, and she sends Noah exactly what he needs, not only for his Alpha, but also for himself.
Finally understanding Noah’s origins and the resulting precarious situation he and his Alpha find themselves in was very satisfying. The sexual interplay between the three shifters, however, was even more so. There was one potentially disturbing moment when Noah fought his status within their threesome, but it was brief, and was a reminder of the dynamics present in the idea of “pack.” Ms. Mayburn’s characters seek out and fulfill a true hierarchy, as pack animals do, and in the case of Markus, Noah, and Vashan, the need to find the place where they belong takes quite a bit of exploration. Which I ended up enjoying a good deal.
Although it’s fairly concise, Amethyst Moon has a lot going for it. Even knowing that Noah would be all right, reading about his history still made me feel hopeful that his connection with Markus and Vashan would work out. These three men are gorgeous together, and Ms. Mayburn’s explicit scenes are successfully descriptive without being weighed down by flowery prose. Amethyst Moon is a strong, extremely sexy addition to the Prides of the Moon series, and I very much hope there are more to come.