Hello Readers! Today I welcome author Jes Young. Jes was a copywriter at Random House for eight years before leaving what she describes as a book lover’s dream job to be a full time mom. She earned a BFA in creative writing from Emerson College (she thinks it’s under her bed). Like so many writer / moms, she does most of her writing between the hours of 11PM and 2AM. Jes’s latest release, Tab Bennett and the Inbetween, is the first book in her new Princess of Twilight and Dawn paranormal series. Keep reading for more about Tab Bennett and the Inbetween.
Please help me welcome Jes to That’s What I’m Talking About. Take it away Jes…
I’d like to thank Jen for having me over today to sub in while she’s off at the Authors After Dark conference in New Orleans. Although I wish I was at AAD too, I’m very excited to be here! Because it’s been on my mind, I thought we’d talk a little about literary love triangles.
If you’ve been involved in you, you know there’s nothing worse than finding yourself at one of the points on a love triangle. It’s messy. Painful. There’s crying and back-stabbing and swearing. Sometimes, the whole thing breaks down into fisticuffs. In the end someone is alone and broken-hearted, awash in a sea of misery and Haagen Dazs.

I speak from experience. In my early twenties, I was involved in one that ended with me crying, drunk, and hugging a parking meter on a dark street in London at 2 o’clock in the morning while the other girl involved tried to convince me that I deserved Kevin more than she did. (As an aside, it turned out Kevin didn’t deserve either one of us.) I’ve made a point of avoiding love triangles ever since.
In fiction though, the kind I write and the kind I read, I can’t get enough of them. The very things that make love triangles unbearable in real life – the high drama, the indecision, the unsettled heart-ache – make them so damned compelling on the page! Which is why you’ll find a sharp little love triangle at the heart of Tab Bennett and the Inbetween, tucked in amidst the disappearances, the assassination plots, and the eternal struggle between Light and Dark.
Tab started dating Robbin, the proverbial boy next door, when they were teenagers. Now, ten years later, they’re engaged. She’s got her future with him all planned out until Alexander shows up and she discovers she’s an exiled Elvish princess and he is her destined betrothed come to claim her hand. To make matters worse, Tab and Alex have been placed under an enchantment that was meant to ensure their happy life together but has only succeeded in making it impossible for them to keep their hands to themselves.
Here’s an excerpt from right after Tab and Alex . . . um . . . meet for the first time.
“I want the enchantments broken, and I want them broken now.”
I had spent the whole night before seething, wanting Alex with every part of my body and Robbin with my whole heart. I was torn between them in a way that seemed unfair to the point of viciousness. And as far as I was concerned, Pop was to blame for all of it. I didn’t have it in me to ask him nicely to fix my life when he was the one who’d messed it up.
He sighed. “It will take time – if it can be done at all. There is powerful magic binding you together, powerful magic that you don’t understand and I don’t control. The enchantment won’t easily loosen its grasp. Not so you can throw your destiny away on someone so far below you.”
“Don’t make this into one of your ‘Robbin isn’t good enough for you’ speeches. He’s plenty good enough. You don’t even know him.”
A flash of something really dark crossed Pop’s face. “You are the one who doesn’t know him, Tabitha. I know things about Robbin Turnbough that would turn your hair from pitch black to snow white like that.” He snapped his fingers.
“Well, I have a great idea, Pop; why don’t you keep whatever you know about him a secret from me for like twenty years and then drop the truth on me someday when I don’t expect it?” He tried to interrupt but I plowed on over him.
“Yesterday morning I was a regular girl with a fiancé and a job at a bank and this morning I’m an elf princess with two fiancés and no control over her own life. Do you have any idea what happened at my house last night? What could have happened and very nearly did on at least two separate occasions? You don’t want to know what almost happened.”
Even I wasn’t sure what I meant by that, specifically. Quite a few things had almost happened that would have made my Pop pretty angry. My mind shot back to Alex, his mouth and hands roaming across my body. And then I thought of Robbin holding me so close to him, whispering that he loved me still. It was terrible to want them both that way.
“I can’t live like this. I won’t. You need to fix this right now. Right now before something is done that can’t be undone.”
Poor Tab. She loves Robbin, but she can’t deny the magic that’s pushing her toward Alex. As the story progresses, secrets are revealed that change the way she feels about both men. By the end it seems like she’s got it figured out but since Inbetween is the first in a three book series, and I’ve admitted that I like the chaos of a good love triangle (or love square for that matter) I wouldn’t get anything monogrammed just yet if I were her.
If you’ve read Tab Bennett and the Inbetween, I’d love to know if you’re Team Robbin or Team Alex and why. If you haven’t, stop by the comments and tell me what you think of literary love triangles in general. I know they drive some readers crazy – and not in a good way. What about you?
Thanks again, Jen. I hope you’re having a great time at AAD! Have a Hurricane (or two) for me.
Thank you Jes so much for stopping by and sharing more about love triangles and your new book. Readers… what do you think about love triangles?
You can find Jes online at:
WEBSITE
FACEBOOK
TWITTER 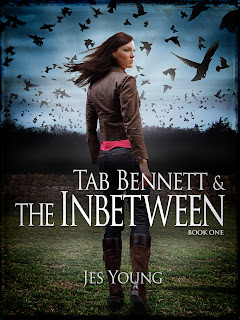 More about Tab Bennett and the Inbetween:
Release: April 30, 2012
Self-Published
Yesterday Tab Bennett was a bank teller. Today she’s at the center of a centuries old war between Light and Dark. Tomorrow – well let’s just say she’ll be lucky if she lives to see it.
Engaged to her childhood sweetheart, employed at the local bank, and finally living on her own for the first time at twenty-four years-old, Tab Bennett has no interest in a fairy tale life. She’s perfectly happy with the normal one she already has. But when her sister is murdered on a moon-dark night, revealing a world of power and magic she never dreamed existed, a fairy tale is exactly what her life becomes. Figures it would have to be the Grimm kind.
Just like that, the life she had planned is over. Instead of cashing checks and handing out lollipops, Tab is unraveling clandestine assassination plots and learning to wield the magic that is her birthright. And as if fulfilling her destiny isn’t hard enough, she’ll also have to choose between Robbin, a man who’s turned out to be a lot more complicated than the proverbial boy next door, and Alexander, the handsome prince whose smile leaves her weak-kneed and weak-willed.
Now, while Tab struggles to hold on to the human world she’s always known and understand her place in the magical one she’s just discovered, dangerous forces are gathering close to home. If she wants to live to see happily ever after, she’ll have to figure out who she can trust, who wants her dead, and why. The answers will change everything she believes about herself, the people she loves, and the place she calls home.