Hello Readers! Today I welcome author Claire Ashgrove. Claire has been writing since her early teens and maintained the hobby for twenty years before deciding to leap into the professional world. Her first contemporary novel, Seduction’s Stakes, sold to The Wild Rose Press in 2008, where she continues to write steamy, sexy stories for the Champagne and Black Rose lines. Adding to these critically acclaimed romances, Claire’s paranormal romance series, The Curse of the Templars debuted with Tor in January 2012. For those who prefer the more erotic side of romance, she also writes for Berkley Heat as the National Bestselling Author Tori St. Claire.
Claire lives in Missouri with her two toddler sons, and too-many horses, cats, and dogs. In her “free” time, she enjoys cooking, winning at Rummy, studying Ancient Civilizations, and spending quiet moments with her family, including the critters. She credits her success to her family’s constant support and endless patience.
Claire is touring with her Bound By Decency Blog Tour during the month of August. You can enter to win a $25.00 Amazon Gift Card by visiting the participating sites. Keep reading for details on this awesome giveaway. Also, keep reading for more about Claire’s newest release, Bound by Decency, and check back later today for Una’s review. 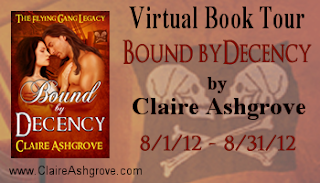 Please help me welcome Claire to That’s What I’m Talking About. Take it away Claire…
The Three Most Surprising Things About Self Publishing
Hi all!  Thanks for having me here today.  I’m so very excited to be on tour with my debut historical, Bound by Decency.  As you know, this is an independent venture.  And while I researched independent publishing for a long while before dipping my toes in the water, there were still some things that I didn’t anticipate.
The Fear
I used to get nervous about querying agents.  I used to be uncomfortable letting published authors read my work.  I used to forego eating before pitching to editors, and would sit on pins and needles while my agent waited for an editor’s response.  Let me tell you… nothing compares to sending out that 1st book that isn’t backed by a traditional house.  Sending it to my peers most especially made me quake in fear.  I shook in my proverbial boots when authors I look up to and admired agreed to read.  I bit my nails into dust when I submitted it for reviews.  This has been the most terrifying thing I’ve ever done.
The Time
I budgeted well ahead of my projected release date to accommodate last minute issues that might pop up.  In fact, I began working on this at the end of April.  Plenty of time until August 1, right? Particularly given that at April 1, the book had already been edited.  Still, the sheer amount of time involved from that point forward amazed me.  Days, not hours, to format.  Picking out fonts, picking new fonts when the first wouldn’t work.  Artist back and forth.  More formatting  Setting up merchant accounts – shew!  Word of advice:  plan an extra 30 days just to accommodate the technical necessities.
The Excitement
This is my 16th published novel or novella.  My 16th release date.  I’ve been through this process before, and while there’s a certain amount of excitement with each release, this was different.  The whole project is my vision.  No art department gave me a cover based on a marketing team’s thoughts.  The editorial remarks didn’t involve “house standards or expectations”.  The whole damn thing is mine!  And the excitement of every step is so incredible.  It’s like I’m a baby author all over again, getting behind my very first book!
I hope you’ll share that excitement with me and let Cain, Drake, Nightshade, and Royce into your hearts this month.
Thank you Claire so much for stopping by and sharing your experiences with self-publishing.
You can find Claire online at:
WEBSITE
BLOG
FACEBOOK
TWITTER
More about Bound by Decency:
Release: August 1, 2012
Self-Published
After inheriting a portion of Spain’s Royal Inheritance, Cain left The Flying Gang for a chance at honest wealth. With the secrets of his piracy tucked away, he achieved his lofty aspirations. But when his partner and best friend betrays him to the Royal Navy, Cain’s dreams are ripped to shreds. He’s left with his ship, the tattered remnants of a stolen future, and a piece of Spanish mystery. Wanted by three nations and destined for the gallows, he returns to the legendary band of buccaneers for one purpose — vengeance.
Kidnapped by the formidable Cain, India Prescott discovers he intends to kill the man she’s to marry. Cain’s story reveals betrayal. Treachery that extends to her as well. Although she holds the key to retribution, India refuses to become another man’s pawn. Freedom lies before her, the liberty to shrug off propriety, make her own decisions, and claim her destiny. But when she uncovers goodness in Cain’s soul and he awakens passion in her heart, she must combat the chains of convention once more.
Only this time India’s not fighting society. She’s battling a pirate bent on keeping her decency intact. An excerpt…
India refused to be swayed. She’d found freedom. She wasn’t about to let it slip through her hands because of a little danger. Life was meant to be lived, not treated like a sickly child. “Then come with me. You’ll keep me safe. Teach me how to defend myself, if you must. But I’m going down there, with or without you.”
Cain opened his mouth to speak, spluttered something unintelligible, then quickly snapped it shut. Clearly, he had expected her to listen to reason and take refuge from the scourge within a taxi. As he struggled to recover his tongue, she fought back a giggle. She’d won. She had actually won a round with Cain.
“Absolutely not.”
Or perhaps she’d lost. Dismay settled into her veins, weighing down her heart. She pulled her hand free of his arm and turned to gaze at the shore in longing. They didn’t fear a stroll down the streets. What made those women so different than she? The fact they couldn’t size their clothes correctly, or that they opened their legs for coin?
She stiffened her chin, stalked to the rail, and swung a leg over to catch the ladder dangling off the bow. “This taxicab—where shall I find it?”
“I’ll hail one when we reach the end of the dock.”
“No. I’m afraid you don’t understand. I’m going to walk, Cain.” With that she disembarked.
In seconds, his feet appeared on the rope rungs above her head. He glanced over his shoulder, looking down at her. “What in the name of the seven hells do you think you’re doing?”
India shimmied down the last three rungs, and her toes touched the wet wooden dock. She dusted her hands on her trousers, then flashed him a broad grin. “Seeing the things I want to see.” Turning, she took four steps toward the fray of people.
He hit the dock with a thud. “India!”
GIVEAWAY DETAILS:
Learn fun and exciting things not only about Claire’s debut historical, but about pirates as well! Ever want to know what’s on a pirate menu?  Or what superstitions guided those sexy sailors of old?  How about the truth behind The Flying Gang? Learn the answers to these questions and more on the Bound By Decency Blog Tour.
Stop in on the participating blogs and leave a comment to be entered to win a $25.00 Amazon Gift Certificate at the close of the tour.  The more you comment, the better your chances of winning! Details for the tour and where to visit are HERE.

One response to “Bound By Decency Blog Tour with Claire Ashgrove”