Full Blooded
Author: Amanda Carlson
Release Date: Sept. 11, 2012
Publisher: Orbit
Jessica McClain #1
ISBN: #978-0316205207
Genre: Urban Fantasy
Format(s): paperback (352 p), e-book
Book Source: Author
About the book:
Born the only female in an all male race, Jessica McClain isn’t just different—she’s feared.
After living under the radar for the last twenty-six years, Jessica is thrust unexpectedly into her first change, a full ten years late. She wakes up and finds she’s in the middle of a storm. Now that she’s become the only female full-blooded werewolf in town, the supernatural world is already clamoring to take a bite out of her and her new Pack must rise up and protect her.
But not everyone is on board. The werewolf Rights of Laws is missing text and the superstitious werewolves think that Jessica means an end to their race. It doesn’t help when Jessica begins to realize she’s more. She can change partway and hold her form, and speak directly to her wolf. But the biggest complication by far is that her alpha father can’t control her like he can the rest of his wolves.
When a mercenary who’s been hired by the vampires shows up to extract information about the newly turned werewolf only days after her change, they find themselves smack in the middle of a war and there’s no choice but to run together. When it’s up to Jessica to negotiate her release against her father’s direct orders, she chooses to take an offer for help instead. In exchange, Jessica must now swear an oath she may end up repaying with her life.
What I’m talking about:
Our story opens with a huge proverbial BANG, and may I add a big surprise to me, when our heroine, Jessica McClain begins to shift into a wolf. For those that read the novella, Blooded, it may be a bit of a shock to find out that Jessica is now 26 years old and has been living away from the Pack since the end of the novella (when she was 19 years old). Oh, and that the once human girl is now the only female wolf shifter in existence. Many of the questions I had after reading the novella disappeared by the end of the first chapter! Personally, I really liked the idea that she was “only a human” among the supernaturals; however, I quickly adapted my mindset and found Jessica’s new situation equally as compelling.
Jessica’s unexpected shift causes major damage to her apartment, so friends are called in to make it look like a break in. Unfortunately, they couldn’t take care of everything, and the police are a little suspicious about what really happened. To further her problems, Ray Hart, the police officer handling her “break in,” has a long-standing personal grudge against Jessica. He dogs her relentlessly, poking holes in her alibis and functioning as a major pain-in-the-ass.
With Jessica now a full-blooded werewolf, her father, the Pack Alpha, must decide how to hide Jessica from the Supernatural community for fear she will be hunted and destroyed. Unfortunately, word got out quickly that she shifted, and there are some powerful beings tracking her down. When her true nature is revealed, sides are drawn, and the Pack will never be the same. 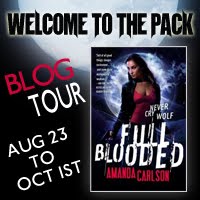 Full Blooded is a busy book. The first part starts with Jessica’s unexpected transformation, and the subsequent focus on how to keep her cover as a human (and deal with Ray). Since shifting is new to Jessica, we learn more about the wolves and Pack as it is explained to her by her father, brother and other shifters. The world-building is fairly intense, but easy to follow. However, sometimes, the discussions felt forced or knowingly a setup for later storylines. I use the example of a discussion Jessica has with her father’s second, James, on true mates. The conversation felt out of place to me, like I was being set up for something that would happen later. And sure enough… that’s what happened.
Speaking of James… I really liked his character – he has a level head and protected and supported Jessica within the Pack. To me, James was painted to be like a second father for Jessica. So when their wolfy-hormones go all crazy and the pair end up “releasing pent up energy,” it was a bit weird for me. It wasn’t off-putting, but it wasn’t hot either.
On the other hand, I did not care for Ray. His character felt a bit cliché. We’ve seen his type often… Around just to be a pain in the butt, but not add real substance. Then, midway through the story, he’s out of the picture until the end of the book. I hope there is more to him then a tough guy out to get even because a girl took his glory. The verdict is out until the next book, Hot Blooded.
At about the midpoint of Full Blooded, the story takes on a different feel. This is when Jessica meets the mysterious Rourke. A ruthless mercenary, Rourke has been hired to find out more about Jessica. However, once he moves in to gather information, all hell breaks loose: the Pack goes to war and rogue shifters attempt to either kidnap and/or kill Jessica. Jessica’s father and James entrust her life to Rourke, and the pair barely escape. The second half of the book focuses on the pair’s journey to stay safe, their growing attraction to each other, and with confronting the powers behind Jessica’s attempted abduction.
Now Rourke is a hero I can get behind! He is tough and alpha, yet  protective of what’s his. And he knows that Jessica is his. Once he realizes that Jessica isn’t the enemy, it’s like he knows he never wants to be without her. The couple had some swoon-worthy moments, and my favorite line comes from one of their interactions:

His eyes met mine and my heart leapt into my throat. Warrior of Old. Without a doubt, it was true. What was he? “What are you?” I breathed.

He looked at me curiously and I realized he was seeing me for the first time in my Lycan form. Surprise crept along his features, but we didn’t have time to discuss it. “I’m yours,” he said simply.

Although I adored him, Roarke’s emotional transformation from tough guy to softy was a bit sudden and felt extreme.
Overall, I was completely engrossed in Full Blooded, and honestly, I could not put down the book. Although there were a few things that irritated me, like the fact that there was entirely way too much taunting by almost every character in the book, I felt the overall storyline and premise outshone the bothersome annoyances. I’m not a huge fan of open-ended conclusions (which this book has), but there is a plan in place which should make for an thrilling second story. I truly enjoyed Full Blooded and cannot wait to read the next book!
My Rating:

Reviews in the Series:
Blooded: A Jessica McClain Novella