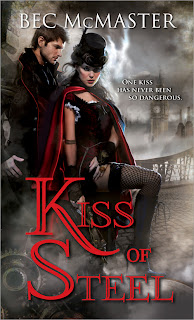 Kiss of Steel
Author: Bec McMaster
Release Date: Sept. 1, 2012
Publisher: Sourcebooks
London Steampunk #1
ISBN: #978-1402270277
Genre: Paranormal Romance, Historical, Steampunk
Format(s): Paperback (448 pgs), e-book
Book Source: Publisher
About the book:
He craves her like no other…
Honoria Todd has no choice. Only in the dreaded Whitechapel district can she escape the long reach of the Duke of Vickers. But seeking refuge there will put her straight into the hands of Blade, legendary master of the rookeries. No one would dare cross him, but what price would he demand to keep her safe?
Ever since Vickers infected him with the craving, Blade has been quicker, stronger, almost immortal—and terrified of losing control of the monster within. Honoria could be his perfect revenge against the duke…or the salvation he never dared to dream of.
What I’m talking about:
Kiss of Steel starts the reader off in the middle of Honoria Todd’s meager life. It is evident right from the get go that Honoria and her family were living a good life just a mere six months ago, but now they must scrape to make ends meet. She is slowly starving herself to death from malnutrition, she lies to hide the fact that she’s living in the slums just so she can keep her job, and her younger brother is very ill. In addition, there is a magnificent bounty on her head, so she must hide her family from those who would turn her in for cash. But all of her hard work didn’t keep her from the notice of Blade, the protector of the rookery and provider for the slums. So when Honoria’s life takes another turn for the worst, she must turn to Blade, and sell her body for blood to make ends meet.
Honoria and Blade are both interesting characters. I enjoyed watching them learn to deal with their lot in life, fighting against stereotypes and falling in love. Their chemistry was fairly hot, at times sensual and at others combative and humorous. Both are strong willed and put others (family) above their own individual needs. I enjoyed how they worked together, and I was entertained by their interchanges and discussions. By the end of Kiss of Steel, the pair had compiled and integrated a good size cast of characters that bodes well for books to come.
One of the things I really liked and disliked about Ms. McMaster’s storytelling is that she relates the events and tales as if the reader has intimate knowledge of her world. There are no side explanations of her lexicon or creations. The reader must figure out the world by piecing together bits of information and inferring their meanings and importance from dialogue. It makes the story flow faster, but it did make understanding everything a bit difficult at first.  For example, we find out that Blade is a rogue “blue blood,” and Honoria’s brother suffers from the “craving virus.” We aren’t really told what these things are, but based on circumstance I guessed maybe a “vampire.” However, although the blue bloods drink blood, they are not vampires. It took a while to figure this out, but it mostly did not detract from the enjoyment of the story. However, there were certain times that I did get frustrated and wished I better understood.
At one point in the story, Ms. McMaster uses her characters to retell the history of the craving virus, which was used by only the upper class and royalty. Although it started in the far East, it eventually spread across Europe. In some countries, there were uprisings, and the “blue bloods” were eliminated. However, in England, the Echelon keep a tight fist over those who receive the virus and suppress the masses to keep them in line. Blade is a rogue blue blood, one not born into the Echelon, and escaped their tyranny. He now protects his district, but his name inspires fear to those outside the slums.
One key aspect of the craving virus is that after about 50-75 years (my guess based on this book), an infected blood blue loses control over the blood cravings and turns into a mindless vampire.  In order to prevent these killing machines from existing, blue bloods are monitored and their lives ended if they get too close to the Fade (transitioning to vampire). In Kiss of Steel, there is a rogue vampire loose in the slums, and Blade must work with the Echelon to find it. The mystery of where the vampire came from is an interesting one, giving the tale an edge of suspense. And adding to the tension, is Honoria’s attempts to find a cure for her brother before he is discovered.
I would like to mention that I feel this book is primarily a paranormal romance with a historical setting. The steampunk aspect is very minimal, with little detail about any mechanisms or contraptions. The steampunk is more of an afterthought and not the primary aspect of the setting or storyline.
Overall I have to say I really enjoyed this story. Although I felt there were some inconsistencies in Blade’s character, and I longed for more details at times, the tale kept my interest, and I became invested in the characters. A few open-ended items such as the political ramifications of the ending and the desire to find out more about the side characters and the craving virus, vampires, blue bloods, etc., have me looking forward to reading the second story.
My Rating:

ENTER TO WIN! Fill out the Rafflecopter form for a chance to win the book. For more details, see my interview with Bec McMaster, HERE.

6 responses to “Review & Giveaway: Kiss of Steel by Bec McMaster”