Hello Readers! Today I bring you science fiction/romance writer, Sharon Lynn Fisher. Sharon is the author of GHOST PLANET, recently published by Tor Books on Oct. 30, 2012. The book — a two-time RWA Golden Heart finalist — is a sci-fi/romance blend that offers a “fresh and fascinating take on the human-alien problem” (says author Linnea Sinclair).
Sharon lives in the Pacific Northwest, where she is hard at work on her next novel and battles writerly angst with baked goods, Irish tea, and champagne. You can visit her online at SharonLynnFisher.com.
Sharon is here today to share a little about Ghost Planet. Keep reading to learn more about Ghost Planet and enter to win a copy! GIVEAWAY details are below.
Please help me welcome Sharon to That’s What I’m Talking About.
Balancing Romance and Sci-Fi in GHOST PLANET 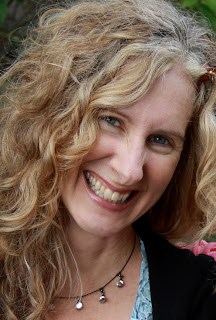 Nima’s review of GHOST PLANET (HERE) talked about how relationships always drive a story, and I’d have to agree with her about that. When I think of some of my favorite novels – A WRINKLE IN TIME, WATERSHIP DOWN, JANE EYRE, LORD OF THE RINGS – a sense of the characters’ relationships to each other are more vivid in my mind than the individual characters.
In WRINKLE, for example, as an adolescent I was really drawn to the strong bonds among the members of the Murry family. In fact the action of the story begins when the mother and children go dimension hopping to rescue the father.
This is especially true for romances, where the story would not work without a relationship at its core. My recently released science fiction romance GHOST PLANET is strongly driven by relationships from both the romance and sci-fi perspectives.
In the first chapter of the book, the heroine (Elizabeth) discovers she’s bound to the charming and sexy Irishman (Murphy) who was to be her supervisor. They are virtual strangers, and moreover he is required by a protocol he created to ignore her, so her top priority is to detach from him.
By degrees it becomes clear this is not going to be as easy as she’d hoped. And it may not be in her best interests, or the planet’s.
Elizabeth’s desperation to detach, and Murphy’s growing intellectual and romantic attachment to her, drive them to work together to understand the mysterious nature of her existence. It’s only then that they make real progress in unlocking the planet’s secrets (violently rocking the status quo in the process).
So GHOST PLANET is really driven by relationships on three levels – the professional relationship and romance between Elizabeth and Murphy, the overall state of ghost/colonist relationships on the planet, and how the symbiotic connections between these pairs impacts the planet itself — ecology, climate, and even geological stability.
In that way GHOST PLANET became exactly the book I’d always wanted to write: One half romance, one half wonder, mystery, and adventure. And that’s exactly what draws me to science fiction romance – the opportunity to explore relationship dynamics against the backdrop of a speculative setting.
Romance has the idea of a soul mate. In GHOST PLANET, science fiction allowed me to take that concept one step further.
What are some of your favorite relationship-driven stories?
Thank you, Sharon for stopping by. It was a pleasure to chat with you! Keep reading for GIVEAWAY details!
You can find Sharon on line at
Her Website
Twitter
Facebook
Goodreads 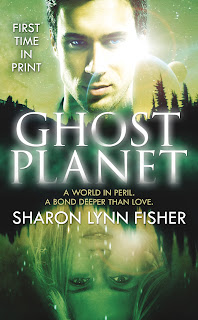 More on Ghost Planet (October 30, 2012):
When psychologist Elizabeth Cole arrives on a recently colonized planet to start a new job, she doesn’t expect to find her supervisor, Murphy, so incredibly attractive. She doesn’t expect to see alien beings, native to the planet, materializing as ghosts and following the “colonist” humans around. Most of all, she doesn’t expect to learn that Elizabeth Cole in fact died in a crash en route to this planet, and that she herself a reincarnated ghost-alien, connected symbiotically to Murphy—who, bound by the “Ghost Protocol” that he himself created, is not allowed to interact with or acknowledge Elizabeth in any way.
Confused, alone, and discounted as less than human, Elizabeth works to unlock the secrets of her own existence and fight the blatant discrimination of the Ghost Protocol. But as she draws closer to the truth, she begins to realize that she is only a pawn in the struggle for control of the planet. Oppressed by her ghost status and tantalized by forbidden love, Elizabeth may just be the one to upset the planetary balance….
GIVEAWAY Thank you, Sharon, for stopping by That’s What I’m Talking About.  Sharon and Tor Books are graciously giving away three (3) copies of Ghost Planet. To be entered, please use the RAFFLECOPTER form below. As part of your entry, please leave a comment answering Sharon’s question: What are some of your favorite relationship-driven stories? You do not need to be a google friends connect follower of my blog, but it is always appreciated. Contest is open from November 8, 2012 until Wednesday November 14, 2012 at 12:01 AM EST. Contest is restricted to US and Canadian mailing addresses only. Three (3) winners will be selected from eligible entries. I am not responsible for items lost in the mail. If you have problems with the RAFFLECOPTER form, please email me at twimom227 (at) gmail (dot) com.