Here we are at the close of another year. This year my goal was to focus more on reading and less on the mechanics of blogging, and I’m happy to report it was a success! Emotionally and mental I was in a much better place, finding time to read and enjoying writing the reviews. I am happy to report that the total number of books read this year was 97 books, up 33 books from last year! My original goal was to read one book per week, but up’d the goal to 65 books (one more than 2011). I blew that goal out of the water!
I had also challenged myself to read new-to-me authors this past year. Originally, I thought about one new author per month, for a total of 12 in the year, but when I realized I would exceed that rather quickly, I up’d that goal to 24 new-to-me-authors. I ended up reading 30 new-to-me authors! I am really proud of this accomplishment and plan to try and get at least 12 more new-to-me authors in 2013.
Having the more relaxed mental attitude also helped with blogging. I am pleased to report that I published over 460 posts in 2012, up over 100 from 2011! My review team kept me busy! We added a new feature in late September called Saturday Conversations, a place where we take the time to chat about the things going on in our lives. On the downside, I finally said goodbye (for now) to my long-running Sunday Snippets weekly post back in October 2012, after the 124th post!

I really have enjoyed blogging and discussing books with all of you. Although visitors were down in 2012, I know I have a great group of loyal readers, and I thank you each of you from the bottom of my heart. My blog is a labor of love, and I’m happy to share it with you all! Below is my TOP TEN for 2012… How did 2012 go for you? What were your favorite reads during the year?
10) My friend and sometime guest reviewer, Ang, came on board as a permanent member of the That’s What I’m Talking About review team. Ang enjoys reading historicals and contemporaries – creating a better balance of romance here at the blog.
9) I enjoy doing giveaways here at That’s What I’m Talking About, and the discovery of Rafflecopter has made giveaways so much easier for me! I love that it manages the entries and picks the winner/s for me, but I also enjoy all of the options, like tweeting about the giveaway.
8) Did anyone else notice the increase in Self-Published Authors this past year? I had the opportunity to read and showcase both newbie authors, but also some of my long-time favorites went the route of self-publishing in 2012. Whether by choice or due to circumstances, the decision to self-publish was a-okay with me. I enjoyed books from Shiloh Walker, Carolyn Crane, Jill Myles and Allyson James – all self-published. And this trend to self-publish was at the center of a question I asked at the Lori Foster’s Reader-Author Get Together, bringing a true cricket moment, but many laughs for my friend Dren and myself!

7) It seems that every year there is at least one big book in a long-running series, one that everyone can’t wait to read (can anyone say Qhuay 2013?!). In 2012, there were two such books for me. First was the climatic conclusion to the (first story arc of) Midnight Breed series by Lara Adrian, and a book for the long-tormented hero, Chase. We finally got to read his book, Darker After Midnight, and it did NOT disappoint! Not only did the book chronicle Chase’s journey of redemption and love, it also ended with an amazing twist that will completely reboot the series when it returns in February 2013.
2012 also was the year that Paris finally finds love in The Lords of the Underworld! Gena Showalter’s keeper of Promiscuity, Paris, has been pining for Sienna since the beginning of the series, and in The Darkest Seduction, Paris finally finds peace.
6) Reading so many New-to-Me Authors in 2012 was not only a huge accomplishment, but also such a joy. I found some great new series that have now become “auto-buys” for me. As I mentioned earlier, I hope to continue adding new authors to my bookshelf, but I won’t do it at the expense of giving up books and series I currently read. I think I will be able to squeeze in a few more – because that’s the best way to discover new favorites!!

5) URBAN FANTASY! When I look back at 2012, I realize that I have been reading a lot more urban fantasy titles and really enjoying them (even a bit more than PNR!). My favorites are ones that have a strong heroine, who may be flawed but believes in herself and those around her, coupled with some romance. Long-time favorites like Kate Daniels (and her partner Andrea, who was the main character in one of my favorite books, Gunmetal Magic), Janet Begay (Stormwalker series), Victory Vaughn (Deadtown series) and Madeline Black (Black Wings series), were joined this year by new-to-me characters like Gin Blanco (Elemental Assassins), Kit Colbana (Colbana Files), Drusilla Jaco (Sentinels of New Orleans), and Justine Jones (The Disillusionists).
4) In 2012, I said good-bye to three of my “auto-buy” series. First, Jill Myles ended her wonderful Succubus Diaries series with Succubi Are Forever in April. In November, Larissa Ione released the fourth and final book in her sexy Lords of Deliverance series. Rogue Rider may have the final chapter for the Horsemen, but the world of Demonica will live on when she returns to UGH in 2013 with Reaver’s book! Finally, December saw the final book Alyssa Day’s Warriors of Poseidon series. Long-time readers FINALLY got Alaric and Quinn’s story in Heart of Atlantis.

3) I finally made time to read The Disillusionist series by Carolyn Crane. What. An. Amazing. Series. I cannot not say enough great things about this trilogy which centers around a group of misfits who learn to use their phobias and insecurities to “cure” true bad guys of their vices. The third book in the series, Head Rush, was one of the best books I read this past year and earned a spot as one of my all-time favorites!

2) It is hard to pick a favorite book for 2012… There were several great reads that came out this past year. My top 3 new releases for 2012 are: Riveted by Meljean Brook, Gunmetal Magic by Ilona Andrews, and Darker After Midnight by Lara Adrian.
1) Getting to hang out with some of the most wonderful women and fellow book lovers at both Lori Foster’s Get Together and Authors After Dark NOLA. Not only did I have to opportunity to check in with some of the friends I’d met in 2011, but I finally got to meet in real life several more of my online tweeps. Plus – meeting and hanging out with some amazing authors. I think I went a bit fangirl several times. Connecting with gracious people and making friends with those I have something in common is truly a blessing! I look forward to doing more of the same in 2013! 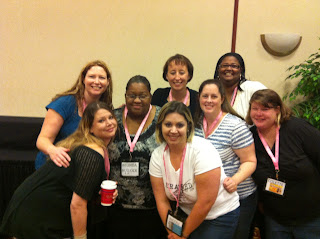 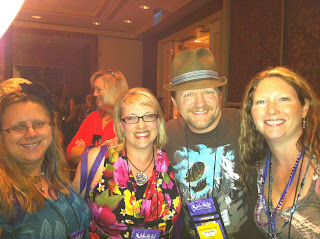 Thank you all for stopping by and supporting me and That’s What I’m Talking About.  Joyous New Year and Happy Reading!! Be sure to check back in January when I’m planning a HUGE book giveaway blow out for my 3rd Blogiversary!