Hello Readers! Today I bring you author Loribelle Hunt. Loribelle is a former Army MP who traded in her combat boots for motherhood, flip-flops and all the Diet Coke she can drink. (She almost misses the combat boots.) She’s the author of more than twenty books, none of which her children are allowed to read. Ever. Visit her website, www.loribellehunt.com, or Facebook,  www.facebook.com/loribelle.hunt, for information on new releases.
In celebration of her upcoming title, Warrior (Feb 5, 2013, Samhain Publishing), Loribelle is here to talk about what inspires new ideas. In addition, Loribelle is hosting a GIVEAWAY of anyone of her titles, including Warrior (details below). Please help me welcome Loribelle to That’s What I’m Talking About.
Inspiring New Ideas
Hey y’all! Thanks for letting me visit today! 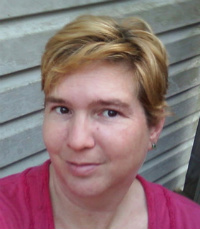 I love playing with what if scenarios. This is the way I come up with most of my new ideas and The Elect series was no different. I wanted to stay away from shapeshifters for this one, and I didn’t want to try to come up with a new vampire idea. That just left humans, so I wondered what I could do to make them different.
What could I throw at them to make them something more than an average person down the block? Make them more than human? I liked the possibilities. Would they be human with extrasensory talents or something else entirely? What would make them different? I loved the idea having a new species, evolved from humans, living in our midst. How would a new species ensure its survival? I figure they’d have two choices basically. Secrecy or aggression.
In my new series, The Elect have opted for secrecy. They look and sound human, have the same feelings and desires, but that is where the similarities end. The Elect are stronger, faster, and smarter with the instincts of a predator, as if nature knew they’d have a tough fight for survival. (Never mind that fits my obsession with writing alpha males so well lol!) But the Elect have cooler tricks up their sleeves. What’s the point of making up a new species if they don’t have nifty powers to go with them? So far I’ve written characters with telepathy, telekinesis, a truth reader, and a fire starter (well, technically she’s human). They were a lot of fun and I can’t wait to write more.
Thanks for sharing with us today, Loribelle! Here’s more about Loribelle’s upcoming book…
Warrior: The Elect Series Book 3
Samhain Publishing
February 5, 2013 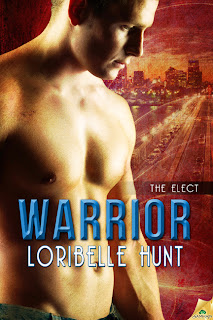 Years ago, former Special Ops officer Carter Owens made the biggest mistake of his life. He met the woman of his dreams—and didn’t fight to keep her. Now that he’s learned Jamie Wade is still alive, and that she bore him a son, Carter plans to protect his family at all costs. Right after he’s rescued her along with several other Elect members being held prisoner in a private hospital.
He isn’t prepared to find her battered, drugged-up, and half-starved. Whatever her captor wanted, the madman hadn’t gone after it humanely.
When Jamie awakens, she’s stunned to find herself free of the abuser who tried and failed to make her admit she’s a telepath. As a police detective, she is driven to join the investigation into the organization that held her and her son captive. But first she’ll have to overcome Carter’s overprotective nature.
Which isn’t going to happen anytime soon, because first she has to recover—and convince him that their out-of-control sexual chemistry isn’t a good enough reason to stay.
You can find Loribelle online …
Website
GoodReads
Twitter
Facebook
And now for the GIVEAWAY…
The winner will receive an ebook version of Warrior or any book from Loribelle’s backlist. To be entered, please use the RAFFLECOPTER form below. As part of the entry, leave a comment telling me what type of paranormal is your favorite to read (shifters, vamps, angels/demons, superhumans, etc.). You do not need to be a google friends connect follower of my blog, but it is always appreciated. Contest is open from January 25, 2013 until Thursday January 31, 2013 at 12:00 AM EST. One entry per person. Contest is open to all, except where prohibited by law. One (1) winner will be selected from eligible entries. I am not responsible for items lost in the mail. If you have problems with the RAFFLECOPTER form, please email me at twimom227 (at) gmail (dot) com.