Hello Readers! Today I bring you author KT Grant. KT is a self-proclaimed eccentric redhead who not only loves to read a wide variety of romances, but also loves writing it. Under her alter-ego, she is a well-known book reviewer and blogger who doesn’t shy away from voicing her opinion. A proud native of New Jersey, KT is multi-published and known for writing “out of the box” romances. KT has been mentioned in the Guardian.UK, Publisher’s Weekly’s Beyond the Book and at Bookseller.com. KT is a top ten best-selling author at Amazon, as well as being a multiple All Romance Ebooks best seller and a Night Owl Reviews Top Author Pick.
KT is here today to share an exclusive excerpt of her upcoming lesbian paranormal romance, Sharp Bite of Pleasure (Book #1 in the Pleasure Bite series). Coming from Lyrical Press (http://lyricalpress.com/) on June 3, 2013. Please help me welcome KT to That’s What I’m Talking About. 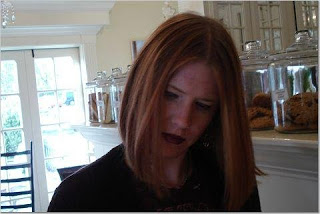 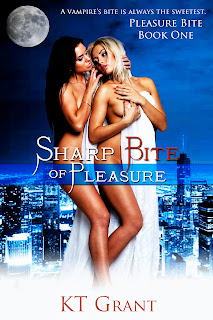 “He didn’t kill himself!”
She had never heard such an emotional outburst from Alexa before, even when they were intimate with one another. Alexa stepped toward her again. She retreated and landed up against the wooden railing of the gazebo. “The newspapers announced his death after they were sent an official statement. There’s been nonstop talk, rumors…discussions on television and on the blogs.”
“Stupid modern technology,” Alexa muttered, sliding in closer.
Riddled with tension, Penny dug her nails in the railing, observing Alexa carefully. “Don’t tell me you’re surprised by gossip about your family in the media. It’s been like that for years.” She counted herself lucky the gossip rags had never got wind of their relationship.
The only noticeable reaction from Alexa was the small strain lines around her mouth. They vanished as soon as they materialized and she was back to being cold and aloof. Penny snorted. How did I ever fall for this woman in the first place and allow her complete access to my body?
Alexa’s smile made Penny’s stomach contract.
“Now you’re thinking about the times we made love,” Alexa said in an assured voice.
Penny bolted to the center of the gazebo as Alexa slowly stalked her. She’s still upset about her father. Must be the reason she changed the conversation at the drop of a hat. “Your intuition is not what it used to be. I must have been crazy to have a fling with you in the first place.”
Her statement came out harsher than she’d intended and it hit home. Alexa’s cheek twitched and she eyed Penny in stony silence, licking her lips.
Penny’s inner thighs quivered. Shit. Alexa would pick up on it.
“For all your cutting, juvenile remarks, and acting like you’re not attracted to me, your scent tells me the opposite.”
She crossed her arms and widened her stance. “Childish?” She purposely ignored the mention of her arousal. Damn the vamp and her keen sense of smell!
“Yes, you’re acting like a bad-tempered child.” Alexa crossed her arms to mimic her.
Penny longed to stamp her foot in annoyance but didn’t. “You’re such a wise-ass. Some things never change.”
“I agree with you there. We’ve come full circle. Do you remember the first time I caught you? I do. From the moment I saw you at the street fair in Three Points, I wanted you and nothing was going to stop me from taking you.”
Penny remembered all too well. She’d been so scared when the vampire king’s daughter approached her on the street and invited her to spend the night with her at one of the most expensive hotels in Vila Pluvia. She’d politely refused and ran away, searching for her brothers for protection. But Alexa had caught up with her and pushed her into a side alley against a wall and gave her a kiss, her first from a woman. When Alexa got down on her knees and gave her an orgasm with her talented mouth, regardless of being in public, Penny changed her mind and welcomed anything Alexa wanted to do to her. She ended up spending the night and early morning hours rolling around on silk sheets with the seductive, aggressive vamp. Over the course of the next two years, she and Alexa had been together every chance they could get. The majority of their time spent together was them biting and kissing…sucking on one another…
She blinked, coming out of her recollection. Alexa stood less than a foot away. Penny licked her lips this time. Alexa’s mouth fell open and the edge of her fangs peeked out.
Penny’s knees locked together.
———–
Thank you so much, KT, for stopping by and sharing a little of your upcoming release with us today!
You can find KT online …
Website www.ktgrant.com
Blog http://kbgbabbles.blogspot.com/
Twitter https://twitter.com/katiebabs
Facebook https://www.facebook.com/kt.grant.9