Make Believe
Authors: J.A. Belfield, Terri Rochenski, J. Keller Ford, Lynda R. Young, Kelly Said, Jennifer M. Eaton
Release Date: Nov. 23, 2012
Publisher: J. Taylor Publishing
Genre: Fantasy/ Science-Fiction/ Paranormal Romance
Format(s): e-book
Book Source: Publisher/Author
Sacrificial Oath by Terri Rochenski
Summary:  An impetuous act unwittingly makes Alesuela the fulfillment of the Sovereign’s Blood Oath to their Goddess. In five days, she’ll be forced to make the greatest choice of her life: become the virginal sacrifice already promised, or force the man she loves most to die in her place.
With an impossible choice in front of her, she searches for ways to undo the oath, and in her quest, finds not everything in her life is as she expects.
VampBard’s Take:  I completely fell in love with Alesuela, our main character.  This fantasy story, while well-devloped and properly resolved, was entirely too short.  Ms. Rochenski created characters, settings and a world that were crafted in a manner that allowed the reader to make significant connections.  We had Man v. Man, Man v. Nature, and Man v. Self conflict, all in this whirlwind of a short story that leaves me, as a reader, begging for more.
5 stars: Personal favorite – a must read (A+)
The Amulet of Ormisez, J. Keller Ford
Summary:  There is only one way to save Elton Fletcher’s brother from an insanity-ridden death.
After years away from home, fighting for his people, Elton returns to discover his only sibling, Cayden, possessed by greed and malice, and responsible for malicious, unthinkable deeds. Cayden, though, isn’t the only one afflicted by the Amulet of Ormisez, and Elton finds himself in yet another battle, where the price of failure could be his own life.
VampBard’s Take:  Again, LOVED this story!  At the conclusion, I was left wanting more of the adventures that Felicity and Elton would take in the future.  I adored the magic, and the use of the selkies.  Shh.  If a story mentions anything about lore in which I’m familiar or obsessive, it’ll get and retain my attention, no matter what.  Elton was the classic hero in this fantasy tale.  Although it was evident from the beginning that Cayden was evil at present, I was unsure as to whether Elton would be the true hero or not!  Felicity, bravely looking after her mistress, became the ultimate heroine at the end of the story.  EXCELLENT story, with room in the plot for something MUCH longer!
5 stars:  Personal favorite – a must read (A+)
Birthright, Lynda R. Young
Summary:  Christa can mask the pain and hide the scars, but running from a birthright is impossible.
She’s tried to escape her grief by fleeing to a small town in Florida. Much to her frustration, the locals think they recognize her even though she’s never been there before. To make things worse, a man named Jack spouts outrageous theories about her.
Both spur Christa to bolt, to start fresh yet again, but there’s something about Jack that intrigues her enough to stay. The only problem? Someone else wants her to leave, and they won’t stop until she’s dead.
VampBard’s Take:  Um.  How did all of these fabulous stories make it into one anthology?  Birthright sucked me into the awesome paranormal-tale-with-romantic-elements world created by the author.  I’m still not sure exactly **what** Christa is.  Witch?  Some other paranormal being that draws on the power of the Earth?  All the discussion of destiny and the ‘returning home to spawn’ kinda creeped me out in a fabulously indulgent way.  Over-all, this story really wasn’t predictable, and I – once again – was left wanting more More MORE!
5 stars:  Personal favorite – a must read (A+)
Petrified, Kelly Said
Summary:  A mysterious storm has replaced summer with winter, devastating crops and smothering Castle lands in snow. Prince Sterling August stands alone as a leader, lost in personal grief as well as a desire to help his people but with an inability to do either.
The answers he needs await him, but without Lochlyn, a woman who’s just as isolated as Sterling, he’ll never see what stands before him, cloaked in illusion.
VampBard’s Take:  Petrified was a nice story.  I liked it, but it didn’t have that pull the other stories (thus far) have had for me.  I did really like Lochlyn, the Wiccae… but I have a thing for nature-lovers.  I’m a hippie at heart.  Sterling was a good hero, but I didn’t feel the connection to him like I’ve felt with others.  I couldn’t FEEL his pain, and the torture he was enduring because of his father’s condition.  In all actuality, when there was a secret revealed near the end of this paranormal story, I was ‘meh’ about it.
The writing was wonderfully executed, with a great vocabulary and usage that was completely up my alley, but I just wasn’t feeling it. 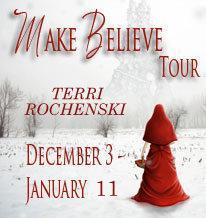 3.5 stars: Liked it a lot – recommend (B+)
Last Winter Red, Jennifer M. Eaton
Summary:  Emily is a Red, a woman whose sole purpose in life is to produce offspring. When her husband dies and leaves her childless, she risks her life and forsakes the safety of Terra—a disease-free city born after the nuclear holocaust. Beyond its boundaries, she knows, survives a man with whom she can be properly paired.
The Outside, though, holds secrets the government struggles to keep, and what Emily discovers on her quest for a mate will change her life forever.
VampBard’s Take:  I must say, this was a quaint little sci-fi story!  The complexity of the many layers of the plot – starting with the settings – brought a sense of camaraderie to Emily.  I really, really liked her.  I want to SEE her have a HEA.  There were aspects of the story that were uncomfortable for me, and that’s OK.  I do want to read more, and I hope that someday I find out that Emily and Paul had a HEA, and Sara grew up to find a Prince of her own.
4 stars: Enjoyed – strongly recommend (A-)
Escort to Insanity, J.A. Belfield
Summary:  From a charity auction, to a stroll in the park, to the craziest night of her life. Nicole Harrington can’t help but wonder how a simple event went so drastically wrong.
Of course, the male escort she booked is wholly to blame. Not only charming but shrewdly intelligent, Benjamin Gold drags Nicole into a platoon of unimaginable problems—ones from which she’ll have to find the courage just to survive.
VampBard’s Take:  Cute little beginnings of a PNR.  I was pretty drawn-in by this title, as well.  I particularly enjoyed the British language conventions.  Things like that hook me on a story.  If you like shifter stories, this is a great read.  I think I may have also found a new author to read, as I liked Belfield’s style.  The heroine, Nicole, a.k.a. Cole, seems like a no-nonsense, not-to-be-bossed-around-by-a-dude type.  I like strong heroines; she ended up saving the day, too!  Benjamin, our hero, is hot, sexy, and has an awesome little secret!  Rawr!
4.5 stars: Loved it – enthusiastically recommend (A)
Overall Thoughts:  Make Believe is a stellar anthology of short stories, touching the sci-fi, paranormal, and fantasy genres.
I enjoyed the red cape through each story, the common thread interweaving all the shorts.