Soul Avenged
Author: Keri Lake
Release Date: Jan. 16, 2013
Publisher: Self-published
Sons of Wrath, Book #1
ISBN: 978-0984851720
Genre: Paranormal Romance
Format(s): paperback (534 pages), e-book
Book Source: Author
About the book:
Passion is blind in vengeance and love … Ayden’s suburban home was invaded by a pack of Lycans. The brutal attack is the only memory she carries of her former life. Now, one motive burns in her soul: KILL THEM ALL. The Sons of Wrath—a brood of vengeance-dealing warrior demons—band with Ayden to hunt the Lycans on Detroit’s most deadly feeding grounds. Kane Walker should’ve been her easiest kill. Unfortunately, the newly bitten Lycan has something she wants—clues that may finally lay her past to rest. To reach them, she must be willing to submit to the sensual pleasures awakened by his touch. Time is running out. In seven days, Kane will become what Ayden despises most. She can halt his transformation but the antidote requires the ultimate sacrifice. As the beast takes hold, Kane becomes more of a threat. Ayden must choose between her lust for revenge, or surrender to her enemy and discover a horrible truth.
What VampBard’s talking about:
Keri Lake brings a well-crafted world of paranormal deliciousness to readers with Soul Avenged.  The first title in her Sons of Wrath series brings a world of sensual dreams, emotional turmoil and skillfully delivered carnage to the reader.  Fabulous description, details and delivery made this book the cause of sleep deprivation.  That’s always a good thing!
I’m not going to lie.  I have a lil girl-crush on Ayden.  She is so entirely kick-ass!  Besides being hard-core, Ayden, the central character in Soul Avenged, brought the reader a fabulous gift:  selflessness in the face of adversity.  Ayden wasn’t the only character to reach this lofty goal.  Kane, Gavin and Logan (to a certain extent) all managed to put others before themselves.  That is one difficult objective to meet, Ms. Lake.  Kudos.   HEAT INDEX:  I’d call this one a 4 out of 5.  The last third was smokin’, though…and the sexual tension through the entire title was crazy!
There were a few usage errors that made me stop & re-read some passages, but I liked this book sooooo much that my rating hasn’t been affected; content definitely trumped the few errors that caught my attention.
Logan, one of the Sons of Wrath, put Calla before himself, and potentially paid the ultimate price.  I think we’ll have to read the next installment of the Sons of Wrath to see the outcome.  I seriously love Logan, though.  He’s a bit of a free-spirit and a loose cannon.  He’s loved by his brothers, especially Gavin.
Gavin is obviously in love with Ayden.  He wants her to be his mate for eternity.  There was a serious love triangle vibe going on when Ayden was staying at the mansion with Kane, though.  For the longest time, I didn’t know whether Gavin was going to slaughter Kane or not.  Because he is a gentleman, and loves Ayden much more than he lets on… well, you’ll have to read this title to find out.  Just know that Gavin is the sweetest, most compassionate Son of Wrath, in my book.  The end practically KILLED me!
Kane.  Ya gotta love a dude with the name Kane.  I’m immediately flashed to Gena Showalter’s Lords of the Underworld, and the Kane from that series.  THIS Kane, however, was turning into a shape-shifting lycan.  What I liked the most about this universe is that lycans can shift into any animal – not just wolves.  That was definitely a unique spin on the typical werewolf story.  I grew to love Kane.  While he was held captive by Ayden, he never seemed to focus on the fact that he was captive for his last days as a human.  He was selfless in allowing Ayden to view memories, and had no reason to be even polite to her – he was being held prisoner against his will.  Even more than that, however, Kane seemed to be the person that wanted Ayden to be more than the cold killing machine she’d been forced to be.
Ayden, the kick-ass heroine of this story was one of the most selfish people I’ve ever seen in a book until she had an ‘aha!’ moment toward the end of the story.  I didn’t like the way she treated ANYONE in this book, but realized at the end that there was sufficient reason for her behavior.  I swear, Ayden gave me whiplash.  I couldn’t decide until at least half-way through the book whether she was going for a HEA with Gavin or Kane.  For awhile, I thought there might be some menage going on eventually.  I am really glad, however, that Ayden became selfless once she realized who she really DID love.  The selflessness that Ayden conjured to save the man she loved was nothing short of inspired.  She couldn’t allow him to die, and didn’t want to live if he died.  Argh!  No spoilers… Read. This. Book.
I have no idea how I’m going to wait until the next title in the Sons of Wrath series is released.  I have to know what happens with…. um.  Everyone.  If you can’t handle major cliffhangers, wait until the next title in the series is released, and check to make sure it’s not also a cliffhanger.  Adding a new series to my auto-buy!  Keri Lake’s got it going on with Soul Avenged, and now, since I’ve finished this title, I’m off to catch up on my sleep.
VampBard’s Rating: 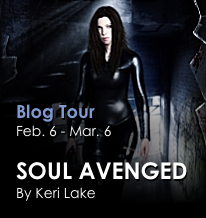